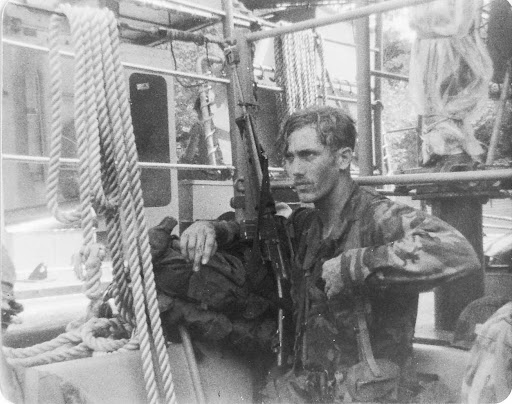 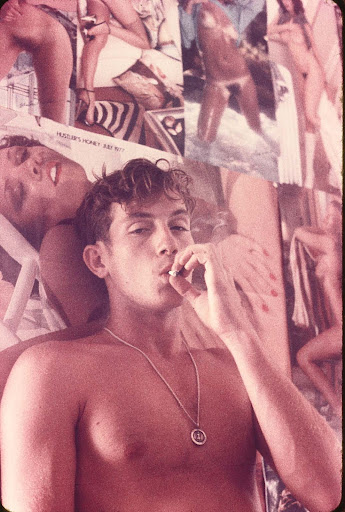 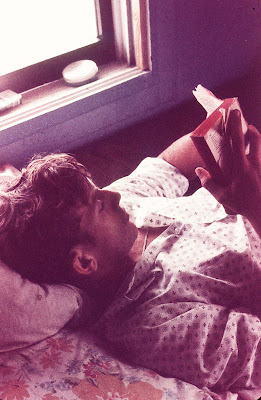 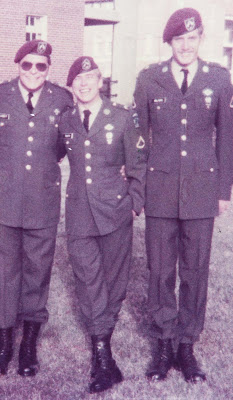 Bob Claggett, me and John Walters
John Walters was a cool breeze that blew into Ft Bragg from Los Angeles. He was tall, quiet and stoned to the bejesus most every time I saw him. We went to Panama together with the 1/325. He was almost the perfect soldier in that he looked like a soldier was supposed to look -- Except that 'stoned' part.
John and I enlisted about the same time but he went in for three and I did four years for a $2,500 bonus paid after Infantry school. At his ETS (Estimated Termination of Service) party we doused his bus driver hat in lighter fluid and lit it. Six of us stood around a circle and peed on the flames giving real meaning to, "If you were on fire I wouldn't pee on you to put you out."
John bought Bob Claggett's '63 Dodge Dart with push button transmission and that was just as well. John had borrowed my '68 Dodge Charger one afternoon and rear ended a parked army pick up on main post.
He was of course stoned and I learned, at 19, never to loan your car to someone who is stoned. A buddy in JAG made the claim disappear. Anyway, the morning after his ETS party, John loaded up the Dart with everything he owned and left Bragg long before any of us woke up.
Two days later the Texas Highway Patrol found the car abandoned on the side of the highway. They were looking for John and tracked him to us. A couple days later he called from L.A. and explained the engine blew. He crammed a few things in his Alice ruck along with his ETS orders and hitched home.
We never heard from him again. Not that that was unusual. But he was the only guy I ever knew in the army who wore pajamas. That was most unusual.
Posted by tintin at 15:03

I would have guessed that John Walters in Panama is was Che' Walters preparing to invade Cuba.

Just goes to show ya!

ANOTHER great story, memorable guy... thanks..

Photos like that actually make me miss the Army. Well, just a little bit. Except for the hair they could have been taken at the 2d Ranger Bn, circa 1981.

Remembering all those friends you'll never be able to track down is a little melancholy, but it's better than never having known them.

Brohammas- We were trying to invade Colon.

Silk Regi- It does.

Zambo - Many more stories about John W but people here have the attention span of my fox terrier.

I tell ya what I miss. Take a look at those pinups. Kids these days have never one of those in the wild. Probably scare the crap out of them if they did. Gotta love a brunet. Later Charles

Great story. Thanks for sharing. I sure as heck enjoyed my time in the USAF (1999-2003). I stayed in an extra year because I was on stop-loss.

I ETS'ed in '89 from Panama. Leaving the Army from a foreign country with 10 minutes notice prevented me from saying goodbye to the close friends I had come to know over the perevious 2.5 years. I tried to track down some guys over the years without success. Two weeks ago through the magic of Google I was able to find the LinkedIn account of my old roommate, he lives in Shanghai of all places. He called me late one night last week and for the first time in 22 years we were able to catch up and fill in the very long gap, it was like being a time traveller. All The Way!

It brought back memories of "Carter", a six-year E-3 on board CVN-65, I think he had been busted down 3 or 4 times, it was amazing he was still in the Navy.

He was the one that taught me the way the real Navy worked when I was fresh out of boot camp.

you sure like posting pictures of young men...just sayin'

didn't know you were so short too that explains... a LOT

Come on, you must know where this guy is. Spill the beans.

so fucking good. hope he tracks you down,
foster

Charles- That was my montage in a corner of an old WWII barracks. It was something to behold.

harold- I had a two year inactive contract on top of the 4 year enlistment. Nothing going on when I got out but I spent a year in a Public Affairs National Guard unit in FL. I don't think those guys ever broke starch or shined boots. I should'a stayed.

Jeff P- Do you remember the names of the whore houses in Panama City. I'm working on something.

Farmer JOnes- Those guys are everywhere. I knew a 8 year vet nick named Mud Bone. Drank Schiltz Malt Liqr at 5AM, smoked Kools and claimed to have had the clap six times. He was a Spec. 4 who had been busted a number of times -- usually for AWOL. He had a face that looked like the moon.

Anon- No idea where he is. I don't think a guy like Walters was into staying in touch. It would break my heart if he was on Face Book.

Foster- Experience tells me I hope he doesn't. Meeting old friends can be like meeting a famous actor. Once they start talking all the magic is gone.