Funking Out With Billy Reid & Snatch and the Poontangs

I exit the elevator at the seventh floor of Saks Fifth Avenue and the low hum of disco, funk and R&B hits me. The songs are good. Thankfully the volume is set at conversational volume instead of the standard ear-bleed level at most fashion events. It's a recognizable tune, even though I've never heard it before. It's been copied, sampled, and reinterpreted a few times over the years. The tune is comforting in its strange familiarity. 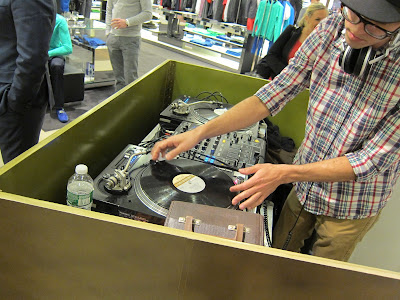 Nick Sullivan of Esquire magazine sits down to speak with designer Billy Reid and have a conversation about his eponymous menswear collection. Eric Jennings, the creative director at Saks, rounds out the rest of the panel. The conversation is light and friendly. It follows the career trajectory of Billy as he started, stumbled, redirected, and refocused his fashion career over the last few decades. 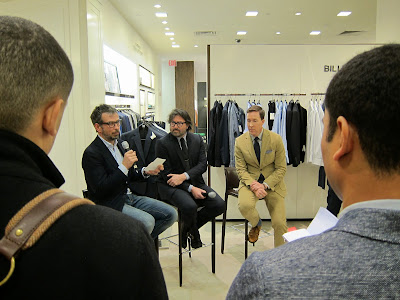 Growing up in the South, seeing his mother's clothing shop located in his grandmother's house ("It was like 'Steel Magnolias' but with clothing") seems fated to result in a fashion designer son. It didn't. Billy's involvement with sports lead him to studying Physical Education in college. Failing out of the P.E. program led him back to design and a career in selling and designing apparel. 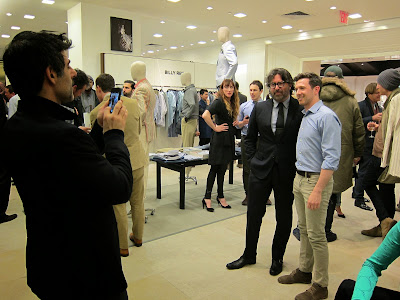 The newest collection is solid. It's made up of easy to wear, mix-n-match pieces. That is what appealed to Nick when he saw Billy's work the first time. These are "clothes that are familiar to wear" he commented. Nothing is too "fashiony." Nothing is gonna raise a disapproving eyebrow from your sweetheart if you wear it. They are staples of a man's wardrobe, crafted with an exacting eye. Changing a detail here, using an unusual fabric there, the collection feels familiar to what's sitting in your closet, but it's done better. 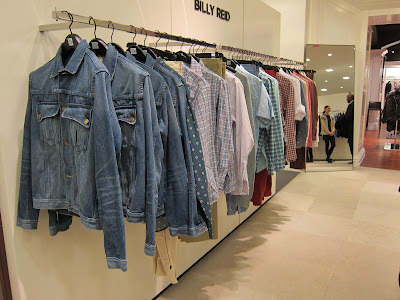 Billy makes clothes he believes in and are inspired by the world and not just the South. It's a struggle for him not to get pigeonholed in Americana. He's reinventing himself to stay current. It's not about just fixating on some dusty archives from the 50's and 60's and staying put. It is about how you interpret that and make something new. That's what Billy does. 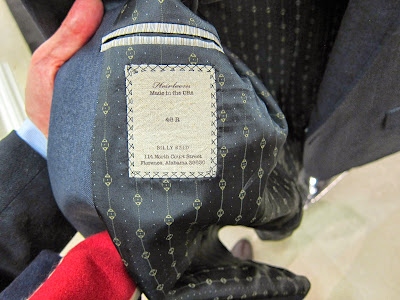 The gentle beat of the funk and disco comes back as the conversation draws to a close. It's a new track I've never heard before.

A couple weeks ago, the fella who reported this story was at a party and we wound up shooting the shit during what was a circus of swanked up Dandies at a Paul Stuart event.  Standing on the staircase landing, we talked and watched the violently affected parade by.  All that was missing was the guy in coveralls with a really big shovel.  Matthew tells me he wants to write and asks if I'll help.

I give him a look and wonder if he's having problems with his computer 'cause I damned sure am having problems with my recent conversion from PC to Mac.  But he tells me he wants actual help with   writing --  I assume for nothing despite my sterling reputation in men's phassion.

I agree,  based largely on one single test he passed.  After having drinks and dinner at my apartment, Matthew sent a 'thank you' note.  Of all the assholes who have Hoover-ed food and drink in my apartment for the last six years, I have only received thank you notes from Matthew, Alice Olive and ELS --  And ELS and Alice don't really count because they're girls and not from this country.

I like the Shuggie Otis album Matthew insisted on including and it's linked in the first paragraph.  As a brief aside, Otis rang a bell from my youthful '70s obsession with funk (archived here and at a storage facility in MD.)  Shuggie and his Greek Dad, Johnny Otis, did the 1969 album, Snatch and the Poontangs, which was rated "X." Shuggie, by the way, was 16 when it was recorded.

I knew a drill sergeant who stole cadences from 'Snatch.' Or, Snatch stole from my Drill Sgt, regardless,  I'll never forget,  "Among the whores you might hear my name ring - But a bitch with a head shaped like a four way cold tablet liable to say any God damned thing.  And,  "...I'd climb over 50 pussies to get to one fat boy's asshole." There's more in the video below if the spirit moves you and I can only hope "Snatch and the Poontangs" will get some more airplay.   I'm gonna recommend it to Mordachai Rubenstien for his new radio show, Voices Inside My Head.  Tune in Thursday nights at 8PM and be sure to me that 'thank you' note. 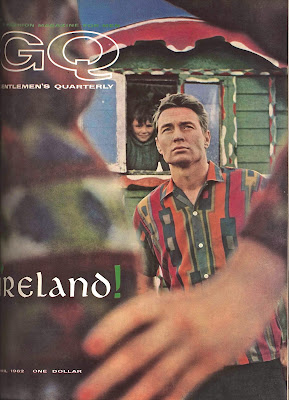 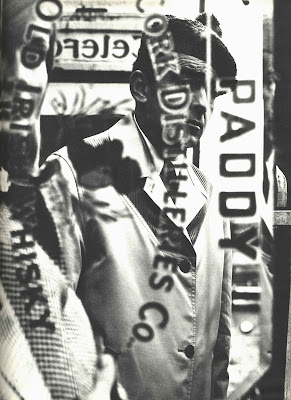 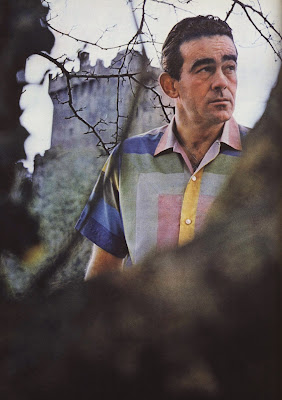 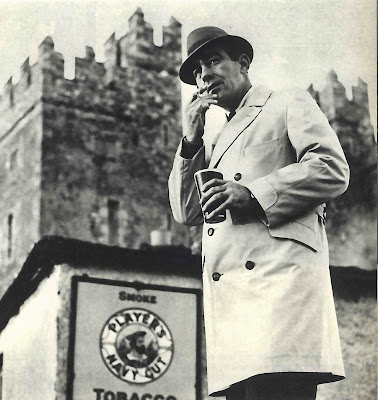 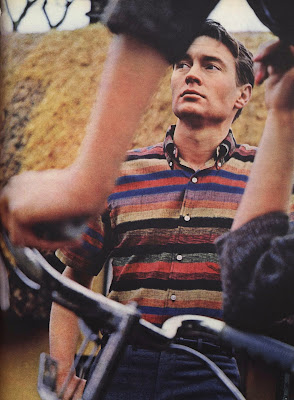 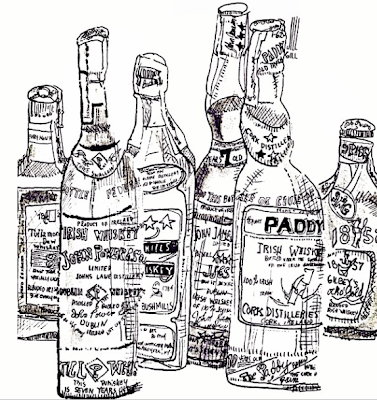 While GQ seemed to be the smaller and more intellectually challenged little brother of Esquire, and I've waded thru years and years of both….GQ, for a time, stood on firm turf in the early to mid '60s... both visually and in the writing.  This April issue celebrated Ireland and it has a moody and dark attitude.  I love it.

An GQ is not easy to find and this came from a bound volume so scanning was a challenge.  However, inspirational ideas, fashion jargon for 'stealing,' are everywhere despite the binding.  Not only in unique layout, photography and stories but in the apparel itself.  The nubby stripe shirt reminds me of nubby silk Rooster tie stripes -- A mitre madras shirt reminds me of…nothing. It's unlike anything I've ever seen and I'd kill to have one today.  A rain coat with hacking pockets and sleeve turn ups?  I'd buy that.  I'm even saving up for a Jill Gill - - the NYC artist of all those beautiful whiskeys.

I know fashion designers dig thru these old mags but do fashion editors?  I'm guessing most do not.  And for the very first time, during NY Fashion Week, my hunch was confirmed from widely divergent sources regarding what we'll call,  "Fashion editor illiteracy."   "He didn't know shawl from peak."  "Zip knowledge of apparel history."  "I had to explain canvas construction." "All he liked was black." You get the idea.

I sat in front of Nick Sullivan at Esquire and in a couple minutes he showed me a 1950's Mac hanging on the back of his office door and pointed out the construction suggesting it might even be my size.  We discussed the military influence of clothing and why stealing unit insignia was not only vulgar but unnecessary.  And sure, there was the 24 hour "shoe-cam" which was monitoring what he wore on his feet everyday…but the man was fashion literate.  That much you could not argue.

G. Bruce Boyer bemoaned the GQ of today doing a 20 page spread on jeans and t-shirts.  It's what they know, Bruce.    But I'm guessing there's an archive somewhere in that GQ office and I'd like to suggest it would be a lot more fun to go thru than the PR pitches.
Posted by tintin at 16:55 8 comments:


In the year ‘98, when our troubles were great
It was treason to be a Milesian.
And the black-whiskers said we would never forget
And our history shows they were Hessians.
And in these troubled times, it was a great crime
And martyrdom never was riper
Near the town of Glenshee, not an acre from Meath,
Lived one Dinny Burns, the Piper!
Neither weddin’ nor wake would be worth a shake
If Dinny was first not invited.
For at squeezin’ the bag, or emptyin’ the keg,
He astonished as well as delighted!
But in these times Dinny could not earn a penny,
Martial Law had him stung like a viper!
And it kept him within till the bones of his skin
Grinned thru the rags of the piper!
Now one day it did dawn, as Dinny crept home,
Back from a fair at Lethangin,
When what should he see, from the branch of a tree,
But the corpse of a Hessian, there hangin’!
Says Dinny, “These rogues have got boots, I’ve no brogues!”
He took hold of the boots wi’ a griper,
And the boots were so tight, and he pulled with such might,
Legs and all come away with the piper!
Ah, then Dinny did run for fear of bein’ hung
Til he came to Tim Haley’s cabin.
Says Tim from within, “I can’t let ye in!
Ye’ll be shot if you’re caught out there rappin’!”
So he went to the she’d where the cow was in bed,
He began with a whisper to wipe her,
And they lay down together, in seven foot of heather,
And the cow took to huggin’ the piper!
Well the day it wore on, and Dinny did yawn,
And he stripped off the boots from the Hessian!
And the legs, for the law, he just left in the straw,
And he slipped home with his new possessions!
Now breakfast bein’ done, Tim sent his young son
To get Dinny up like a lamplighter,
And the legs there he saw; he flew up like a jackdaw!
And said “Daddy, the cow’s et the piper!”
Ah, bad luck to that beast, she’s no musical taste!
To eat such a jolly old chanter!
Ah, faugh! We’ll evict! Take a lump of a stick!
Drive her off, down the road and we’ll canter!
Well the neighbors were called, Mrs. Kennedy bawled,
She began for to humbug and jiper,
And in sorrow they met, and their whistles they wet,
And like devils, lamented the piper!
And the cow she was drove a mile or two off,
And they came to a fair at Killaley.
And there she was sold for four guineas of gold
To the clerk of the parish, John Daley.
And they went to the tent where the pennies were spent,
Tim bein’ a jolly old swiper,
And who should be there, playin’ the Rakes of Killdare,
Just your bold Dinny Burns, the piper!
Ah, then Tim give a jolt like a half-drunken colt,
And he stares at the piper like a gammick!
I thought, by the Powers, for the last sev’ral hours,
You were playin’ in the old cow’s stomach!
Well when Dinny observed that the Hessian’s been served
Began just to humbug and jiper,
Oh, in grandeur they met, and their whistles they wet,
And like devils they danced round the piper!