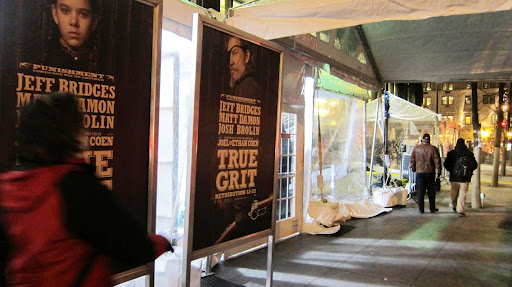 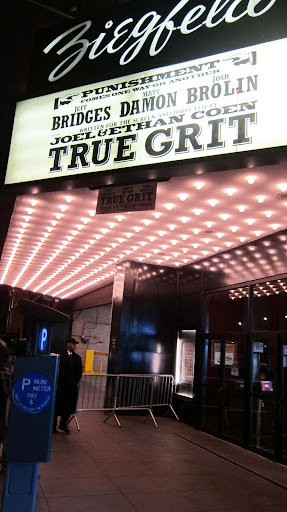 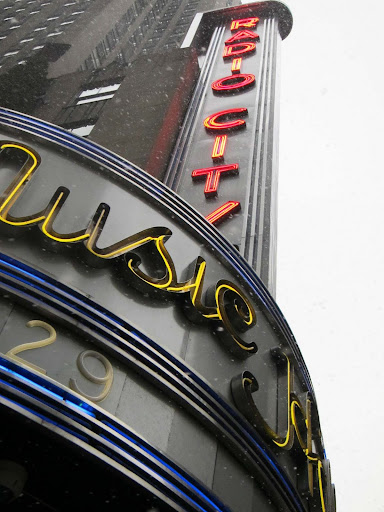 I first saw True Grit on July 20th 1969 at Radio City Music Hall with my grandmother. We took the train from Greenwich where I was spending a summer with my grandparents and aunt and uncle. The day before news broke of Chappaquiddick. I would soon be 12 but remember being confused by the news and the whispered speculation in the living room.

I was not confused by True Grit. I was attracted to Kim Darby, worshipped John Wayne and had to know how Glenn Campbell got his hair to part like that. I'm not sure if the movie had an intermission but the film was stopped and an announcement was made inviting us to the lobby.

People mulled around televisions in a huge space filled with light and cigarette smoke as we all watched Apollo 11 land on the moon. The contrast to earlier news was lost on me. All I remember was wanting to get back to the movie.

True Grit stayed with me for years. A soundtrack my father always played. My love for Kim Darby never faded despite her not answering a fan letter and Christmas card. The Duke is a close second to The Great One who is first on my list of childhood idols and I gave up on Glenn Campbell's part.

I saw the Coen Brother's version of True Grit yesterday afternoon at 4PM. Watching the movie was like remembering a map from 40 years ago. Things had changed but I knew where I was going. Sadly, there was news as well. I can't even begin to understand what happened Saturday. As I grow older it seems there's even less I understand. But like that map...I have a sense I've been down that road and I'm worried about what's coming.

No doubt there was an 11 year old boy in the audience last night. I wonder if he'll see a remake 40 years from now. It will be 2051. He'll remember the beauty of the Ziegfeld theater, the charm of True Grit and he'll understand those last words of a much older Mattie Ross, "Time just gets away from us."
Posted by tintin at 11:33

Go see "The Fighter"...it is a tremendous move and Christian Bales certainly should win "Best Supporting" but may indeed deserve "Best Actor"

The Great One? Roberto Clemente?

have you seen the King's Speech yet angel muffins? It's good.

Please. Everyone knows The Great One is Jackie Gleason.

The saddest part of your story is the lack of a modern moon landing.

it's not the critic that counts, sugar plum, but the man in the arena.

I couldn't figure out Campbell's part either. I'm looking forward to seeing the remake, but I'm such a curmudgeon I can not sit in a theater anymore. So I'm afraid I have to wait for on demand. The Great One is Steve McQueen?He is my number 2 at any rate.

I'll wait for the bluray to come out, since my wife won't watch a weatern, and I can now watch a bluray in simulated or real 3d, depending on the movie... True Grit in 3d sounds odd, though.

I remember that same time getting pulled out of bed by my dad to see Apollo 11's landing. The significance to me then was that we had been at the liftoff to see it on its way in Florida. And one of my favorite memories of that was my sister sat on a red ant hill and got bitten all over. To a 5 year old, that's a good day all around!

I thought it was common knowledge that "The Great One" was Marty Feldman!

I'll always remember the moon landing (my dad worked for a news organization) and the Safeway shooting (my uncle was inside the store), but I'll be damned if I can remember a thing about True Grit, except for how badly I wanted a hat like Kim Darby's.

Nicely tied together. I remember '69 being tinged with angst from the two '68 assassinations. I was a youngster, a child really, but that decade flew by. I love the Cohen Brothers and their darker take on True Grit fits my seasoned perceptions. I enjoyed this very well written post.
CH

Gave me chills. Just damn good stuff. This is classic Trad, and why I read it.

'Going down the road, feeling bad..'

Wonderful post. You have a better memory than me.

The older I get, the less I understand about what it takes to make a good photograph...

I tried to resist. But I failed.

Just sent an email to your alma mater suggesting they add your name to their upcoming Spring semester Writers-In-Residence program. Yes, the usual is well represented. But hello to the new age of blog writing/reading. If they don't already know, they need reminding that one of their own is holding his own in the global blog brand category.

To a 10 year old girl in Miami, FL in 1969; True Grit on the big screen was magic. John Wayne was magnificent, the scenery was breathtaking and I wanted to BE Kim Darby. It's always been one of touchstones of a truly great movie.

I'm looking forward to seeing it again too. Remember when Mattie threatens Rooster with Lawyer Daggert! Most remakes are a disaster but all reports suggest the Coens have brought it off. Nice to hear it confirmed. A word on the King's Speech which someone above mentioned. Saw it a couple of days ago, the usual oversimplifications you get with history movies but a truly incredible and moving performance from Firth.

Main Line- Have you seen Requiem for a Heavyweight?

Anon the Muffin Man- Yes it was. Surprised you like. It being a 'pity party.'

Jeremiah- Pay no attention to them.

Bro- I don't think we could unless it could show a 500% profit and be done in the Maldives.

James- The Great One is Charlie Bratton, Rudy the Repairman, Rum Dum...

Curt- I had to drag the GF to True Grit. Not a western fan either. The moon landing was just after 4PM on the east coast. I think the moon walk was the next night around 10:30PM. Did you mean the moon walk?

Patsy- I think that's why Darby's career never got going. She never got another great hat.

Chuck- The remake is well done. Although, it makes me wonder about all this, "I never saw the original movie" coming from everyone involved with the remake. They all claim to have read the book but never saw the movie. And we all know that no one in Hollywood has read a book in the last 40 years.

Zamboni- I need to ask the Great Zamboni about chicks in Romania.

DB- I can't multiply fractions but I remember what Cheryl Stewart was wearing when we French kissed in a church basement 40 years ago.

The View- I saw The Wild Bunch maybe a year or less after True Grit and it's an amazing contrast. Of course, Butch and Sundance were somewhere in between...

Yes, he's the headliner [just as he was here last summer, taking much stage time to endorse his daughter's writing career, can't hurt]; but the point I made is that your contribution to letters, unlike Conroy's, is an entirely new writing genre that merits representation on a contemporary writing panel, so why not one of their own who happens to be a serious writing brand scoring 80,000 new readers per month.

Flo- You may not know how many times that school tried to kick me out when I was a student.

Dude- Someone has linked Vera Bradley to this post.