Cold Shot To The Heart 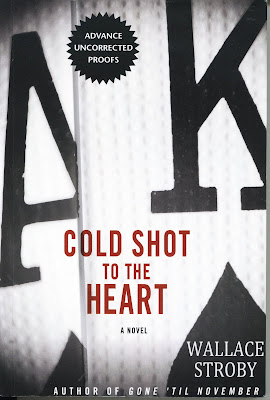 I've known Wally Stroby for 30 years. We drank the heart out of a cool August night on a London sidewalk and could barely raise our arms to get a taxi. We've traveled for days on I-95. Me listening to his shitty music. Wally listening to my shitty music. I love him like the brother I never had.

We shared a house one Summer next to the food stamp office on Weeden Street in St. Augustine. Wally worked 'til 11 PM and when he came home he'd sit in the living room with the lights off and watch the roaches come out and eat ashes out of my government ash tray.

In college we called him the man in black. His favorite color often matched his mood. It's no wonder he turned to crime noir. His fourth novel, Cold Shot To The Heart, features Crissa Stone, "...a pro. She never works close to home, never works with the same crew, and never rushes a job."

Crissa's a character I'm not fond of. Stroby's first two novels followed retired NJ state trooper Harry Rane around. Trad Dad's one sentence review of Harry was, "He's always putting his dick in places it doesn't belong." Crissa lacks a dick but she sure does get a lot of her friends killed.

All by a character I did fall in love with. Eddie the Saint. Eddie, just out of jail, pays a visit to Casco who owes Eddie $40,000.

"Casco leaned forward, brought out a red ledger book bound lengthwise with a rubber band. He looked at Eddie, put it atop the safe.
'What's in the back?' Eddie said.
'Where?'
'In the back, on that shelf.'
'I don't see anything.'
'Get down there and take a look.'
'Eddie, I got a bum knee.'
'You're younger than me. You'll be fine.'
'I swear, Eddie...' He knelt, winced. 'I don't see anything.'
'All the way in the back there.'
When Casco leaned forward, his face in the safe, Eddie put a foot between his shoulder blades to hold him there, shot him twice in the back of the head. ...The sound of the shots echoed off the paneling. Brass clinked on the floor."

Eddie's a stone cold psychopath but with a certain style that reminded me of Johnny Harrow from The Heartbreak Lounge. But Cold Shot ain't bad. It's clunky in the beginning, there's a poorly researched rappelling scene and Crissa stores her wine on top of the fridge but at 80 pages the story hit a patch of black ice and slammed me to the ending.

"Nothing behind her now. Nothing but the night ahead. But she had a name, a suitcase full of cash, a car, and a gun. It was a start."
Posted by tintin at 13:57

Well, it's prose a bit bloodier than I usually go for, but you sell it well.. last book like this i read was probably Jim Thompson. Talk about twisted.
z

Z- With each novel, Stroby's demonstrating he's got the literary muscle to be shelved with the big guys - Elmore Leonard, Jim Thompson and Richard Stark."

I still gotta read Stroby's last one -- the Florida/AK-47 bit. This sounds interesting too, and I actually appreciate novels that take their time with set up. No ADD here.