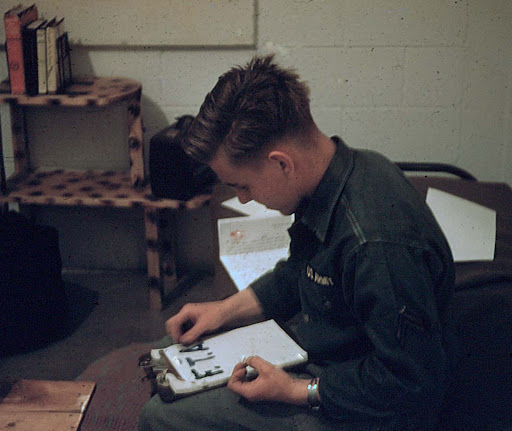 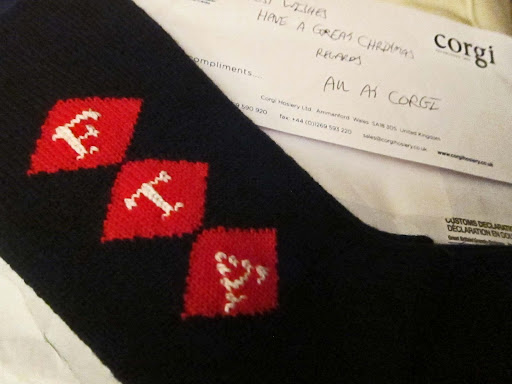 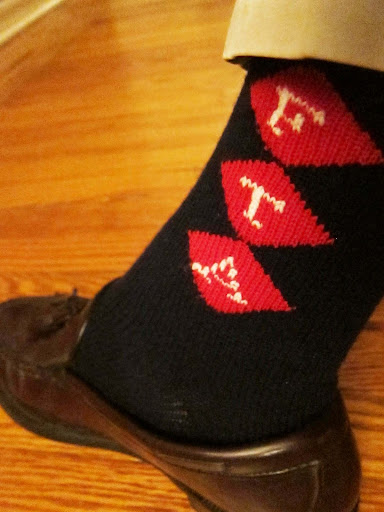 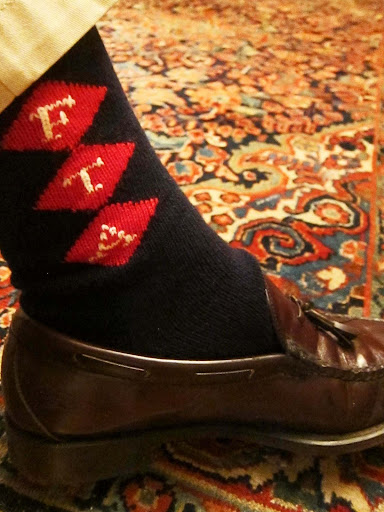 There's been a lot about the military this week on The Trad. Too much judging by the comments and I understand. Even the Golf Foxtrot told me I wasn't in the real army. I asked what she meant and she said, "You weren't shot at were you?" No. But I was chased by a pimp down Hay Street.

F.T.A. is the enlisted man's proud lament for what he thinks of the army and there's real tradition here. Dad used it as young corporal in the '50s. Who knows how far back it goes. There's a real sense of socialism in the military -- you're in the same boat with everyone else. When a man threw his arms up in frustration and shouted, "F.T.A." you knew of what he spoke and from whence it came.

It should come as no surprise that when Corgi offered me monogrammed socks and asked for my initials -- I said no. I wanted something that really sang and told my story. They're cashmere, navy and the monogram runs on both sides of each sock. Now, when I cross my leg on a bar stool at the King Cole, someone might notice and say, "FTA? Were you in the army?" And I'll say, "Not the real army but I was chased by a pimp." And that's how you meet the very best people.

One of the things I like about you is you know not to take the world too seriously. A rare gift these days.I was chased by a streetwalker in a train station in West Berlin circa 1968, can we start a club?

Of course, when you cross your leg on a bar stool at the King Cole, I'd be thinking, "Well I guess his initials are FTA." But I know nothing of the army or navy. Just a little about the RAAF (the Australian air force) due to a fling a long time ago in another hemisphere far away. He was also never shot at.

My father, when asked about being in the service or Vietnam, says essentially the same thing, "not really." The army sent him to Vietnam, but he was an English major and typed quite well, so he was always behind a desk, he didn't shoot at, or get shot at.

As a complete and utter civilian, I feel comfortable saying like you were certainly in the army enough to talk about it. Moreover, you only ever speak about what you have an authority to speak on (occasionally getting flack from officers and friends, and as you mentioned, being chased by a pimp). Write about what you know. Well you know this.

And it doesn't take a vet to get irate at the co-opting of tradition for fashion. When I visited the Gieves & Hawkes store in Tienjin, China, they were selling patches for the Order of the Garter, Grenadier Guards and Coldstream Guards to the general public. $10 American. I was staggered.

Perhaps the best monogram ever on a pair of socks. I think it might have strong commercial application for OD boot socks in particular.

while i'm not sure i agree with your opinion of the previous post (the army NCO creed states "to bring credit upon the corps, the military, and my country regardless of the situation i may find myself". too bad the navy doesn't ask the same of her line officers...but that's just me), i most definitely do not agree with the golf foxtrot's opinion of the "real army". that holds about as much water as the claim of "real americans". if you wear the uniform, and you serve - hopefully honorably - you are in the real army. period. i'm trained as a fueler, essentially a glorified gas station attendant, but i have drilled on squad tactics, how to clear a room/hallway/building, how to field dress a wound, and how to approach an IED. army is army, no matter what crosshairs you look through.

and yes, the army is the biggest socialist organization in the country- all ranks are paid the same, according to their grade, everyone's guaranteed a job, and all get "free" healthcare.

we now return you to your previously scheduled blog post.

A) You probably were shot at (advanced training uses live rounds). But funny line just the same.

B) Is it better to be shot at now in a hot war or know you'll see no combat in the action vacuum of the '70s? Just asking.

C) At least three out of four of those letters anyway are yours AND your dad's initials...

D) How is it possible that anyone thought enough to get a shot of your dad doing that...in color...inside...without a flash...in the '50s?

"Real Army?"...nonsense. When you were in you had no way of knowing if you were going to be shot at or in a pitched battle anytime, anyplace in the span of a few days or weeks.It was merely luck of the Geopolitical draw that youe were serving at a time when noting required your deployment in harm's way...Nevertheless you and you fellow soldiers were trained and ready should the need arise...and that seems to me to be what is important.

had a conversation about the navy knucklehead yesterday. we concluded that anyone with the balls to volunteer to fly jets from, and land them on, tiny runways on the decks of ships bobbing around on the ocean should be given the latitude to throw on a bikini top every now and then. God love 'em! To those too polically correct to see the humor or understand the value in letting it all hang out, here's a rifle...forward march.

In your case you signed up, jumped out of planes, took what was thrown at you and lived to tell about it with a great big smile on your face and a GF who gets the joke. maybe just lucky all the way around, but seems real enough to me!

Ben- You don't mean this place do you?

All I can think of to compete with that is WTF.... fanatastic...
Zambones

At first I applauded the GF for her application of her hat pin to Tintin's machismo. That thought satisfied me for most of the day. Then it occured to me...lets ask her jump out of a perfectly good airplane... onto a frozen lake...in the dark...:)

"we concluded...should be given the latitude to throw on a bikini top every now and then"

Unfortunately, the politically correct (who obviously lack that unique ability to assess leadership qualities) included the four star admiral who fired him.

Nice socks, but I wouldn't order a pair for my nephew at West Point.
Now my brother in the Navy... he would wear them with pride.

Tintin…I know you don’t fly this blog as a platform for this nonsense, but…really Joe?

You mean a four star leader, and others so ranked, were so talented that he managed to overlook, for four years until it became public, an indiscretion so egregious that an otherwise honorable career should be shot down in flames. Maybe admiral four star should be canned too for such dereliction of duty.

Nobody said that politically correctness and ability to assess leadership were mutually exclusive. Your making stuff up Joe…perhaps another tendency of the pc? Take a nap Joe, you clearly need one.

Hey man, you were jumping out of airplanes when I wasn't. With the chance that, somewhere, down there below you, there was some guy with a gun looking up. You were in the real Army. Thank you.

In case anyone was wondering, FTN was used quite frequently in the NAV by both officers and enlisted, although not that often while on a WESTPAC cruise to the PI, Thailand and Australia.

During those time, most sailors were trying to figure out how they could get their buddy from home to save some money and get a flight to Manila.

James- I had a hooker follow me through Times Square in 1990 and she kept lowering her price. She got down to $20 and I told her she was far too beautiful for that.

Alice- Wow. An aviator. It suits you.

Anon- The stats on VN is only 10% of the US military were combat troops. Not sure what that % would be today.

Li- G&H should be keelhauled for that.

Oyster- You may have hit on a brilliant idea. Which means someone has already stolen it.

Skorp- Do you remember the commissary with military food items? Man, we were way ahead of the generic trend. It amazes me our dads risked thir lives so the guy who owned the stereo store off post could charge 33% APR.

DB- They are very nice socks.

Main Line- We were training for WW III for most of the late '70s and then everything changed in 1980. Everybody was talking of high intensity and short duration. I wonder how the army knew the Soviets were no longer a threat.

What a hoot. Real style.