Getting Dressed -- To Undress 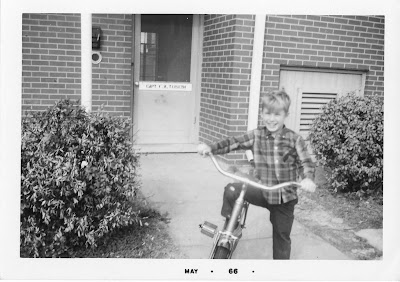 Someone asked, "Why the life long obsession with clothes?" I really have no recollection of what I wore until I was 12 or 13... 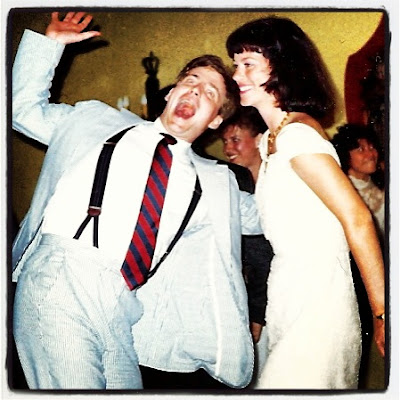 and that quickly evolved into getting dressed so that she'd get undressed. 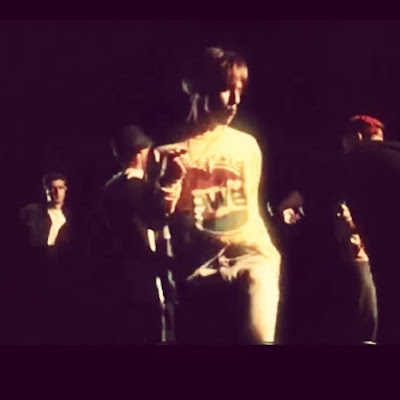 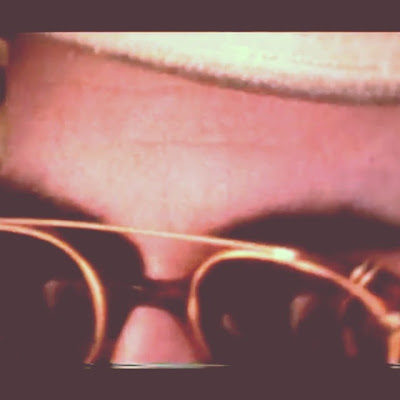 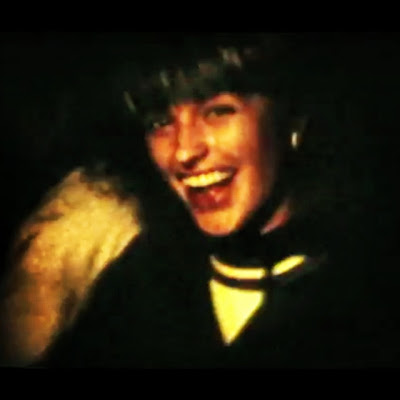 One Summer night in 1990, I was offered Ecstasy at the Roof Gardens in London. I turned it down insisting Becks took care of me just fine. I watch this video with more than a little regret.
Posted by tintin at 07:47 8 comments: 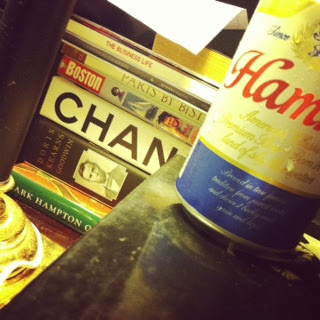 Like me, the Old Man cheated when it came to beer.  Not the one to marry a brand, he had affairs with Coors, Black Label, Old Milwaukee, Olympia and Ballantine -- And even though he was a proponent of drinking local beer -- that wise advise would be put aside if beer from a world away was on sale.  It never fails to surprise me how much we are alike.

I remember Hamm's in our house when the Old Man was the Public Affair's officer at NORAD and we were living in Colorado Springs.  That was '73 and '74.  I don't remember seeing it much afterwards.  I'm sure it was around but it was off my radar...until last week when I saw it selling for $5 a 12 pack.  Brewed by Miller, it's been available out west but seems to be moving east.  And it ain't half bad --  but I also like Bud Lite Lime so fair warning.

Hamm's, and it's a pleasure to say, "Hamm's," is a little like a full wine.  Not insipid at all but rather full and malty.  It has a pleasant mouth feel and I like it in the can -- With smoked almonds or a big white cheddar on a Triscut. At less than .50 cents a can, it's a no brainer.  If you see it - pick it up.  I reckon it's already got a good head of steam with the sock-less and blistered hipsters. I'm looking for it on tap...which I'm guessing is better than getting it in the can.
Posted by tintin at 12:55 12 comments:

Wintertime at the Jersey Shore, 1982 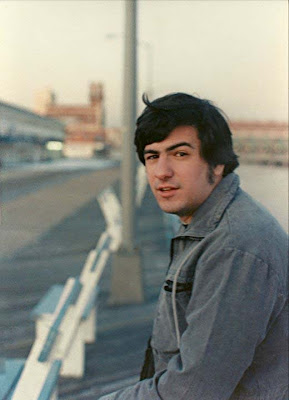 There's a series of photos from Asbury Park on the New Yorker web site here. 'Evocative' doesn't seem to do the 1979 series justice.  My shot of Wally, a Long Branch native,  was taken on the coldest day I've ever experienced...and I lived in Chicago for 19 years.  It was so cold, the OM-1 power winder, a cheap hair dresser's version of a motor drive, froze up.  It's also why there's no one in the background.
Posted by tintin at 07:58 8 comments: 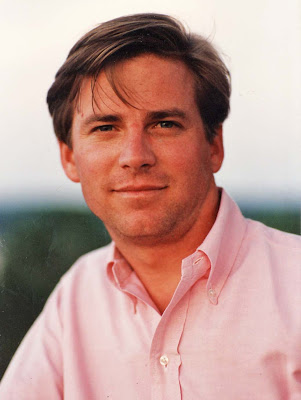 Brooks Brothers button down circa 1984. I remember that...


When I was in the Army, we used to collect flies in our beer cups and when you had 10 or 20, you'd drink 'em. This looks like a lot more fun. Thanks to Clay Tompkins for the heads up and who reminds me you can still be 12 after 50. Just remember to eat what you kill.
Posted by tintin at 07:23 3 comments:

Labels: Clay Tompkins, Out of the Box 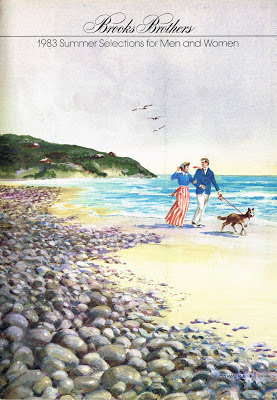 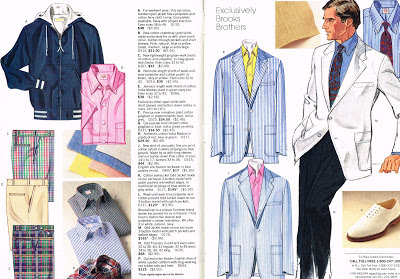 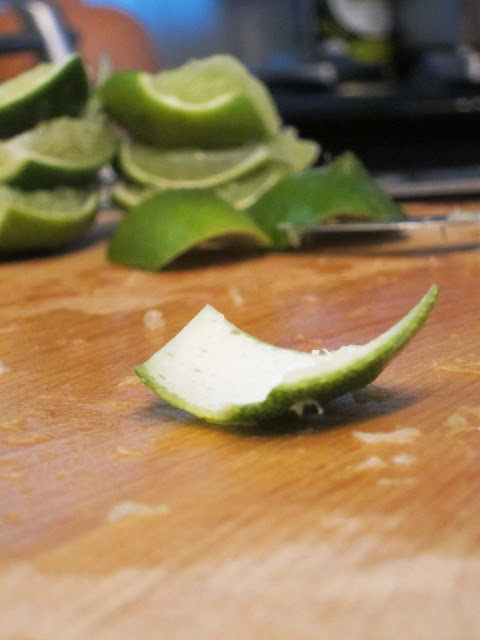 Years ago I swiped a G&T recipe from the NY Times which called for the muddling of lots of lime (5) skins, lots of gin (1 cup), a half liter of Tonic and handfuls (4) of ice.  Simple in the description... 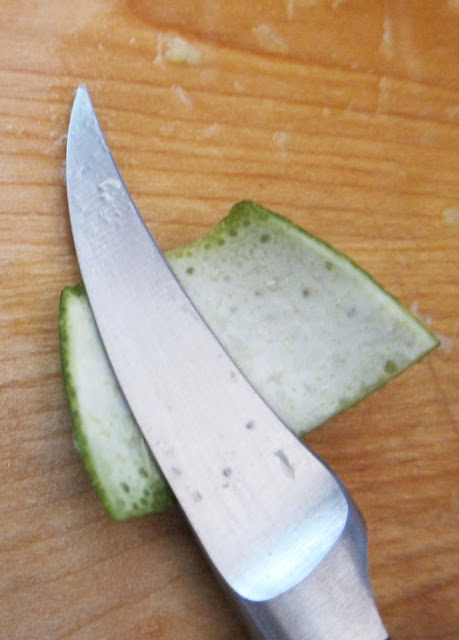 But cutting the pith outta lime is not easy.  I discovered the beak knife does a pretty good job.  It's still a messy proposition but the pay off... 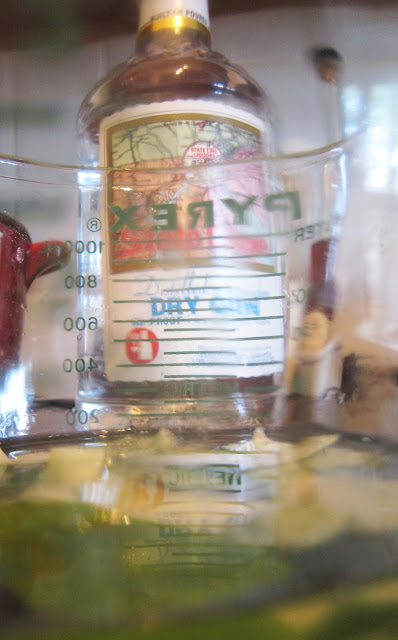 ....isn't that great.   Maybe it was the 1.75 liter of gin for $9 I was using.  State Line Liquor (Liquor? I don't even know her!) has a private label for gin and while the label is as cool as all get out -- the gin itself is nothing to write home about. 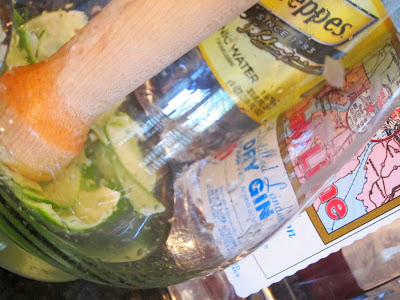 Still, this recession ain't over yet.  At least, not for me...So, nine buck gin it is.  Actually, this is the kind of gin you need for a Negroni --  The perfect cocktail for cheap gin but that's another story. 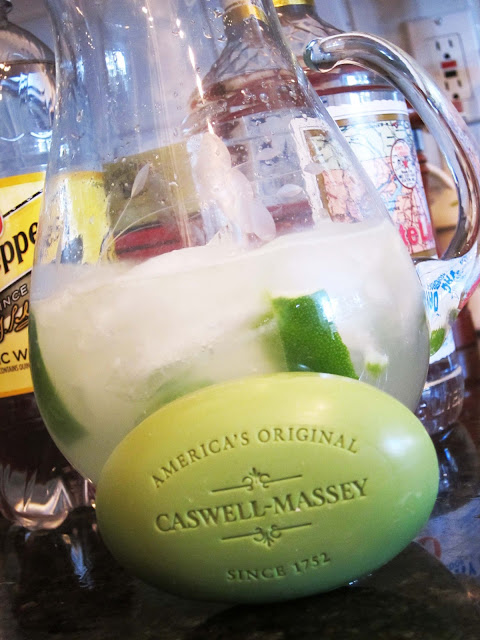 It's not the time of year for a big Cabernet and a hot tub.  Nope, that ain't gonna cut it.  But a pitcher of this muddled G&T with a good friend in the pool or better, in a cold shower or maybe just between some cool linen sheets.  While it's still day light and you smell of Caswell Massey Lime soap...That's a perfect G&T. 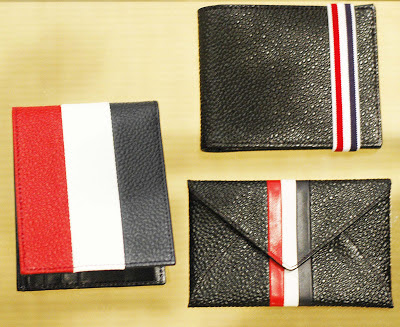 I love the more obscure facts about the Revolution...Did you know there were more than 13 colonies?  In North America  there was East and West Florida and North and South Novia Scotia,  Sam Adams was looking for a revolution to escape his debts. George Washington was an Anglophile and Ben Franklin may have been a spy for the British. Whether he was or not, many historians agree he would've come out of the war, equally as well, if the British had won.  But...you don't really wanna know any of that.

I may be getting too old, but I have an idea of what you want -- You wanna buy something...Preferably, something you don't need. Something that says something about you. You'd say it yourself but it's better 'things' do the talking for you. Me? I have six wallets and I'd sure like another one. These tasty beauties are at Brooks Brothers under the Black Fleece label. You're sure to get some attention whipping one of these bad boys open in Freemans Restaurant. They say Benedict Arnold turned coat because Congress screwed him over on his expense account but no one gives a toss about that. Happy Independence Day...Go buy something.
Posted by tintin at 06:03 5 comments:

On the Road to Character

PHIL
The question is, do you have any character at all? And if you want my honest opinion, Bob. You do not. For the simple reason...you don't regret anything yet.

BOB
You're saying I won't have any character unless I do something I regret?

PHIL
No, Bob.
I'm saying you've already done plenty of things to regret.
You just don't know what they are.
(a beat)
It's when you discover them.
When you see the folly of something you've done, and you wish
you had it to do over but you know you can't 'cause it's too late.
So, you pick that thing up and carry it with you to remind you that
life goes on... The world will spin without you...
You really don't matter in the end.
Then...you will attain character because honesty will reach out from inside
and tattoo itself all across your face.
Until that day - however - you can not expect to go beyond a certain point.
Posted by tintin at 20:27 2 comments:

Green Bay - A Road to Regret

Whenever anyone tells me they're getting divorced...I always say, "Is there any way you could stay together?"

A car from Amm's would pick me up for O'Hare.  After 13 years of marriage, it all was over except for, "What airline, what hotel, where do I send the divorce papers?" The car was on time and pulled onto the driveway I had blown snow off of for 11 years.  We said good bye, I turned to the door and quickly walked to the black town car.

Less than a mile later, at 176 and Green Bay Road, I realized my cell phone was in the living room.  I asked the driver to turn back.  When I walked into the house - I could hear her washing dishes and crying in the kitchen. At the sound of the door, she poked her head out of the kitchen, looked at me and smiled. I said, "I forgot my phone,"  picked it up and walked out to the black town car.  Today would've been our 25th anniversary.

I've always been envious of those who have no regrets.

Your Pictures Are Ready - 31 Years Later 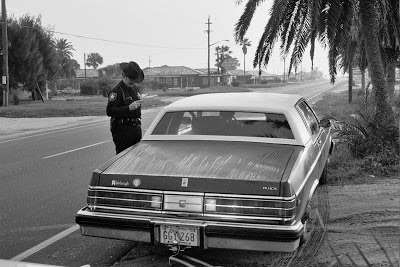 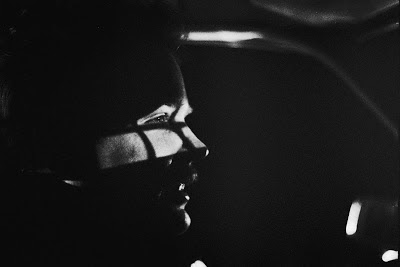 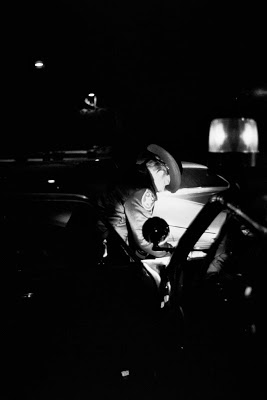 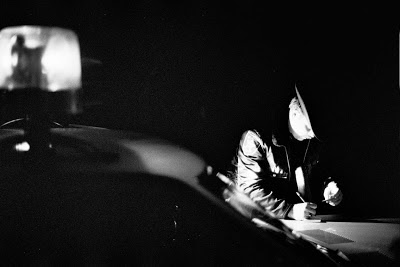 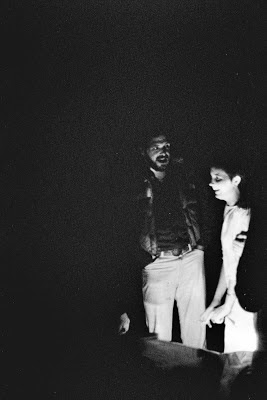 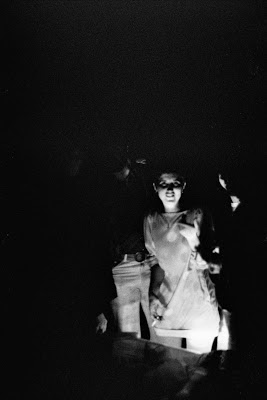 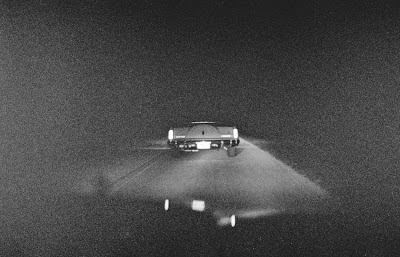 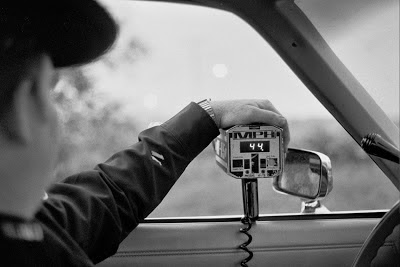 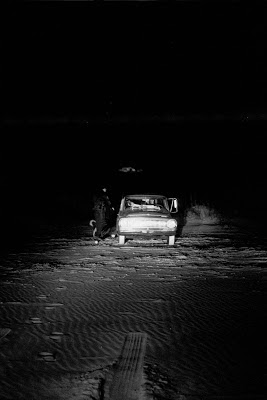 I had somehow bullshitted my way into doing an independent study for photography my sophomore year of college as mentioned earlier here.  It's also important to note that I received an 'F' from my instructor. An adjunct who I believed to be communist because she didn't shave her legs.  Among other things.

In all honesty, I would have given me an F.  The photos I turned in were abysmal and the captions were something out of  Boy's Life.  All in all it was a last minute rush job that would become my signature in college.

A couple of weeks ago, I found six rolls of 35mm film buried in a shoe box. Three of the rolls are Kodachrome and three B&W Plus-X.  I had the Plus-X developed and the results were picked up Friday.   Two of the rolls were from 1982.  One, yearbook photos of a college play and this roll. The independent study of a night on patrol with a deputy sheriff and good friend, Pinky.

Long story short, I enlisted, did four years, got out and after a Summer as a security guard at Marine Land, started college. By my second year, I knew I wanted to write and I wanted to be a photographer.  Photo-journalist seemed a natural, in the way naive kids appoint themselves to a profession as if the very saying of it makes it true...but that's another story.  One of my photography instructors, Christina Hope, liked what I shot and even bought a photo of mine for an advertisement she did for a local auto parts store.  She pushed me to do an independent study and cleared my way.  Look fucking out, W. Eugene Smith.

I had met Pinky earlier that year.  He was working in the county jail and I shot some photos of an inmate who shot his wife.  Pinky had transferred to what was called Road Deputy, obviously a promotion, and he agreed to take me on patrol on a Friday night.  It was mostly drunks and a woman I had forgotten until I saw these pictures.  She came back to me like a slap in the face.  Mini skirt, cigarette and completely outta her head...but her boyfriend was stone cold sober and he was driving.  Pinky let him go for making a rolling stop through a stop sign figuring the guy wanted to get her home as quickly as possible.

We ate ice cream to stay up through the midnight to eight shift. By early morning, Pinky set up a speed trap but while he nailed numerous drivers for speeding in a 30mph zone, he didn't give anyone a ticket. They either knew him or his parents who lived in a small house on the west side of A1A back when you didn't have to be rich to live on the beach in St John's County.

I crawled into my girl friend's bed around nine in the morning and after she woke up, I told her the stories of the drunks, the guy with DTs, the crazy mini skirt girl and eating ice cream out of a pint held between my legs to stay up. She looked at me, said she had no interest in cops and would prefer if I never went out on patrol with Pinky again.

31 years later I see photographs of that night and morning.  Never sure of exactly what date but sure of how it all felt.
Posted by tintin at 05:56 3 comments: