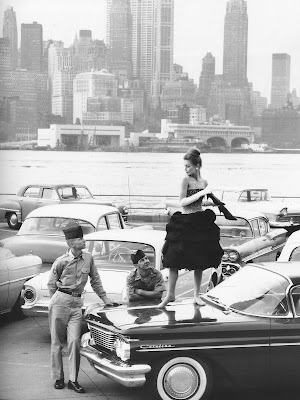 The ladies love a man in uniform. What a beautiful picture of the city too!

"Darlin', when I die, I wanna come back as that mirror finish..."

This was taken from a book of Puhlmann's photos and illustrations, 'A Fashion Legacy' 1955-1996

Puhlmann (b 1934) commuted between NY and Eupope and was on his way to a fashion shoot in Paris when he was killed in the TWA crash.

It's a wonderful book usually on sale at Rizzoli for under $10.

Sort of a strange shot...but I still like it, probably for the historical nature of it.

DB - Have you seen any of Puhlmann's stuff before? I know you'd love his early stuff. Reminds me a lot of what we were going crazy about when we were 17.