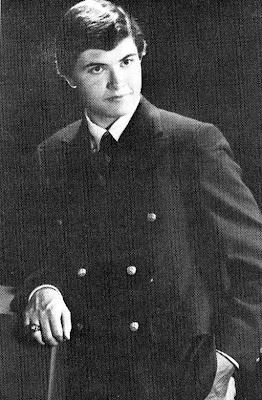 He's not nine but you get the idea... (from The Trad Library) 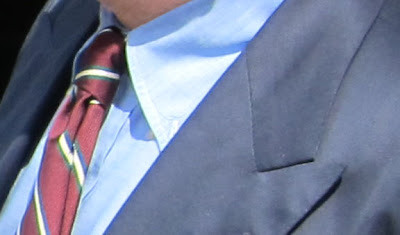 DB with unbuttoned button down 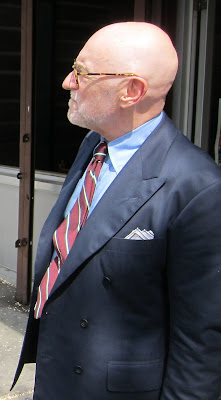 "It's over yonder -- by that Fry-toe Lay truck. " I looked 'over yonder' to see a Frito Lay truck in a shopping center parking lot somewhere in North Carolina. 'Frytoe Lay.' 'Over yonder.' Language I'm still unsure of but understand.

Beth Hyer gave me a small bag of Frito Lay chips in 4th grade at St Thomas More in Chapel Hill. She was stunning in her plaid jumper and crisply starched white shirt with Peter Pan collar. I wore a blue blazer, dark grey trousers, a white shirt and a navy clip on tie. There was one kid in my class who wore a double breasted blazer. I didn't like him. Not even a little.

It's hard to write about a double breasted blazer. Not because it's too damned hot to even think about it but, like a middle aged purchase of a Porsche Boxster, it comes with a whole lotta baggage. The rules are simple: Navy only. Peak lapel. Side vent. Six button. Never with a button down collar shirt. Good rules. Nothing is more vacuous than a notch lapel DB blazer -- unless it has a center vent and comes in maroon. One shudders at the thought.

A small detail overlooked by ready made retailers is the required button hole on each peak lapel. For some unknown reason, I'm guessing cost, ready made double breasted usually has only one button hole. This is as criminal as a notch lapel to the cognoscenti.

A simple fix is to have the retailer add a button hole to the other lapel. It's not easy and they'll try to talk to you out of it, but stand your ground or go someplace else. Chicago's Michigan Avenue Brooks Brothers did it for me and they did a good job. The head tailor also told me what a pain in the ass it was but he assured me he understood my desire for balance.

A friend lives in Los Angeles and he's mastered the not so balanced West Coast casual look. Sockless & Gucci-ed, open collared & waistcoated, he runs every day and looks 10 years younger than his age. He also has custom shirts made with double cuffs, button down collar and a monogram on the pocket. And while he likes to wear this shirt with a DB blazer, I blame this lapse in judgement on L.A. and not him.

There is an old rule about never wearing a button down collar with double breasted anything. Once aware of the rule, it's easy to see the clash between soaring peak lapels and a constricted collar anchored with buttons. It's just wrong. Spread collar is preferred even if it's open which the English like to do. But what about a unbuttoned-button down collar?

The highly evolved know they're breaking a rule so they leave the collar unbuttoned. This is language to those in the know that you know, you know, what's going on. The DB is complicated language.

Yanks prefer the blazer buttoned up to the Brits who prefer to wear it unbuttoned. Wearing it unbuttoned in the States or buttoned up in London leads to more language problems. It's another language I understand but am never sure of. This much I do know -- Never give a double breasted blazer to a nine year old.
Posted by tintin at 11:44

I believe it is pelled free-tow lay.
What if said DB jacket has maroon pinstripes?

I wore an old Harrods DB blazer to a meeting in London this morning (cleantech startup, so I was the most formally dressed). Brooks Brothers spread collar shirt, no tie... But I have no idea if I have a button hole on the right lapel. Why TF would I want one - matching gardenias? Symmetry is overrated, Traddy.

The no button down shirt with double breasted coat rule seems arbitrary. Fred Astaire often flaunted it, as can be seen in one of the opening scenes of The Bandwagon. He shows that, if anything, it softens the formality of the db jacket, the curve of the collar adding relief to the sharp angles of the lapels.

Could you comment on the fact that Mr. Boyer's blazer has horn buttons and not brass buttons, possibly implying that this is some sort of orphan jacket from a suit. While this looks perfectly fine to me, there are some in the Trad community who would get apoplectic over this.

Daily Crap- "Symmetry is overrated" I guess we'd all look better with one ear. The opposing button hole is not done on a SB peak. Only a DB peak for balance and tradition. Just 'cause it's important to me doesn't mean you have to.

Mac- Are you wrong? Yes. A man's jacket buttons L over R. I understand it comes from the side your sword was carried on. Is that me. No.

Yetti- I tend to avoid dressing like celebrities. Past and certainly present. They can do things your average mortal can't.

Anon- Yes, Bruce was wearing a horn button blazer with grey trousers and like a celebrity he was able to pull it off. I would not recommend this unless you have Boyer's gravitas and style. I sure as heck don't.

I had never considered the button-down collar/double-breasted rule. While I don't do it, I see it as no sin.

No button down with DB. News to my old ears. Is that a NYC thing.
I'll consider it. Or not.

No one is symmetrical, you silly old fellow.

You went to St. Thomas More in Chapel Hill? My Daughter's volleyball team played them and totally got over as I recall...


I saw this and thought of this thread.

I meant how you says the Brits prefer the jackets open.