"If It's Not Harris Tweed It's CRAP!" 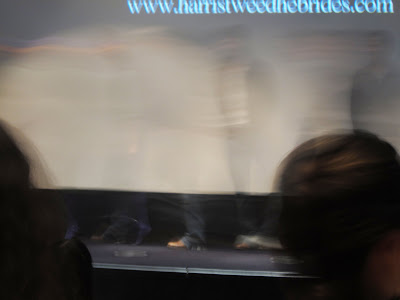 We all hope it's not disappearing 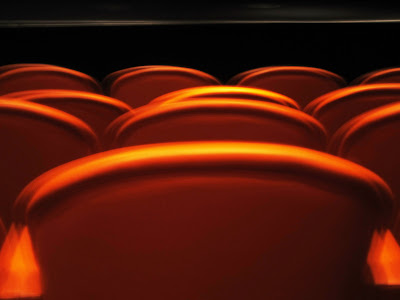 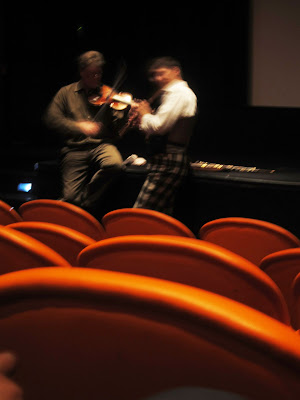 Lots of music and 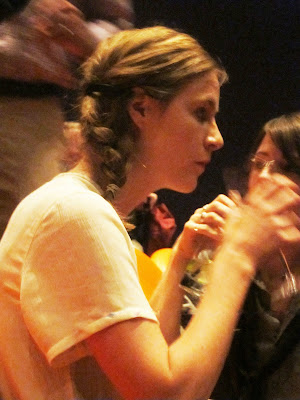 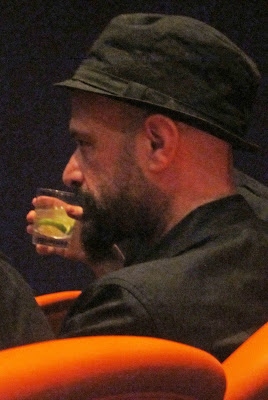 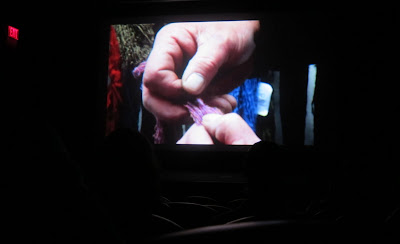 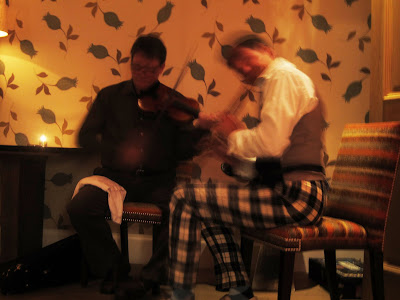 I'll say this for the Scots -- They throw one helluva party. Two open bars, sliders, a Macallan tasting and ... I'm not sure why we were there? That's right. Tweed. And not just any tweed...Harris Tweed. 'If it's not HARRIS tweed it's CRAP!' pretty much sums up the night.

Over the years I've learned three things about drinking with the Scots. 1- Never try to out drink them. 2- Never bet them money they can't do something in a bar. 3- Never try to understand what they're saying. Best just to smile and nod and let them buy the next round. In short, they're my kinda people.

Harris Tweed Hebrides did insist we sit through a short film on the history and traditions of tweed. And while tweed hasn't exactly been on my mind these last few days of 100 plus degree weather - - I can't help but wonder how a country has managed to maintain a home weaving culture in 2011. It hasn't been easy.

The story goes that in 1840, when famine hit the sparsely populated Outer Hebrides of western Scotland, Lady Dunmore bundled up the locals hand made cloth and took it to the mainland to sell. Today, Harris Tweed must be made of pure Scottish wool, dyed, spun, handwoven and finished in the Outer Hebrides or it cannot be stamped with the mark of the orb, the fabric trademark since 1909.

Demand for Harris Tweed has dropped from the good ol' days of the mid '60s. But efforts to climb back are being made. Not only through hip brands, whose representatives were in full force last night, but also through bold colors like bright pink and lavender as well as a softer hand. Not exactly daddy's plank of black and white tweed from 1965 or my plank of J. Press Harris Tweed from 1995.

Times change. Men seem happy to wear strands of dental floss on their wrist, studs in their nose and nativity scenes tattooed on their leg. But every man needs at least one Harris Tweed jacket. Here are a few to give you an idea of how they can be worn and what men used to look like. Professors (click on image to enlarge) courtesy of 'M' The Civilized Man. 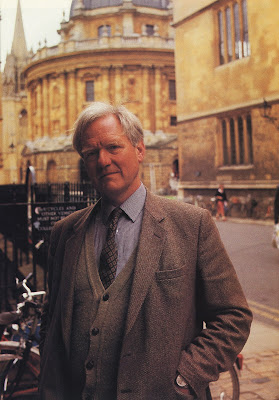 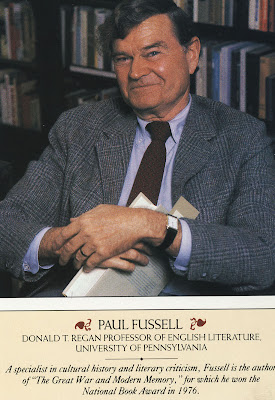 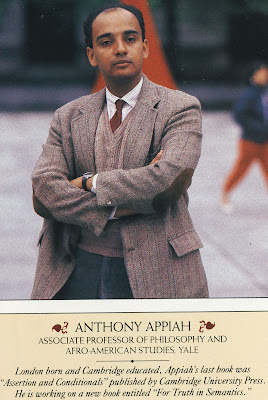 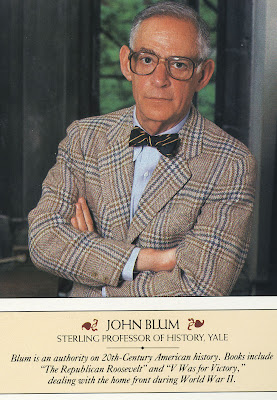 I LOVE tweed, and well, you can guess my fate when I ended up on the Hebrides during a backpacking trip this summer. If I were a man my wallet would have been much worse off...

There is an excellent little tweed shop right in the harbor of Tarbert, Harris. Since most of the tweed is nowadays made on Lewis, the major retailer, Lewis Loom Centre, is located in Stornoway. The owner of the shop is a most pleasant man who caters everyone with delight, whether you are a top fashion designer, British royalty, or just a tourist. He's got a book full of tweed orders from the past 100 years so if you are a purist and want to know the colors and patterns of say 1930-50s, he's your man.

Thanks for an excellent blog - I've been lurking around for quite some time although this comment is my first. :c)

Where was this event? How does a guy from Brooklyn get invited to events like this? ;-)

Macallan 18 is sublime, but I've been introduced to some other interesting and, unexpectedly, good Scotches.

I've yet to get a Harris Tweed. It's on my list. I have a good Donegal Tweed jacket, and it's very "nubbly", but I'd like something with an interesting pattern.

I recently heard about the Tweed bike ride in Brooklyn in November, and I hope to either attend or, at least watch.

I think the very best thing about good tweed is its longevity. The stuff just does not wear out.
My introduction to sartorial considerations began with the arrival of bags filled with child-sized tweed jackets passed along from older cousins when I was about 4. In the pile of stuff, there was even a navy Burberry trench I sometimes wore to kindergarten but usually just wore around the house to play "spy."
Quickly outgrown, my next batch Harris arrived with the passing of my grand-dad in my early teens. I've outgrown them too, but still have them, dearly hoping to pass them on as well. Remarkable colourists those weavers. My fav is composed of lime green, steel blue, ivory and maroon.

I suspect the fashion crimes of the 70's and 80's might have nearly killed tweed. Thrift shops usually have piles of badly cut, fused, poorly trimmed jackets in dishwater dull colours. It surprises me that the cloth at least is not harvested and recycled into something else.

Please excuse me in advance for this self-mention, but I have a Harris Tweed jacket. It was my paternal grandmother's. http://amidprivilege.com/?p=953. That family fancies itself Scottish, you see, even 400 years past.

I like your description of this affair. Do you think if I send a photo of myself wearing said jacket I too can be invited to groovy events. If I promise not to say "groovy?" I hold my liquor pretty well for an old lady. Thank you for your consideration.

I love my bomb-proof Harris tweeds, with and without patches. Pendleton used to make a nice stateside tweed.
Cask strength Mac, while not age identified, is my house scotch.
I'm glad you had fun with my peeps!

Even though it's been scorching in the day time, the nights in the country have been chilly and humid. I showed up to GF's father's house in the country with wine and Brie and baguettes. Since his separation from his wife, he uses the house as storage for clothes he no longer uses and no longer fit.

We sat outside for drinks and I was wearing blue linen slacks and white shirt, and getting cold from the humidity. GF goes inside and grabs me a coat from the closet. It felt better than a sweater and I couldn't believe the fit. I look at the inside of the jacket and Holy $h*t! Harris Tweed late 70's... GF gets three points!

I stay away from the hard stuff for the most part and most Harris Tweed is too itchy for my delicate skin.

-What would Willie the Groundskeeper say?

You need to watch LPC closely at events like this!

An essential part of a winter uniform. Nice post.

All too sadly true, and something that depresses me nearly every day. Wear tweed. It'll make you look like a grown-up. Even if you're not. Note to men: Stop dressing like your son, you look stupid. Oh, and while your at it, stop going to see his favorite bands, too. It's just sad.

Henceforth i shall wear frock coats and haunt the vaudville circuit.

OK, going out on a limb here, maybe I'm missing it, maybe I'm looking too much at hairlines, but please... please, tell me I am not supposed to look like these guys.
Now I will admit I both need and want a tweed jacket but none of these examples are what I'm aspiring too...except possibly in academic accomplishment.
Sigh

Dang! I should have known not to fib. ADG, you call me out and I acknowledge it. However, my disruptive behavior is saved for perpetrators of visible injustice, so, there's that.

Trailer Trad asked what Groundskeeper Willie would say. He would say "Damn Scots! They ruined Scotland!"

Anna- Thank you for the comment and an opportunity to see your blog. Except for the cat pictures I like it all.

Theoden- No idea how I get invited to these things. I rarely go. I'm far too old for this kinda shit. But I like Scots so this one made sense. Go buy yourself a Harris Tweed but I wouldn't go to that Tweed Bike Ride for all the Filson in Brooklyn. That's just me. You go right ahead.

Oyster- I hear ya. Suppose that's a problem with lagging sales -- the brick-shit-house nature of tweed.

LPC- This is the Tweed Tree House, LPC. No girls allowed. If you ever let me know you're in NYC I'm happy to set one of these up for you. Don't worry - I wouldn't come with you. You can bring Reggie and Dusty.

Scale Worm - I'm partial to Laphroaig myself but the Mac was free.

CG- Where in the foock have you been. Nice story. Nicer GF.

Trailer Trad- No tweed boxers in your future?

ADG- I'm setting it up so you can.

Richard M. - Antonio at 13th & Wolfe has a great post on Digby. sounds like he was a wonderful man. Free of pretense and bullshit.

Anon- I wonder of there's an 8 oz tweed out there?

DB- Hey, watch it. I had some 22 year old give me unholy grief when I told her I liked the band Garbage. "I hate it when old people (I was 40) like our music." "No shit, sweetie. The leader of the band is older than I am."

Bro- The world is more than ss white shirts and a navy tie.

LPC- I'm warning you about taking over my comments section with Dust Bin. I swear, if Reggie Darling and Boy come over here and start with saucers and china patterns, I'm shutting y'all down.

My Harris Tweed, courtesy of Lands End of all places, is a fall and winter stalwart, perfect foil to a J Press buttondown and bow tie, ideally something with Labs or Springers, maybe pheasants. 98 tomorrow. Is it fall yet?

ps, thanks for the tip on chino cuffs.

Tintin - Peace offering. How about martinis, all together, some atmospheric fall night?