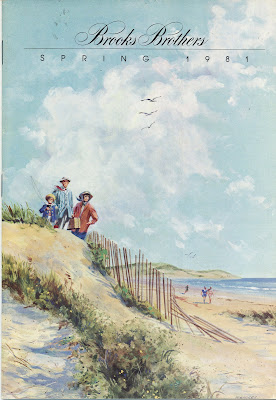 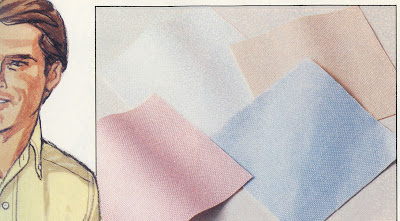 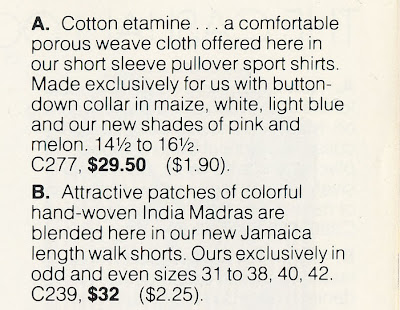 
I was talking to Tom Davis (MTM Shirts) at Brooks Brothers last week. We covered a lot of ground but everything stopped when he brought up etamine. An ultra light voile-like fabric used by Brooks Brothers for shirting years ago. I did some digging around and didn't find much. I'm still digging.

A weekend wander through textile and fashion books reveal the letter 'E' has the fewest entries and etamine ain't one of 'em. The internet will tell you it's a light porous cotton in an open mesh, susceptible to snagging, with a slight gloss finish. Dig a little deeper into the etymology and, by 1936, etamine is pretty much extinct.

Hardly a surprise Brooks Brothers catalogs from the late '70s and early '80s show the shirt Tom remembered. Short sleeve pullover in basic blue, yellow and white with pink and melon added in 1981. Great colors, popular pullover style and a fabric that appears to breathe better than linen. Cheaper too according to a web site that sells etamine for three bucks a meter (beware minimum order).

Who knows if etamine today is the same as it was in 1981? That's a question not a statement. If you know, please let me know, since the hunt is on. Summers don't look like they're gonna get any cooler.
Posted by tintin at 08:33

I always referred to Etamine as an air weave also called a panama.
some versions are porous and see-through Hair from your chest will poke out of the holes.

a few european mills produce this sort of fabric. but like voile, it has fallen out of fashion with the buying public.

Carl- Thanks. I don't have any hair on my chest. Well, maybe three.

This cloth has a relatively long history. From the OED, the word derives from the French, dates back to 1701 in English usage, and always was associated with a loosely woven fabric. It is also spelled "estamin":

"An open woollen fabric, used for making sieves, etc.... In 18th c. also applied to some silk fabric, presumably of similar texture. Also spelt estamene, as the name of a woollen cloth for dresses."

Dad had the etamine shirt in blue and white and I got em both as hand-me-downs circa 1989.

Ended up wearing them to fish in, which means they were inevitably stained to hell and back with booze, dip, blood, etc. Sweet mercy Herself kept them around til a pinhole tear in both turned them into redneck standards for the flagpole.

I also remember that BB catalog cover. Seems like it set on the mag pile top in dad's can for a while.

it's sounds the fabric that is used to make the gautemalen shirts i see at the famer's markets. I have one-very airy.

Also sold in windowpane checks and was a popular item at the Palm Beach Brooks Brothers. Will post ads on my blog tomorrow.

Don't know about the shirt cloth you're looking for but I wouldn't care for the style of the shirt shown in the illustration. The placket is just way too deep, about twice the length for my taste. But perhaps it's as deep as originally conceived for the earliest of polos.

As to summer fabrics, I can't overstate the benefit of my go-to standby: pique (mesh) weave polos.

The word mesh worries me. Mesh should belong to the realm of under-garments. (Or to the heady 1980s and I am forced to admit to wearing a fair share of mesh due to photographic evidence.)

I'm sticking with linen in this weather.

Alice: I agree. Mesh seems rather...seamy. Like the sleeveless sort of athletic mesh shirts some guys feel free to wear to malls and practically everywhere else. That said, Land's End calls their open weave cotton polos "mesh" when, in actuality, the more appropriate term is "pique."

Light and most importantly, very breathable, with the weave pattern almost invisible from several feet away, shirts with cotton pique fabric vent a lot of body heat. And thankfully, are perfectly acceptable mostly everywhere. Mostly. Don't wear pique in winter.