Cowboy Steak "I Wouldn't Have It Any Other Way" 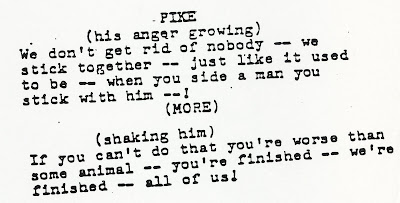 From The Wild Bunch 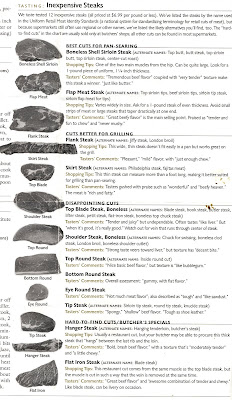 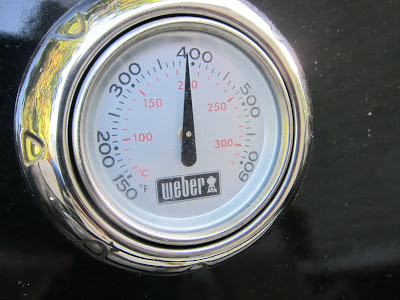 About the right temp 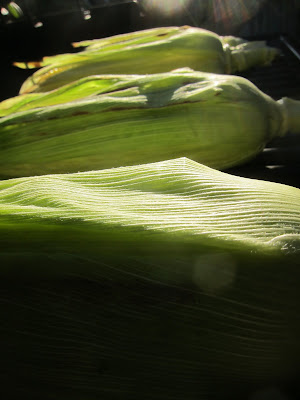 Throw the corn on first 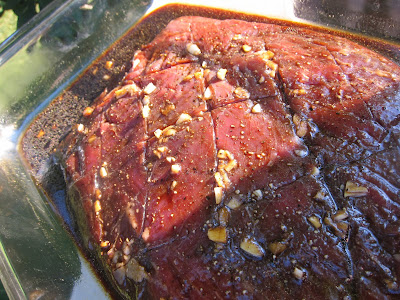 Let the marinated whatever get to room temp 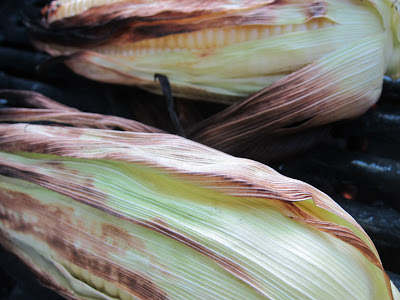 After corn grills for 40 minutes 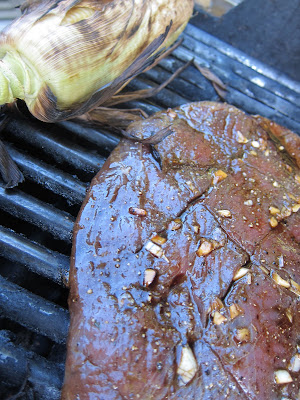 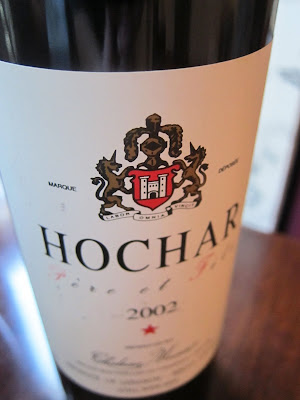 When I lived out west as a kid I remember flank steak was sometimes called 'cowboy steak.' I liked cowboy stuff a lot but I fell into that late '60s early '70s cowboy antihero movie phase of which Sam Peckinpah's Wild Bunch pretty much wrote the book.

My dad took me to see it when I was 12. It's probably my favorite movie and I'm not sure why. There's something about going down a road and you know it's wrong. In every way. But you go down it anyway. I guess it's about the only 'noir' western I've ever seen.

I was lucky enough to live in Texas, Colorado and Oklahoma. Places where you could find a cowboy steak. There's a place here in NYC that offers cowboy steak but I don't have the cojones to try it. Make my own instead. Pretty simple. Pretty cheap.

The cheaper the cut the better. Pick anything up there in that old Cook's Kitchen illustration and you can't go wrong. Why? Because your gonna marinade this for at least eight hours. I reckon you can get by with four but not any less. I use a half a cup of Tamari sauce, about 3 tablespoons of toasted sesame oil and a half tablespoon of wasabi power.

This is key. I used to chop up a clove or two of garlic and mix it with the liquid. I'd lose all the garlic when I turned the steak over on the grill. Instead, stick pieces of the garlic into the scored sections. The garlic usually burns and gives you that fantastic burnt taste. Throw some Summer corn on. Peel back the stalk and take the silk out. Fold the stalk back up and soak it in water for four hours.

The corn's gonna take most of the time on the grill. Especially with weak Webers. After the corn's been on for 40 minutes I toss the cowboy steak on. It's impossible to give a time since even my grill seems different each time I cook. Instead, I push down on the steak. Just about right reminds me of how my ass felt when I was 25.

Take the steak off and let it sit for four minutes. A cold beer or a Rose would be nice but I found this red from Lebanon that I've been in search of for a long time. The 2002 Chateau Musar Hochar is soft as Jello pudding. More Rhone than Cab and a big hit at $25.

Someone asked me who I would have dinner with - dead or alive. I'd love to sit down with Sam Peckinpah, William Holden, Warren Oates and Ben Johnson somewhere down in Mexico. Watch the sun set and talk about washers - women - what you do when you side with a man and what's it like to walk down that road.

Labels: Food and Wine, The Trad Cook, The Wild Bunch

I would have never guessed you tender-foots in NYC would have the sack to grill up a cowboy steak (made from real cowboys!).

I've always been partial to the hanger/skirt steak grilled and served bloody. No marinade, just some grapeseed oil and copious amounts of salt and pepper.

I hope you're using charcoil and/or wood and not some stainless steal gas grill from Williams-Sonoma.

An interesting party but don't get stuck with THAT bar tab!
You left out Borgnine, 93 years young and goin' strong.
And for the Ivy brigade, Robert Ryan was the heavyweight champ at Dartmouth all four years he took college.

Thought you were a pan-seared apostle... Good to see you with the kettle grill white man.

Never marinated a steak per se. I did submerge filets in herb infused olive oil for 24hrs once. Couldn't tell to be honest.

Love Peckinpah. All of his stuff. Even that awful semi-truck one with Kristofferson.

Where did find that wine? I've been looking for it for a while as well.

Matthew- Total Wines. Haven't found it in NYC yet.

JW - I like skirt as well. Especially for tacos. Just a corn tortilla (hand made here in NYC), skirt steak, onion and cilantro w/ a squeeze of lime. Nothing else. And that is a crappy gas grill.

Looney- There's a great bio of Sam and the Bunch called, "If They Move, Kill 'Em" and in it many who worked on the film, tell stories of a bar that Sam had a studio tab with. Anyone on the picture could come in and drink free with Sam. I can't remember but the total is mentioned in the book. Staggering amount.

GSV - I saw Cross of Iron when I was in the Army. Loved it then but haven't seen it since. It amazed me how many people at a party never heard of Warren Oates. Straw Dogs still creeps me out but there is something about Bring Me the Head Of Alfredo Garcia that I just love. Maybe it's 'cause Oates confessed he was playing Sam.

Matthew- Michael Broadbent and his son taste the Musar Hochar in this video and go crazy over it. It appears to be a real steal for the $ -- if you can find it.

tintin - just back from four days in the rio grande valley. 'bout as close as one would want to get to Mexico these days, unfortunately. all traffic one-way. lots of skirt steaks though, tough and thin and served up on tortillas made the way they should be made. all you need is a little lime and salt.

hopefully you'll be able to get that dinner south of the border before too long.

My 14 year old daughter, who is a very picky eater and has always been a "steak and potatoes girl" said, after eating the skirt steak at Le Veau d'Or in NYC, "This is the best steak I have had in my life." Perhaps their chef is a French cowboy?? DMW