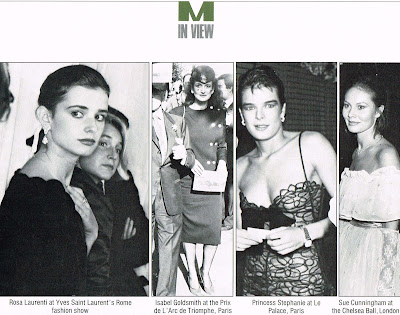 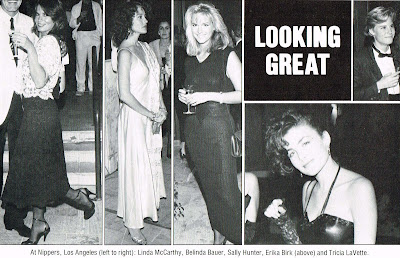 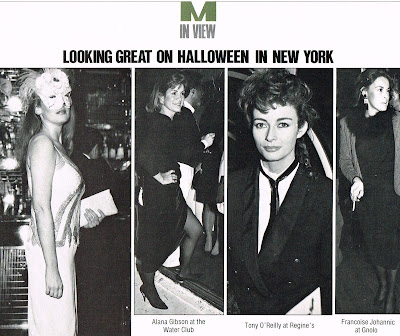 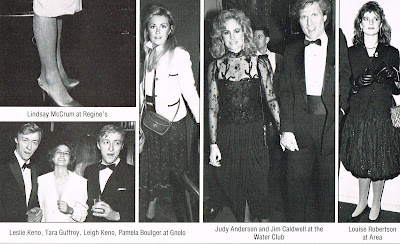 I was showing a friend of mine from London the party pictures in Tattler magazine on a north bound Metra train from Chicago one afternoon. We were on the 5:07 express drinking Old Styles and I was pointing to a picture of BBC news presenter, Alice Beer, who was showing major cleavage while holding a drink and a cigarette.

Mutley looked at me and said, "You do know that none of those people would ever talk to you?" Same can be said for the people in M Magazine's Looking Great column. A cute red head at the Surf Club told me, "Sweetie, I did not move to Manhattan to meet a park ranger."

M Magazine was my fantasy back then. Better than Playboy or Penthouse because there was a chance, albeit small, that you might actually run into one of the women in Looking Great. That "chance" brought the fantasy a little bit closer. If only I could've afforded cashmere socks.
Posted by tintin at 10:34

I had a classmate who's pic appeared in Looking Great, back in 1987 or '88. He was at some horsey event, I think the Belmont Stakes, and he did indeed look great; khaki suit, tortoise shell sunglasses, white bucks jauntily resting on the seat in front of him in the stands. It was a black and white, as they all were, but I guessed he was wearing a pink BB OCBD. Drink in hand, smirk-sneering at the photographer as if to say, "Yeah, you BETTER take that picture." His no-doubt gorgeous date cropped out because he was the more attractive subject.

But from seeing him in action in and out of class, he was a vapid, obnoxious fellow of the sort that was typically played by James Spader in the Eighties.

And yet I watched all those Spader movies. And enjoyed them, too.

Your reply to Miss Snotty-Crotch at Surf Club should have gone something like this: " Honey, since I have moved to Manhattan I have met my share of snotty, promiscuous, mercenary wenches...but you are a gold medalist..."...then drop your smoke in her G&T and exit stage right....
Now, about that Princess Steph...ouch...

Ben- Money makes up for a lotta shortfalls with women. Of course, it does with men as well. I've sent seven proposals to Oprah.

Main Line- One of my shortcomings is taking way too long to figure people out. I thought I still had a chance. Called her...Never mind. It's too depressing.

"Please, hold me while I tan­go
So, my dear, it's been a blast
You were not my first
You won't be my last
Ciao, I got to mam­bo
Noth­ing lasts for­ev­er, dar­ling
But it's not the end of the world
When I was fired by Paramount
They was still MGM"

Ah, Princess Stephanie. A princess with bold short hair (and even bolder shoulder pads). She was fabulous.

Dense. I have it.