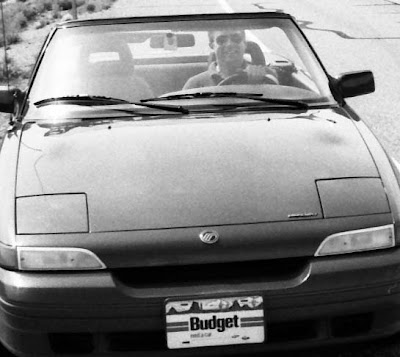 A Warning: I never met Michael J. Fox or Woody Harrelson. I don't want you to get to the end of this and feel cheated.

Where ever it was, I had business in Los Angeles. Not an entirely bad thing in January. I rented a Mercury Capri convertible and drove to my hotel in Marina Del Rey. Crawling along an LA freeway, a woman in a red Mercedes convertible smiled and asked me for the time. Checking my wrist on the door frame -- I gave it to her. She smiled, "Nice car." "Thanks," I said. "It's a rental." Her smile grew larger under her sunglasses and I felt my face redden as my lane pulled away from hers.

I was invited to the Magic Castle for a friend of a friend's 30th birthday party. I picked up John at his girlfriend's apartment. She was a publicist who was critical of my earlier attempt at providing PR for writers. My company name was Wild Bunch Public Relations. She asked me If I was Mr. Wild or Mr. Bunch.

She explained how she worked. Using a celebrity client to leverage coverage for an unknown client. That, and she didn't think anyone wanted to read about writers in People Magazine. She asked if we'd like to join Michael J Fox and Woody Harrelson for drinks after the birthday party. I thought that would be fun. I would tell Fox, a Canadian Army Brat, about my exploits with the Canadian Airborne ensuring we would be best of pals forever.

On the way to the Magic Castle, I told John about the woman in the Mercedes. He thought she was a hooker. John had lived in LA for years and he didn't think a non professional would pick up a guy in a Mercury Capri. I thought he was probably right while I thought to myself how negotiations for this sort of thing are handled on a highway.

We arrived at the Magic Castle and I was seated next to a woman who was at least six feet tall. Maybe taller. Her face was square with a strong jaw and she bore more than a passing resemblance to Elizabeth McGovern. I introduced myself. She didn't smile, mumbled her name and introduced me to her boyfriend and trainer, Thor. He was taller than she was and told me my Beefeater martini would kill me while vodka was the way to go.

She said nothing, besides a couple whispers to Thor during dinner. I watched her hands. Her fingers were long, her nails polished, her hands beautiful. My fetish was interrupted when someone across the table asked where I lived in Chicago. I told them Lincoln Park and she turned and stared at me. I saw anger in her eyes but all perceptions of crazy were dashed when she almost screamed, "I'm from Elmhurst!"

For the rest of the night we were glued to each others stories. During two hours of magic shows she told me her life as a failed actress who became a real estate agent. Too many relationships where she was 'left by the the curb.' People who cared more about what you drove than the house you lived in. Seven years without Chicago -- Without people who didn't care what you did, but only wanted to know if you were gonna buy the next Old Style. Seven years without the Cubs, the Lincoln Park Zoo or a gratefulness for Spring... a gratefulness for anything.

John walked over and said Michael and Woody were waiting for us at a bar in West Hollywood. She seemed to know I was going. I looked up at John, "Fuck those guys. I'm not going anywhere." He looked at her and smiled. "I understand." he said.

We stood outside and said goodbye while a valet pulled up in my rental. We hugged and I got in the car. She leaned over the passenger door and said, "You know, there's no place I'd rather be than in this car right now."

"Excuse me." John said. She moved aside and he got in the car. I looked at her in the rear view mirror as we drove away. John laughed, "I probably just saved your marriage." "She didn't want me," I said. "She just wants to go home."
Posted by tintin at 11:06

I'm thinking him saving your marriage had more to do with what you wanted and not so much what she wanted.
I just like good stories so now I've been saved.

This is fucking epic. Great story.

Happy to read this story on a dreary NYC day.

I hope she made it home.

Beautiful. Haunting. The warmest city in the country is actually the coldest. Sadly, she found out the hard way. It's what LA is all about. And it's why that PR woman is successful. She cracked the code.

Great punchline and subtle to boot.

No need for the warning. Never feel cheated by one of your posts.

Nice stuff. You're just a natural, Tintin. More stories! I'm not getting the whole hip-hop for white folks stuff. I suppose there's something ironic about that. The photographs are very scary.

Great story for today. Glad you didn't take her home.

That says it all.

Just a great story. One of your best.