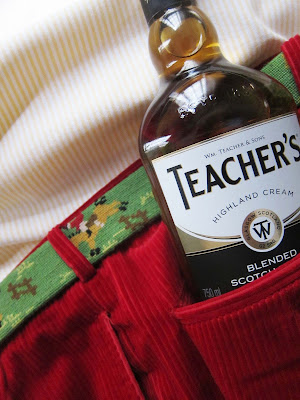 There's been talk about Teacher's Highland Cream -- That it's losing its stuff. An economical blend, better than most Johnny Walking's, it's rich, creamy and very smooth. At $17 a bottle, you can mix anything with it and sip away without any guilt of screwing up good hooch -- although I'd stay away from milk.

What has lost its stuff is that belt. J. McLaughlin decided to discontinue their luxe needlepoint line. I assume it's because of the much cheaper (and crappier) competition. The McLaughlin needlepoint, I own three, was the best damned needlepoint around...unless it was made by a loved one.

Teacher's Highland Cream is what it was. Nowhere near top shelf but huge value. Quaffable with soda, water or (God forbid) ginger ale, it can also do double duty as a single malt impersonator with a piddle of water for bloom. The blend is 45% malt. Mostly Ardmore. Add water and an oil slick appears looking like a one over fifty thousand map with mountains and rivers churning into each other. It's a beautiful thing to see. Especially in front of a fire.

I love this belt. Understated? No. Bright green rarely is, but it reminds me of the Teacher's aftertaste. A black label picks up the horse tail and hooves while the white of the breeches and saddle belt kick up the contrast. Pink trousers would be an easy enough pairing -- like soda with Scotch, but red cords bring it individuality without riding too far off the reservation. 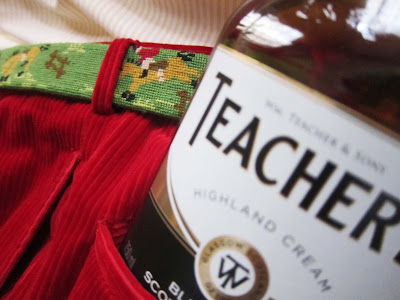 The bottle is not round like these Esquire ads from the early '60s. Instead, the glass is flattened, much like a pancake, which easily fits into a back pocket... should the spirit move you. 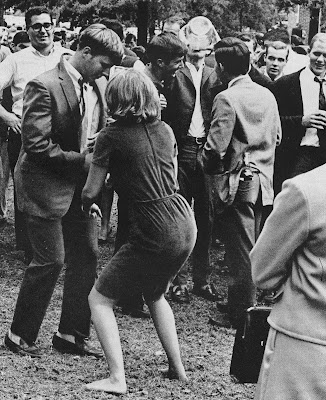 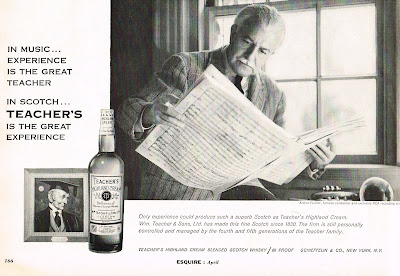 Winter is the home of Scotch. Wood burns in a fireplace and you can taste it in a glass of Teachers. It's a crazy steal for what it is. And while bright green is not always associated with Winter, the J Mac belt speaks more to how it was. I found mine on sale for $35. I'm not saying you will -- I'm just trying to teach you something...stay away from milk and the Chocolate Choo-Choo.
Posted by tintin at 08:19

I'm going to get some Teachers today since the weather is a nippy 68. AND, I have my first ever needlepoint belt on its way.

Tin:
Here in Phila the Hawk is out... Scotch will be a lovely addition this evening. Love those old esquire adds. By the way, I keep going back to M magazine images you posted last week. Great stuff. Robert Bryan nails it. Apparently so does Teacher's.

I like the shirt but you probably had it made or something.

I just had to know; the chocolate choo choo does exist.

As a teacher myself (public high school, 15years) I thank you
(is that Faulkner in that last ad? as an english and drama guy, I should know.. i guessafter a few sniffs he could be.) long live the BELT
my current warm up is Boddingtons pub ale in the tall can

Har Har Har... of course He does not forbid.

M Lane- Geez, break out a sweater why doncha.

Matthew- Bryan didn't know he was that good until he saw the post.

gent mac: 2 oz chocolate ice cream, 1 oz Kahlua, 1 oz light rum, 2 oz milk. Blend at high speed for 10 secs. Top with 70% dark chocolate shavings. Make this at home. If you order this in a bar you risk having someone beat you up and steal your Dutch bicycle to boot.

Zambo- Not a fan of the Boston Pops?

Bro- How do you know?

If you have a taste for a "Scotch Sour"..this is the type of Bottle to reach for. In 78 and 79 I was working after school at a gas station..owned by a Scotsman named Laird Allen. He would make a Scotch Sour every evening upon his return home...and used Teachers...

greatzamboni - the gent in the last picture is Arthur Fiedler

Love the stuff. Hard to find even in Chicago - I know of only one sketchy liquor store that has it.

One of the few remaining blends sold at higher than 80 proof. And to my taste it does make a difference.

I got some. Love it. Great tip. AND, my belt has also arrived. A spring/summer number all ready for warmer weather.