On A Road: Beatties Ford 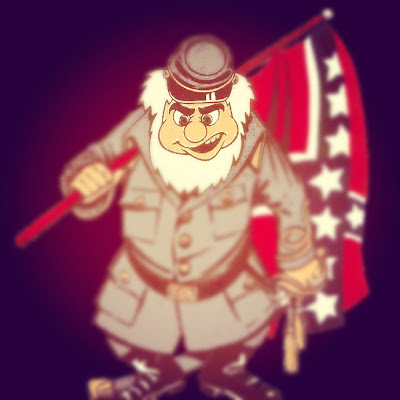 In 1968, we lived in a small southern town near a large lake north of a big city. The state looked like a fireman with Virginia as the helmet. Despite its appearance, I was sent to the principal when a classmate told my teacher I said hell at lunch. I had just seen John Wayne in 'Hellfighters' and knew what I wanted to be when I grew up. A rich fireman.

The south was a strange place in 1968. Very Christian but not very accepting. My classmates told me John Lennon would go to Hell for saying the Beatles were more popular than Christ. I couldn't say Hellfighters but there was nothing wrong with turning your nose up at a "Nigger Toe" nut or saying someone was 'going to Hell.' Especially John Lennon.

We watched news film of white lanky policemen with weak chins and angry German Shepherds attack protesters in the streets while Walter Cronkite seemed embarrassed to be in the same room with the footage. You didn't have to be Walter to know that something was crazy wrong. What no one knew was how much worse it was going to get.

Ignorance was carried like battlefield flags to the infield of NASCAR tracks. Restaurants proudly proclaimed, "We Reserve The Right To Refuse Service" while a Disney-like cartoon of a short fat Confederate general, grumbling, "Forget, Hell" spoke to something far darker.

There was a lot of ugliness despite plain front khaki trousers and button down oxfords. Made in the USA labels hid Mill Towns 10 miles from my home and and a hundred years from 1968. George Wallace bumper stickers were as thick as pine trees and friendships dissolved when I wore a HHH pin to school. "Forget, Hell" will always mean something different to me.
Posted by tintin at 12:29

Tintin, I was living in Northern Virginia in 1968, and while it was miles away from where you were, it was still very much the South. When I graduated high school 1969, our class wanted to hold a counter graduation (spirit of the times and all). We tried to get a park permit in Fairfax County, but were denied because African Americans were not allowed in county parks. I am still shocked to say that. The South will always be another country unto itself.

I am embarrassed I have to ask this, but what is an HH pin?

ann- A lot of the old south simply died. Yankees move in. Times change. In a good way. Some places, not so much. Moving around a lot was a two sided sword. I was observant and fascinated by new places, dress, culture, music, food. I also didn't stay long. 12 or 18 months.

But my mother's from the south and I have a connection to her home. I don't wanna live there and open up a retread shop but the south will always be a part of me and I'll also never belong.

Makaga- Shit. I am old. Hubert Humphrey. Ran for president in 1968.

Makaga- It should be 'HHH' and you can see one here:

Sorry about my naivete, Tintin, but I do thank you for educating me about the pin and what your experience was like in school during those times.

I find it interesting that times were like that "back then" but when most hear about racism today they get all touchy as if there is no such thing as a racist now. where did they all go? It took federal troops to enforce integration, lynching to enforce segregation, all in our lifetime but to say there are still problems today is causing a problem?
Amazing.
Guess that's why we all talk about lapel width and work wear.

It's good that you sometimes write about racism. Look around our section of the blogosphere and you'll find plenty of racists.

Trad does not equal racist.

Thanks for the post. It was easy to take HHH for granted. He was impressive. http://www.imdb.com/title/tt0054205/

The Ivy Look was the symbol of those institutions and others with a progressive mind. It owned the tools of reason, the scientific method, a progressive can-do attitude that was positive in spirit, innovative, empathetic to the sufferings of others, and a healthy sense of wry, confident, self-deprecating humor. That's what it will always be. The "heartland" &the Teabaggers, etc., is nothing new.

Well. You folks got your way, again. Better than it was?

We lost, I'll admit. It's not our country any longer, so we've no right to complain. Still, I'm not sorry we fought.

Naw he is kind public relations'ist though.. and hipsterist, and cheap shoeist... Tintin, you you do not have a dream where all shoe brands are judged by the content of their interior and not by the color of their leather.

As a Southerner, I have been lucky to know most people in my life have been judged by the content of their characters and not by the colors of their skin.

In my 2001 high school graduating class, I had the same number of African-American students as my mother had in 1968... Two. It was only when my mother mentioned it did I realise I had known very few blacks growing up. College and life has changed that experience, but it was quite an eye opener at the time.

"but the south will always be a part of me and I'll also never belong."

I totally relate to this.

Oh my goodness -- you said Hell at lunchtime. May I ask, just how did the principal respond?

Given the time, I could understand it if you had used it deliberately in class or said it to a teacher, but to utter it among peers at lunch seems pretty tame.

I assume this was a public school. Were they still reading a Bible verse and/or saying a prayer as part of morning exercises back then?

I do think that the pendulum may have swung just as far in the other direction when thinking about today's high schools.

Not as good as it was. Better than it will be. Scary.

I enjoy your posts.

I'm 9th gen southern, and was a HS senior in '68, and you're dead right about the ambience.

"A rich fireman."
Ha! How'd that work out for anyone who became a fireman?

Your reference to "Teabaggers" is juvenile and erroneous. In this day and age, when image so often dominates substance, its imperative we understand the impetus of a movement b/c any new group is quickly adulterated by more established interests. These formative groups are our culture, really. All later iterations are false and tend to mislead.

The Tea Party (I do not associate with them, but I DO like knowing what I'm talking about) was formed by Conservatives railing against the rising tide of Federal income taxes funding ever-larger bureaucracies. The name is an acronym for Taxed Enough Already (T.E.A.) And just like the Occupiers were co-opted by the SEIU and CWA, among unions, the Tea Party was co-opted by the GOP's favorite voting base (shakes head) the religious right-wing-nuts. Don't conflate the two groups; the early TEA Party movement is much more savory than those who now wave their flag.

Bull....
In 1968, I traveled the South. They had fewer problems with Blacks (not African Americans, unless I have to call myself a Lithuanian American.)than we had up North.
I was at Parris Island for 16 weeks, and that was my entire previous experience in the South.
In South Philly, our barrier to those problems at 2nd and Snyder were the longshoremen who would come out of the bars with their longshore hooks in hand to respond to any calls for help on the street.
They never called the police.
Oh my, frontier justice.
It worked.
The kids now have the White Guilt,
and feel they need to make some "restitution.
In Korea, if you felt that way, you died.

This sounds similar to East Texas, 2007, where I landed my first librarian job. I spent more time helping patrons look up lottery ticket numbers than navigating databases. I was called racist by an African American supervisor when I listed costs for a "WASP Speaking Engagement" on a purchase order. (The program was about Women Air Force Service Pilots, but, unfortunately, I didn't spell that out.)I know this supervisor may have been trying to do a reverse-prejudice-thingy by standing up for White Anglo Saxon Protestants, but, truly, I think this was a case of someone who was poorly educated who was promoted too quickly, maybe through affirmative action, and he needed to justify his position as a manager.(By ranting like a jackass.) Now that I no longer work there or live in East Texas, I milk this story every chance I get. Thank you, Tin Tin.