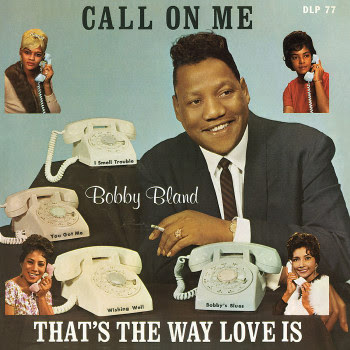 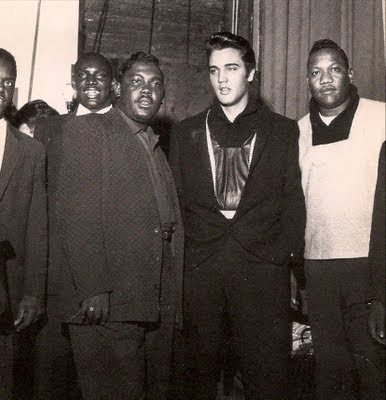 "I think the year was 1963, and my date was a young Broadway actress who became my first wife. I can't remember the name of the club in downtown Brooklyn for the life of me. Seeing Bobby Bland that night helped get me into the relationship, but the marriage didn't go so well and I had to get out of it myself." G. Bruce Boyer


Bobby “Blue” Bland was born Robert Calvin Bland in Rosemark, Tennessee in 1930. The “Blue” didn’t come into his name until his family had moved to Memphis and he started hanging around the blues joints along notorious Beale Street with cats like B. B. (Blues Boy) King and Johnny Ace.
"If Beale Street could talk, if Beale Street could talk,So many married men would take their beds up and walk.Except one or two who never drink booze,And the blind man on the corner singin’ the Beale Street Blues."

By 1950 Bland started singing with – according to music historian Albin J. Zak – a “loose conglomeration of musicians known as The Beale Streeters. Besides Ace on piano, the group included B. B. King on guitar, Earl Forest on drums, Billy Duncan on saxophone”, with Bobby supplying the vocals, as well as working for other blues musicians doing any odd jobs.

For a while he was B. B. King’s driver after the guitar player and singer had several hit records. Bland himself cut his first record in 1952, about the time a young Elvis Presley probably would have first heard and seen him around that part of town.

He quickly became a part of what was in the air, the incendiary blending of gospel-blues-R&B music that was being developed by Sam Cooke, Ray Charles, Jackie Wilson, Chuck Berry, James Brown and other early 50s musicians into what became known as Rock ‘n Roll.

But it wasn’t until four years after he’d first stepped into the recording studio that Bland cut the song that made him: “Farther on Up the Road”. Thereafter he had hit after hit on the R&B charts – in 1961 he was named #1 Artist of the Year by Cashbox -- even though he never managed to cross over to white audiences then or later.

Bland had a unique voice and style, an unforgettable blend of sweetness and hoarseness, alternately smooth and rough like seersucker, that could whisper like velvet one minute and growl like a wounded tiger the next. The songs that he recorded in the late 50s and early 60s – “Farther on Up the Road”, “I Pity the Fool”, “Cry, Cry, Cry”, Turn on Your Love Light”, and “That’s the Way Love Is” remain exemplars of that incomparable style today.

That’s the short early history of Bland. What isn’t usually noted, perhaps not even remembered, is the power and charisma of the man on stage. I only heard him once in a club in Brooklyn, but it was enough to know he had an incredible stage presence. He wasn’t overtly or typically handsome, but he made up for it in pure scintillating style.

His dress was as cool as you could find: slicked back hair which fell to the side in waves, lustrous laser cut mohair suits of pristine Continental styling, blindingly white dress shirts, highly polished black Chelsea boots with Cuban heels, and that gigolo-thin mustache. And his demeanor charged with sensuality as he leaned into the driving melody.

The women in the audience went wild for Bobby Blue Bland, screaming rapturously with every little gesture or cooing sound he made. They would have torn him from the stage and been on him like a dog on a bone. Everything about him shimmered in the limelight.

So you take it where you find it,or leave it like it is.That's the way it's always been.That's the way love is.
Discography
Bobby Blue Bland: The Anthology (Duke Peacock)

Two Steps from the Blues (MCA)

That Did It (MCA)

Soulful Sound of Bobby Blue Bland (Half Moon U.K.)
Posted by tintin at 09:48

amazed that you know about this stuff.

do you like/know eddie hinton?

Bought them both on cassette at a truck stop my senior year of college on a bus trip from Vermont to Daytona Beach. Those albums and "Exile on Main Street" define that trip for me.

Your post got me to pining for Carolina Beach Music, so I started streaming the sation out of North Myrtle. What did they play? BBB, Members Only. 27 Jan is his birthday, according to WVCO.

GBB: Great post. I admire the candidness of that one line: ... Bland helped me to get into that relationship...

Tin: I can neither find Teachers nor Black Bottle at the PA Wine and Spirits. It's a terrible system here in the Commonwealth, but you already knew that.

BBB came to my small college in 1993 or '94. There was something wrong with his voice, almost like he had a tumor or a polyp in this throat. It was surreal to hear him periodically have to kind of clear his throat but make it part of the riff. But he had this incredible force of personality even at what seemed to me to be half-strength on his talents.