The Devil's In the Can 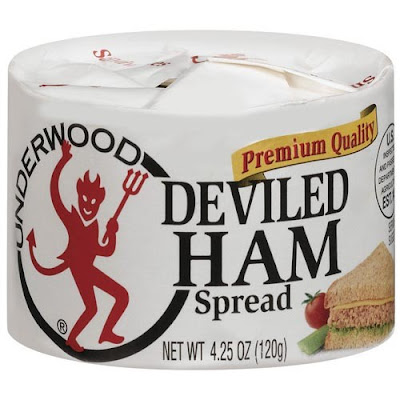 One of my earliest memories occurred in a small N.C. town in the early '60s. An older kid told me he knew where the devil was, and could release him upon the world at will, if he desired. He didn't use those exact words. This kid turned out to be a real moron but bear with me.

Laying on his kitchen linoleum floor, we faced a cabinet. He slowly pulled back the cedar door and there was a single can of Deviled Ham wrapped tight in white paper. A dancing red devil with a pitchfork on the label smiled back at me.

Even in his dark eerie kitchen, at only four or five, I suspected this kid was full of shit. Although, those were not the exact words I was thinking. He told me all he had to do was open the paper wrapper and Satan would be released. I often wonder what became of him. Did he become a politician with a bad haircut? Maybe a preacher or an insurance salesman with a bad haircut.

Eighteen years later a mentor told me, "Just 'cause he said it don't make it true." This was fairly radical for me seeing we were in the army and my mentor was referring to an officer. There's always been something about those words. What is it the meter? The honesty? The humility in how it was said? For me, it was poetry.

They're also a filter everything I hear is run through. Never understood why it's one of my earliest memories although I can only hope it's not prophetic. Of course, if I were you, I wouldn't listen to me.
Posted by tintin at 11:33

Canned meats ain't what they used to be. I was more of a Vienna sausage boy myself though, and that's no shit.

I once stood in a grocery store aisle and pondered, "what exactly is potted meat food product?"

Oh, and I know for a fact the president is Kenyan because I live in Moscow next door to his sister, who by the way has a blog called "authentic Ivy Trad hipster clothing on the street .com"

There's a funny current in your latest stuff. Changes afoot?

Ever have Polish sausage in the can?

Deviled ham and Velveta on Colonial white bread, a bag of Golden Flakes and an RC Cola..."Lunch of Champions" in the South. ME

I need to remember that more often.

But the saying that the camera never lies? I need to remember that one doesn't hold up.

I went to college with one of the Underwood descendents. He was a very wealthy kid.

I always thought that "Devil in the can" referred to the aftermath of eating it.

One reason I like visiting Germany is because of their wide array of spreadable meats. Seriously.

Good for you. The kid is probably in jail.

Basically scrapple in a can....with some mayo-like binder polymer crap..all lips and a**holes...everything but the squeal..and in the mid-70s there were always a few cans in our cupboard. Now, I wonder who was the marketing/packaging genius who said" what if we WRAP the can in paper....?"
Always a half-wit in the neighborhood who tries to sell little 'uns on their mystical powers...

"Just 'cause he said it don't make it true."

But if you read it on the internet? Fact.

wait, we got all the foodie hipsters preachin' "tail to snout" eatin- what the hell is that if it aint Underwood... the french just call it "rillettes"- sounds better, as does everything french

What is home without
Plumtree's Potted Meat?
Incomplete.
With it an abode of bliss.