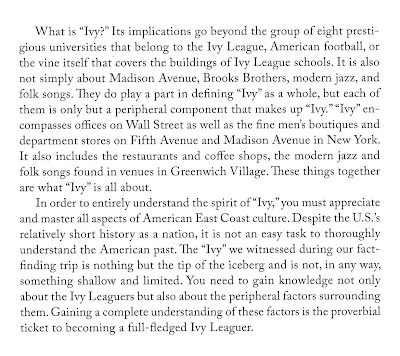 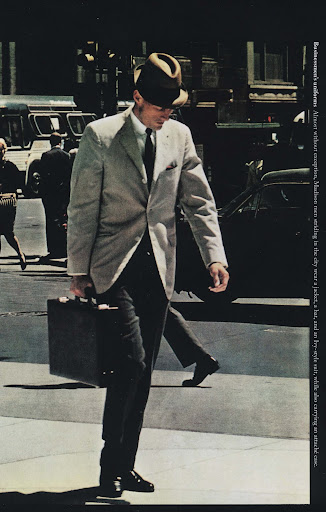 So why do you think I'm gonna buy this book if you're gonna give it to me for free?

Orthodox Trad- Didn't think anyone would catch that.

Holly- How goes the biz?

Lwing- Today's the last day, cowboy. No more scans. Cough it up.

OK, it could be me, I'm admittedly not a native Easterner, but didn't this intro in some chiasmic sort of way say, "Ivy isn't just A,B,C. Ivy is really A,B,C."

MAth is not my subject, but I'm studying hard to master Weejuns.

That guy could almost be Don Draper. The book must be important to you for you to reveal the-man-behind-the-blog.

The title of the book has had me mulling for quite some time. I don't know if Take Ivy is a sort of misinterpretation (not a mistranslation) of English or not, but here's a thought: Could it be that what the actual intent - in American English - would be is "Get" Ivy, as in get the look?

A culture such as Japan's might see borrowing from Western cultures as expected, especially in fashion and pop culture. Hence "Take." But a gung-ho, constantly changing culture such as ours would expect us to "Get" what we desire. Is that maybe where the author(s) were going with the title?

Maybe you have already addressed it elsewhere, and I missed it. What do you know about it?

brohammas- I would chalk it up to the translation.

DB- 'Take' is from Brubeck's 'Take Five' At least that's how it was 'slained to me a couple years ago.

I see you've broken cover to promote this book. And take is from Brubeck's Take Five.....I can remember seeing him playing it in London in the sixties