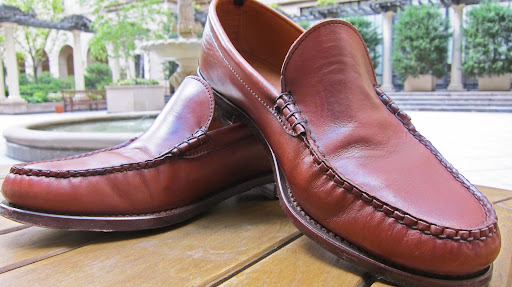 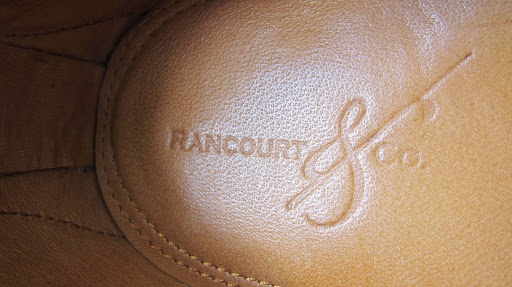 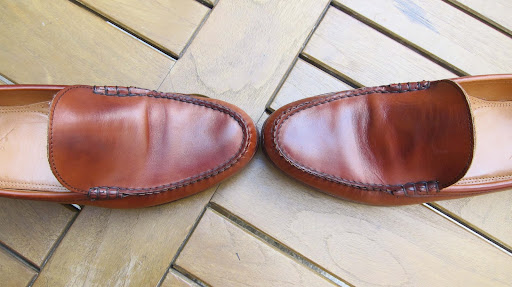 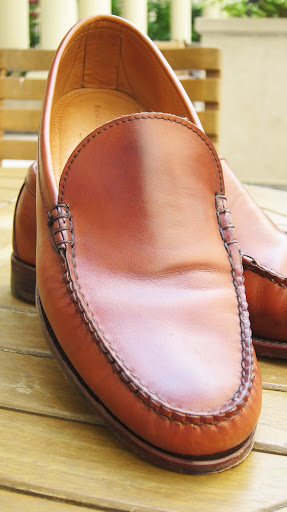 This is Ron Rider's Venetian. And Rider, in my book, is a God. A visionary. And it's OK if you've never heard of him. He, like so many I met this week, work in the background of the apparel industry as sources. Ron is the source for some very big names you have heard of. And they come to Ron for shoes.
A few years ago I fell in love with a shoe called the Yuma. A vampless moccasin known by the trade as a Venetian. Simple and elegant and void of any unnecessary detail. I saw one made by Cole Haan in the early 90's when they still owned a factory in Maine. It came and went and I missed it. Many companies have made this shoe. Most have failed. It's not an easy shoe to make.
November of 2008, Florsheim, aka The East India Leather Company, released a Yuma and renamed it the Langsford. Cheap plastic leather and a too tight instep but man it was beautiful. I bought two pair and wrote 'em about here. I'm throwing them all in the dust bin.
I met Ron at the Warwick Hotel where he was showing his shoes out of a suite. The room was thick with the smell of leather. All it needed was some cigar smoke and you could be on the 4th floor of the Union League Club in Chicago.
Ron had these Venetians made in calf by Rancourt in Maine. He's doing them in cordovan for Leffot in NY. He gave me these (I'm a sample size). I insisted on paying. He said wholesale. What would you do? I've had an obsession with these shoes for almost three years. And these even fit. Like a glove.
We talked. I learned. A lot. This guy is the real deal. If this blog does nothing else - it will tell you about real deals. And real people. Ron Tweeted earlier in the week, "In the city today. Looking forward to steeping on the feet of any guy walking around in flip-flops with my big boots."
Posted by tintin at 06:01

Any information on sizes, price, availability?

Jay- Ron tells me they'll be available in October. If you're in a hurry - there's Leffot's cordovan in natural. Looks just like the calf.

Ron is great. I've bought three pairs of shoes from him, two of them custom jobs. He's an invaluable resource and a good guy.

Those are gorgeous. I was born and raised in Lewiston, ME. My great grandfather moved there from Canada to work in one of the many shoe mills that lined the Androscoggin River.

I didn't know about Rancourt, though. So glad to see that my hometown is still turning out amazing kicks!

Wow those are beautiful I own a pair in the natural cordovan from Leffot, they only leave my feet when I shower and sleep. Wear them well I'm sure you will.

Interesting. The Leffot Venetians were featured over at Ivy Style a while ago, but the majority opinion was that they were too plain (an opinion I share).

Your shoes look to be well-made of nice leather; I just think they're missing something--though I do understand the appeal of keeping things simple.

Those shoes are things of absolute beauty.

Jay- How tough were the cordovans to break in unlined? Always been a concern.

FM- That's my taste and it would appear plenty of others as well.

LPC- I think they are too. Understated is a good word. Although most people don't know what it means.

Jay- How tough were the cordovans to break in unlined? Always been a concern.

FM- That's my taste and it would appear plenty of others as well.

LPC- I think they are too. Understated is a good word. Although most people don't know what it means.

A huge shame so few makers attempt such a classic and minimal style of loafer! I bought my vampless Lewis from Bass last year and just searched for another pair and it seems they're already done with them. Alas the quality of the Bass certainly is not on par with Ron's offerings, but I need it in black.

I like the pictures of the naked women on your blog. Very understated. Like your taste in shoes.

De gustibus non disputandem est and all that. They're clearly well-made shoes; there are people who like Venetians. It was not my intention to disparage these particular shoes or the design or the people who like them. Not my cup of tea, that's all.

Then again, I consider penny loafers to be too plain.

Thanks much and glad you like 'em! Kinda funny watching you walk down 6th with Ralph's shoes in your hand and mine on your feet.....you gave his to the guy at the bustop, right? Cheers - till we meet at the bar.
Ron

Ain't he a treat? He knows his business inside and out. A fine man. Ron made me the only pair of loafers that I own that fit my flat feet. Which means that I can walk around in them without walking out of them. In fact, half my shoe wardrobe comes by way of Martegani, etc... Looking forward to trying Rider boots soon.

Congratulations to Ron on the "Arthur" exclusive. Look for him on a billboard in Times Square soon.

Glad you two caught up.

I'm behind in my blog reading, hence the lateness of this, but these are such a beautiful color. That alone should sell a few pairs.