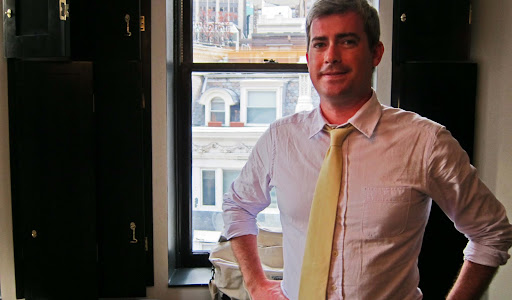 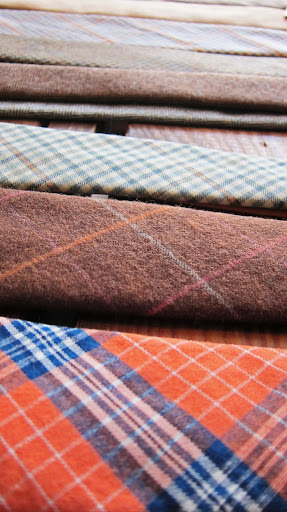 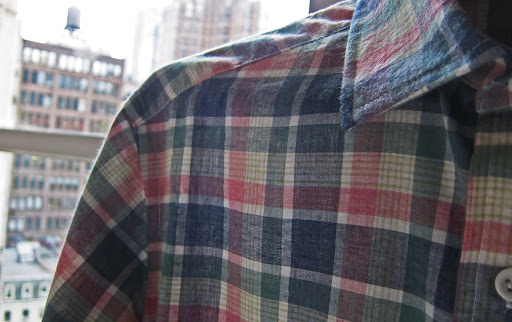 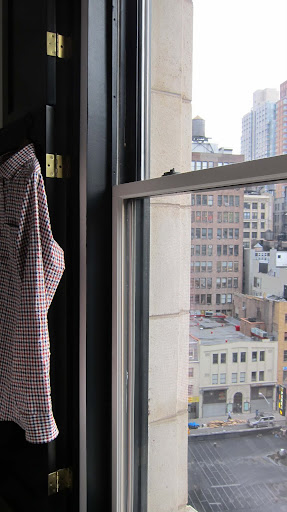 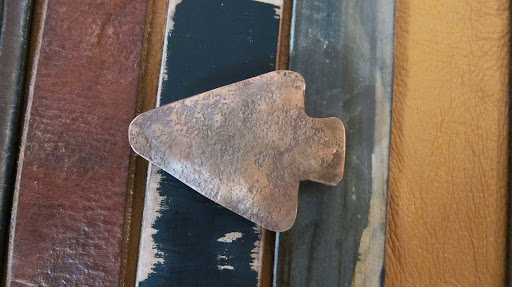 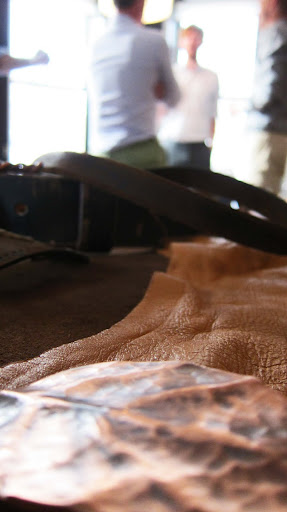 More of Billy's copper & leather
Mac McMillan of Pierrepont Hicks thought to avoid the crowd at the Capsule show and display his wares in a Loft at the Ace Hotel. The Ace reminds me of a Romanian Youth Hostel but the young man from the UK who rode up in the elevator with me told his mates, "Shee, wot I likes about the Ace ez etts not so pre-tent-ches, yeah." Hello, Ian Wright (Ian's a hero btw).
Being the pretentious git I am, I was wearing a blazer on what had to be one of the hottest days in NYC. Entering the loft I was greeted by Billy Moore of 'Cause and Effect' with an offer of Moonshine. "That'll certainly hit the spot." I thought. Turns out there was a keg of beer. Billy poured me a cup and Mac came over and introduced himself. I introduced myself and my blog to which Billy opined, "God, another fuckin' blogger." and walked away - barefoot.
I was introduced to Michael Maher of Taylor Stitch and checked out his shirts. One of four young guys starting up their first company with made in San Francisco button downs. Hard not to be impressed with the energy. The look is not my thing (me being pre-tent-ches and all) but you can still respect it.
I like Mac's line of ties and bow ties a lot. It's pushing the 'hip' factor but there's no reason your Uncle Joe wouldn't enjoy getting one of these ties as a gift. I may have just kicked the cool factor down a couple notches by writing this but it's true. Made in NYC, they're unique enough for anyone.
Now Billy is another story. He has no web site. In fact, I can't find anything about him or his belts on line. I ran into Billy at a party the next night and noticed he was wearing shoes. He was also kicking an Exxon shirt with his name in cursive script. Billy makes belts (not so much) and some copper buckles(better) . Especially that arrow head. I asked him about his comment regarding bloggers the prior day and Billy said he didn't mean old farts like me but he meant young 20-ish hipsters who haven't lived long enough to know jack shit. Or, something like that.
Billy and I sipped our Pabst Blue Ribbon beers in a art gallery where they were selling khaki jeans for $225 and I grew to like him. That's what a lot of this is. You may not be crazy about someones line but you can always enjoy their passion and honesty for what they do. Hey, Billy. You need to write a blog. If you want a belt or buckle or just a hard time - shoot Billy an email at: billy.causeandeffect@gmail.com
Posted by tintin at 12:03

Guy should learn to hold his tongue....it was rude...but more importantly...dumb from a business standpoint if he wants to peddle his belts to the buying public. I would have been tempted to spit my beer on his unshod feet and say: "Well, fuck off then...you and your shitty belts.."
Your patience and poise is to be commended...Good thing he made it right the next night. By the way...why has PBR taken on this hipster cult status....the stuff is swill..and coming from me that is damning cause I like miller lite.

As I read your account of your elevator ride I was hearing Ali G not Ian Wright !

I love that last shot. All the textures and the depth of field.

Lovely ties and shit, but they are a bit too skinny New York 'New Wave'-style for my taste at this age.

Billy is absolutely right about kid-bloggers, of course, but his manner of face-to-face expression leaves rather a lot to be desired. I would have been tempted to crack open his nose.

I'm starting to picture you, T-Dawg, as some sort of NYC gossip columnist for the city style blogger set. Or something like that.

The PBR thing really defines the reverse hip 'curated' aesthetic that kicks. It's so sick, dude.

LBT - I'm calling the NY Post. Maybe I can score some NY Press plates for the wagon?

Alice- Coco said, "Creativity is the art of concealing your source."

Agreed on the ties: nice but too narrow. I wore 1" ties in high school, when I wasn't much wider than the tie; now, I feel a little self-conscious in a 3¼" tie (like the vintage madras I'm wearing today).

No excuse for Billy's rude and vulgar comment. I wish you would have taught him some manners with your fists, tintin.

FM- Sometimes the very rude are to be the most trusted while those with manners who flatter are figuring out which two ribs to slip their knife between.

Yes--sometimes. I would hope not often.

In our modern and debased world, rudeness is seen as "honest" while manners are seen as "insincere." Yet another way the modern ethos has turned tradition and decency on their heads, and has made a virtue out of antisocial behavior.

Would it have hurt anyone if Billy had kept his comment to himself? Would he have made a better impression if he had done so?

As we heard in Blast from the Past, "good manners are just a way of showing other people we have respect for them." A few more quotes here. (Lest we forget, some gang shootings are due to people being "dissed.")

Here's another thought on the importance of manners.

I don't agree that rudeness is seen as honest. Had I punched Billy, as you would have me do, I would have missed a wonderful opportunity to meet someone. I would have caused a good deal of commotion. I could have been arrested for battery. Billy would have sued me. And we wouldn't be having this discussion right now.

Instead, you might have heard about it through another blog and upon hearing of it you may have thought I was fucking crazy to punch someone because they mumbled something about, as it turns out, other bloggers. Just a 'what if' scenario for you.

I would like to add that having a tailor or a well fitting wardrobe does not a gentleman make. If you believe that I have some Alien Abduction insurance to sell you.

Well, my "resort to fisticuffs" was a bit of rhetorical excess. Perhaps I was influenced by my viewing of so many older movies where a (perceived) slight was followed by a fight (the Southern guy in Royal Wedding, a movie I own, being a prime example).

"I don't agree that rudeness is seen as honest."

Hmm. Perhaps I misworded this. Does it work if we substitute "being direct to the point of insensitivity" for "rudeness"? Miss Manners often receives letters from Gentle Readers on this very topic.

Agreed that one can be a gentleman without a tailor or an expensive wardrobe--but don't you find yourself more likely to be on your best behavior if you're dressed up?

There's something to just being a fucking New Yorker and callin' it like you feel it.
Your Billy tale intrigues me.
We have someone so artful with his craft, no contact or public awareness is even necessary or purposeful.
We also have someone wearing a working man's shirt that is so hip it spins through obvious, cheesy ironic right back around to actually ironic?
Go Billy Go.

Being there firsthand and having spent a good deal of time with Billy, one must take his comments with a grain of salt. It is simply his humor. He can give it and he sure can take it as well. That being said, I have met very few people on this earth that are as true of a friend as him. Always asking if he can help out and when it comes down to how he dresses, I applaud him. Style is a personal thing. Whether it be raw denim blue jeans and converse or a tailored suit. Neither is right or wrong. Both are a testament to style and quality in their own right. Something Billy understands better than most as he spends 10 hours a day hand pounding buckles as well as cutting, tanning, oiling, and assembling all of his belts by himself. There is not another soul behind the scenes. Just him...

As for acting better when you are dressed up, I think that can be the case but people also use that as a facade for worse acts.