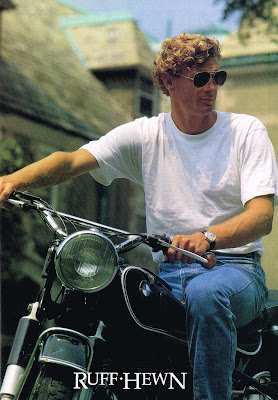 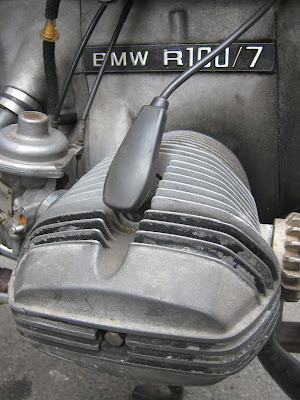 An Object of Desire Far from the Ramrod 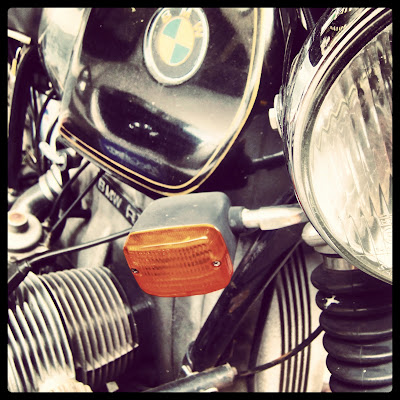 Somewhere in Chelsea - back in '85 - six vintage BMW motorcycles in front of a bar on Tenth Avenue. Five black. One white. Stopped - dead in my tracks. I ask Herbst to hold up, "Geez, man. Look at these! They're beautiful!" Herbst whines, "Tinseth. Lets go." "Hold on. What's your rush?" I lean over a speedometer to check the miles. "Tin-seth! Come on!"

I'm thinking, "What's his fucking problem?" Another voice. Deeper -- Closer. "You like bikes?" I look up to see three men covered in black leather and - for the first time - I see the name on the bar. 'The Ramrod.' "Yeah, I like BMWs," I say and turn to see Herbst a quarter of a block away with a smirk on his face.

"Why don't you come on inside and join us?" The invitation grunted by a man with a ring in his nose, a braided beard and a tattooed head. He takes a swig from a long neck Miller and holds a cigarette between two fingers -- his thumb hooked on black leather chaps. I stand and walk, not too quickly, towards Herbst. "Thanks. I better catch up with my buddy." "He can come too," says the tall one... and they all laugh.

Herbst was a free lance archeologist (Have Trowel- Will Travel) working a dig for the NPS under the Main Immigration Building at Ellis Island. I was loaned to him during renovations at the Statue of Liberty and most days it was just the two of us digging through oysters and mud.

Ellis was a garbage dump for Indians living on Manhattan going back five or eight hundred years - give or take a few hundred - based on the carbon date of a femur we found. In addition to throwing away oyster shells and refuse on the island, the Indians also left their dead there.

We had time to talk - looking for dead Indians. Herbst had a thing for Jeremiah Johnson and early trappers. He told me they'd eat once a day but dinner was five pounds of buffalo. There was a moment of silence as trowels scraped. Exposed light bulbs strung above us cast a honey yellow light on the dark dig. Herbst broke the silence, "Jesus, Tinseth...just imagine the huge piles of petrified shit all over the West."

Herbst had a Tudor Submariner and admired my Rolex Sub until he discovered it wasn't a chronograph. I don't think he ever like me after that. Still, he invited me to the wildest Manhattan party. All apartments on one floor were opened up. Jazz band in one. Bar in another. Food in another and so on. Herbst introduced me to a numerologist. She was pushing 40 in tight Guess jeans and a silk blouse.

Necking on her sofa later that night, she breaks away and stares at me. "I'm sorry," I said. I think I've gone too ..." She stands up, takes me by the hand and pulls me to her bedroom. She cut through a lot of bs.

It rained the next morning and we stayed in bed until late that afternoon. I treat her to a cheap brunch of French Toast and Bloodies at J. Melons then make tracks back to her bedroom. Grateful, I thank Herbst the next day. He points his trowel at my head and berates me under the honey yellow light, "Tinseth, she's the older woman. Don't you get that? She's supposed to fucking pay not you." This pissed him off more than my watch.

I haven't talked to Herbst in 12 years but called yesterday to fact check and catch up. He told me he had laryngitis and couldn't talk long. I finished fact checking and he promised to call back. I doubt I'll hear from him again. That's okay. I'm amazed by the trip I went on with a motorcycle I never owned.

Update: So much for fact checking. The bar was the Rawhide ( 8th Ave bet. 20th & 21st) and not the Ramrod. Apologies for my lack of leather bar knowledge.
Posted by tintin at 15:33

You may enjoy these guys. Good photography, interesting bikes.

Must be careful when it is biker night at a local gay bar....cross on the other side...nice bikes or no...

Main Line- It was 2PM. On a Tuesday. I worked weekends.

There are just some things that Italian crotch rockets will never be able to replace. One of them is this great story.