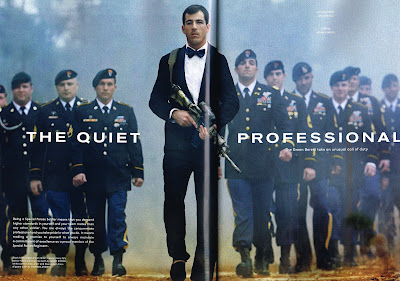 Velvet slippers for the quiet professional... 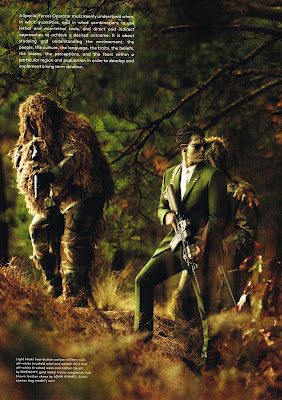 "You know what Delta's gonna do when they see these pictures?" 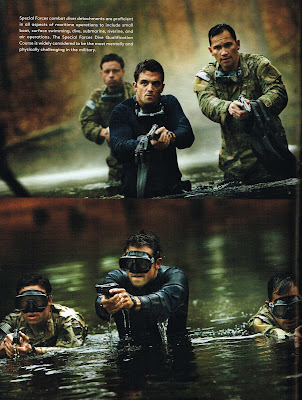 "We gettin' hazardous pay for this?" 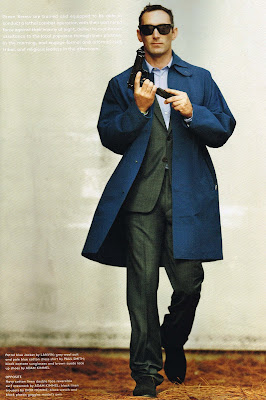 About to deliver some humanitarian assistance... 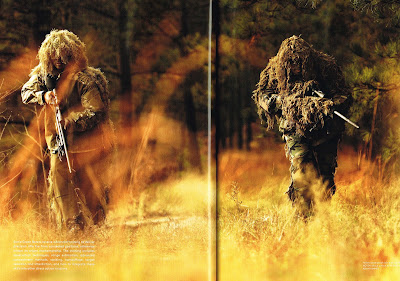 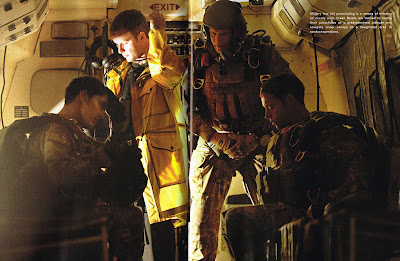 "Hey, at least you didn't have to empty the shitter like the guy in the yellow coat." 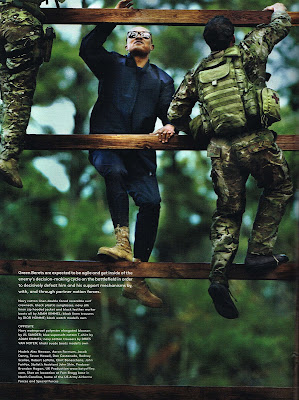 "That's odd. I only get the funny feeling when I climb rope." 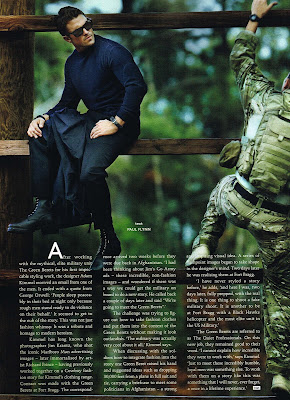 "Could you get me a Latte?"

Designer Adam Kimmel styled a photo shoot with the 3rd Special Forces Group at Ft Bragg. Usually a reader will alert me to a story like this and save me from open-mouthed shock at a public magazine stand. GQ Style-U.K. calls the piece, "The Quiet Professionals." There's some irony for you. I don't think anyone at Ft Bragg will be calling 3rd Group quiet anymore.

Kimmel had 'Marlboro Man' photographer Jim Krantz shoot the spread for the magazine whose, "... challenge was to take fashion clothes and put them in the context of the Green Berets without making it look outlandish." You can see more of the Green Beret photo shoot here at Jim's web site. Jim must love shooting things that'll kill ya.

I don't think it looks outlandish. Silly, yes. I doubt Kimmel knows much about the Green Berets and probably less about the sacrifice a Staff Sergeant makes for $36,000 a year. But in fairness to a clueless hipster fashion designer and British fashion magazine -- the U.S. Army said yes. Which makes me wonder about future military collaborations with magazines.

Labels: Army Stuff, GQ Style, hipsters, Marketing, Mine are so big I can't walk, Off The Reservation, Velvet Slippers

Interesting shoot - am really amazed they were granted access to do it.
Sort of an odd question: Do you know if the models were models or actual Green Berets? They sure look much more tough than the usual under-20, androgynous fellas that are often used.

OK, this is the right time to bring this up. There was a short article in an Esquire 20 years ago that completely captured my imagination. True story, it claimed. It was about a gentleman who went through Vietnam as SF. Memorably, he arrived at his FOB watching a C-47 gunship zippering the night sky. He did a tour or two, much of which included drinking to oblivion in the NCO club. He returns to New York and has the conversation you've alluded to previously ("What do you do?" "I kill people for a living" "Funny, you don't look Italian") and finds himself as the Marlboro Man. Spends the rest of his career living the life of a NYC model.

The denouement: he drinks himself to oblivion at some fancy Manhattan bar every night until he realizes "I'm still playing Dead Bug, but it's no longer in Saigon."

Wish I could find that article. It made me want to be someone else.

Off to the newsstand to buy GQ-UK.

What looks just silly to the forty plus set is accepted as normal or even cool by adolescents. GQ and the Public Affairs branch both know that. That is why this crap is dangerous. It's a joint psy op where one group takes the cash and conferred legitimacy while the other group takes the minds with the bodies to follow later.

It was a good business model for Hugo Boss...just sayin'...

Makaga- I think there's a mix of soldier and model. I just don't anyone in the Army, much less SF, who would ever do this.

Michael Rowe- I'll give you 24 hours and then I want your very best.

Oyster Guy- You nailed it. This is recruiting 101 but done from a distance. The UK mag draws less fire from writers stateside, like Cathy Horyn, who could really chew it up.

Hugo Boss did those smashing SS uniforms with skull and crossbones. Did he also do the Hitler Youth?

"...he became an Reichszeugmeisterei-licensed (official) supplier of uniforms to the Sturmabteilung, Schutzstaffel, Hitler Youth, National Socialist Motor Corps and other party organizations."

Dumb,Dumb,Dumb
I would expect it from a leg unit... maybe.

Jeff- I don't think 1st TSC would do this in a million yrs.

It's the ghillie that kind of tips it in - to the shit basket, that is.

Seaman Staynes, the Rear Admiral wants you on the Poop Deck.

Heidi- Ghillie? I'm most impressed. Can you give me the maximum effective range?

I know for a fact that these guys in the clothes are all SF guys. They taught me and trained me. I respect the shit out of em but I'm kind of blown away by what got them to do this.

A damn embarrassment to the country

Quite a radical departure from Bryan's shoot at West Point. Sadly, as Oyster Guy pointed out, this is what sells.

It shows that as a nation we've lost a considerable amount of class. Not in an aristocratic way, but rather in a mature, self-respecting way.

I pity the folks who are inspired by this shoot and purchase the clothes.

When I see waifs weighed down with shaggy suits, it's over, man, fucking over.

Clearly I am not the target audience for this editorial. I tuned out as soon as I saw the troops behind a faux James Bond in the first image.

However, "About to deliver some humanitarian assistance"... he reminds me of Don Draper with a gun. Armed and dangerous. Plus he's got a gun.

Having gone to prep school with Adam, I can tell you that you're correct in that he doesn't know much about the Green Berets, and even less about those making $36k or less a year.

That said, he's a good enough guy, and doesn't mean any harm.

Find the cost of freedom, buried in the ground.
Mother earth will swallow you, lay your body down.

Another generation raring to go "get some"

It's the laying their bodies down that they seem to miss the connection with. War is about killing, not fashion.

The armed forces of the United States has a history of spending money on popular culture collaborations it presumes will increase support or recruitment. This goes way back to John Wayne films through modern video games. Either military psyc ops are utterly incompetent (doubtful) or America's Army was a success (also doubtful), or they're hoping the next time is the magic bullet and actually works (maybe) or someone in an office with friends in Hollywood tells the base commander to do it.

Worth mentioning, the soldiers and sailors almost never have the option of opting out.

I think it's alright. The first couple of pictures are actually pretty cool.

The branding and 'Jason Bourneization' of the Navy Seals bothers me more.

Remember those Bundeswehr surplus parkas that moody loner types used to wear in the 80s? Those were kinda nifty.

I can't give you MER unless you are more specific about the weapon in question.

Anon 24 Apr 00:16 - Thanks for the heads up. I just learned they are all active duty. Some are 3rd Gp and some are training cadre. What we called USAIMA when I was in. There's gotta be a helluva story behind this.

Great Zambo- Try not to be so verbose -- I was looking forward to the Great Ones insight and similar experiences with the Warsaw Pact back home in Estonia.

Matthew- Well said. Look at the success of NASCAR, Country Music, Tattoos, Work Clothes...Reminds me of a county jail in 1976.

GSV- Something tells me that a career or two at Bragg might also be over. But who knows. Some Public Affairs captain might have just made major.

Alice- That's not a gun he's carrying -- that's a weapon. I'll explain what a 'gun' is another time.

Foster- Run this by the boys at the Ruck whatever...

Anon - You lost me at Prep School. Just kidding. As an Army Brat, I went to 4 high schools. Consequently, I don't know shit.

I do that the woman who drove her car into the motorcycle I was riding didn't 'mean' to. She also didn't have insurance. But I don't think she 'meant' to stick me with $30k in hospital bills.

What's that road to Hell paved with?

GI Joe- Killing people is serious stuff. While in Special Forces, my father killed 36 -- personally. There were others he had others kill. He thought it was in the hundreds and he thought some women and children were in that figure. Using these men to sell sunglasses and velvet slippers is an obscenity.

Christopher- I know but I've never seen anything like this. I mean, maybe National Lampoon did a tartan body bag by Ralph Lauren but this is a new one for me.

Anon- There are people who comment here that will tell you I was a moody loner in the '80s. But I wore a field jacket and madras.

Heidi- I thought you were gonna call it a 'gun.' You're too smart for me.

I know. But we can still be blog friends, right?

Sorry, I'm a little behind in my reading. Interesting and strange post. But unfortunately, I imagine that the shoot was probably one of the least surreal situations those guys have found themselves in, in the past few years.

Im in 3rd group and can confirm those homos are not models. Shit is ridiculous

Anon- can you help me? Trying to find the PAO for 3rd Gp

Anon- thanks for the #. Called but no answer. Guess they left early. Will try Monday.

Believe me, but they are not models....to be nonchalant about.

this is crazy, I can't believe any of this. pretty soon we'll have movies made with active duty navy special forces in it, whats next? anyhoo, i think that these actors got paid a lot of money. they should have probably put a couple nine bangers in their dressing rooms. i think they're too skinny to be in the army anyways.

Is it true Special Forces are as tough as the Air Force's Security Forces or the Army's CA teams?