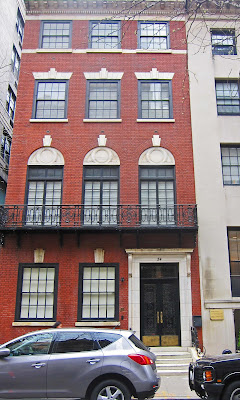 INT: The 6:31PM north bound Chicago Metra train. On the upper deck a man hangs a salmon colored newspaper on the rail in front of him. A passenger points at the paper.

I like to think I was the first subscriber to NYO in Lake Bluff. I probably was the only subscriber in Lake Bluff. I loved the NYO. Wicked smart and with a point of view while the Chicago Tribune was only good for tire ads in the sports section. When I read the NYO I felt like I was in NYC with some very smart people who were not afraid to call the bullshitters out for what they were. A favorite was a send up of Saul Steinberg's vulgar 50th birthday bash by Michael Thomas, "...tomorrow I will be sober but you'll still be Saul Steinberg."

The newspaper was run out of a townhouse at 54 E. 64th until 2004. I swung by trying to pick up something by osmosis or, maybe I thought I could hear the walls talk. No such luck. Better to read the paper's best compiled in a book, The Kingdom of New York, by long time editor, Peter Kaplan. Some interviews with war stories are included as well. Look, if you live in NYC you must own this book...'cause I couldn't find it at the library.
Posted by tintin at 08:44