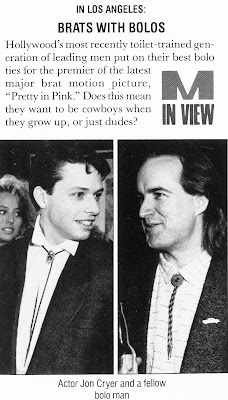 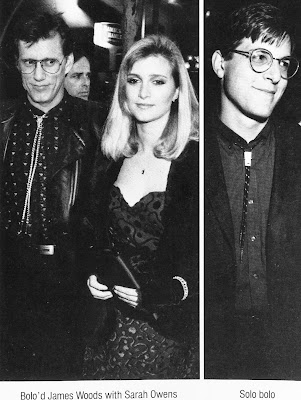 "You can make a lot of mistakes with hair because it grows back. It’s tattoos where I would put my foot down. There’s no coming back from that. If my children were to bring it up, I would calmly explain to them that I used to be really into bolo ties. I thought bolo ties were the shit, especially with my long hair. Now imagine a bolo tie you could never take off. That’s a tattoo." Paul Rudd

Thanks to Grantland via Manshit

Labels: Accessories, Better You Than Me, M Magazine, Ties

During this time frame I avoided this mistake in that I lived in a place with actual, real life, cowboys.
I was not a cowboy.
In a place with cowboys you do not dress like something you are not. Those giant belt buckles can do some serious damage to a poser.

Too true on tattoos Tintin. I gave my daughter the lecture. I had a muscular guy with bulging biceps and tattoos doing repairs on my deck a couple of days ago. These are not going to be a pretty sight in 35 years time. As to bolos they are a bit naff on skinny NY investment bankers or minor actors but on grizzled, leathery oldsters from NM they work fine.

Richmond, Virginia, 1983, huge REM fan who bought old baggy tux shirts at the vintage stores on Cary and who rocked the bolo: Bill Berry, REM drummer, was known to wear them as well (in addition to blowsy tux shirts). See the original vid for 'Radio Free Europe' for my sartorial influences from '82-'85.

Ah, Pretty in Pink. I thought Molly Ringwald was the ultimate. I permed my hair to look just like hers. No worries, of course, because as Paul Rudd notes, hair is easily fixable.

My jewelry from that time is another story. All plastic and painted metal... and mesh tops and hair accessories... Photographs allow these 'style' moments to live on...

But is that an engine turned belt buckle on James Woods? Sartorial confusion.

p.s. Putting an image of Duckie will always make me click to a post. Whatever the subject matter may be.

Good eye, anon. It is indeed. Although not at all surprising with James Woods.

In 1986 I thought John Cryer, Patrick Dempsey and John Cusak were the same guy.

Great Paul Rudd quote. But be afraid, now the cat's out of the bag: bolos will return, as will the receding-male-hairline ponytail...

i hope you have your galoshes read, angel cake.

anon- have you left Fire Island yet?

I can understand tats on folks in really hazardous occupations. As fashion I can't figure out why anyone would permanently put art on their body no one with an eye would put on their wall. I don't get it.

I saw a really pretty woman the other day on the subway with a very substantive and intelligent demeanor. I randomly thought to myself I could spend hours just nibbling her ear lobes! When I checked them out I saw they were complete pin cushions! I mean what are you supposed to do with that? I just don't get it.

So what do you wear to a hurricane?

Oyster Guy- I can look past a lot of things but not swiss ears. I'm breaking out the Gorton's Fish Taco outfit. I love fish tacos and you can't miss with that Gortons hat.

The Bolo tie...particularly appalling when worn with Black Tie...however Ducky did seem to score with a hot blond vixen in the end of Pretty in Pink prom scene...who was way hotter than Ms. Ringwald....
Batten down all hatches JT...my generator is gassed up so there will be ice for Rum & Tonic regardless of this storm.

"I can understand tats on folks in really hazardous occupations."

They've got magical power have they to ward off danger?

anon- have you left Fire Island yet?
oh sweetheart, don't hit me with those negative waves...

Tin-tin's phred/dad:
RE: Brohammas. Been waiting for a great comment like this! I also lived in a place with actual, real life, cowboys (TX) and still do (CO).
I am not a cowboy either.
[In a place with real cowboys you do not dress like something you are not. Those giant belt buckles can do some serious damage to a poser.]
No cowboy boots either unless you are a cowboy -- or rodeo participant.
Nor do you wear cowboy boots for dancing -- unless you're an every day wearer -- cause you'll just trip and fall down and make a fool of yourself.
I prefer riding boots in the English "cut" with low heels. Custom shoe maker here cut them to appropriate height and fitted them so they're as comfortable as a pair of socks. And I don't get the heels stuck in sewer grates.

When I asked him about the bolo, he said, "Probably not as provocative as my choice in underwear, which is none."