Your Tailor & Your Rise 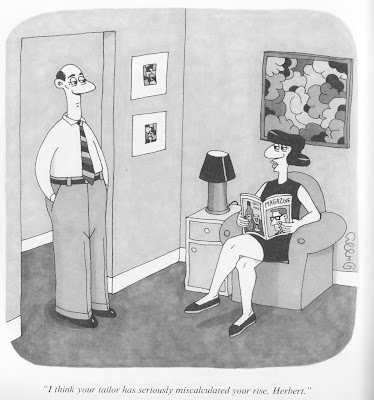 J.C. Duffy (his blog here) writes and draws two syndicated newspaper comic strips, The Fusco Brothers and Go Fish. Prior to the debut of the former in 1989, he worked in newspaper illustration and had an extensive line of greeting cards and related products. His books include Moot Points and four Fusco Brothers collections. His cartoons began appearing regularly in The New Yorker in 1998. He lives in Philadelphia.

I had no idea anyone this funny lived in Philadelphia.

Brohammas - Not sure about hilarious but at least you work clean.

Alice- Her espadrilles look like they belong to Kitty

I don't don't know what this says about me but that painting looks like bunch of tuchases.

C'mon JT...W.C. Fields was from Philly ferchrissake.....and Larry Fine of the Stooges...and Bill Cosby....David Brenner...Joey Bishop(born in the Bronx) but raised in South Philadelphia.....not like you to make such an specious generalization.
As an aside...I cannot get enough New Yorker cartoons...often just brilliant stuff.

Great. Is it just me or does she lend herself to a picasso?
LMF.

Very observant of you. Kittie does indeed like a pointy toe.

It is the use of the name Herbert that makes this truly funny. Love it.

All the cartoons in the New Yorker are brilliant even the ones that are a bit obscure. On another matter aren't we due a health bulletin. "The king's life is moving slowly to a close" or something?