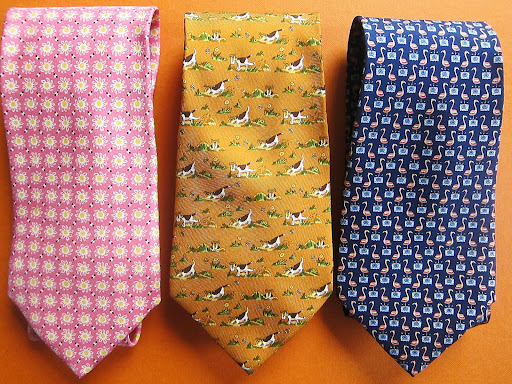 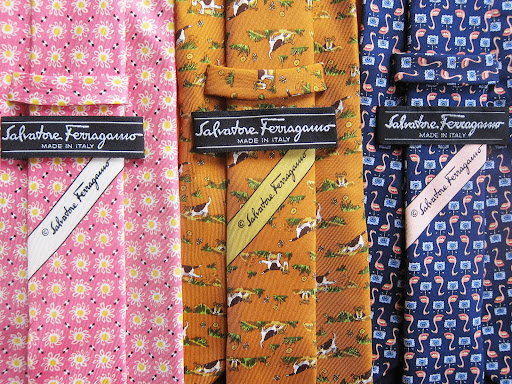 I have a question. I'm a 26 year old working in financial services in New York City. I have a couple Hermes ties and while I love them, they seem too old for me. I also have a number of Vineyard Vines ties but they seem too young. Any ideas? Connor Fused

Dear Con,
You're in a predicament. However, you've provided enough information to work with. A young man (under 35) in an Hermes tie comes off looking, at worse, pretentious -- over reaching at best. Also, older men (over 40) in your office don't like you simply because you're 26. They'll look for anything to disparage and what you wear is an easy target.

I was 21 and driving for a colonel just before I got out of the army. I had known him for about a year, respected him and was flattered he specifically requested me as his driver. Coming out of a G-3 briefing, he climbed into the jeep and said, "Sergeant, I'm so confused I don't know whether to wind my ass or scratch my watch." I'll never forget that or what he told me next.

He told me I was a smart ass. Not so much because of what I wore. Except for his rank and C.I.B., our uniforms and footwear matched perfectly. He told me it was how I walked and talked. He also told me that people would either like me or hate me with no in between. I remember sighing a plaintiff, "Jesus, sir?"

Which reminds me of the time a chaplain in the field was chewing me out for my helmet graffiti which read, "Kill a Commie for Christ." This same colonel came to my rescue and told the chaplain that, "...it's his fucking job to kill Commies and if he wants to kill 'em for Christ, that's his business."

I'm getting off track here so let me wind scratch this up. I said, "Jesus, sir?" and the colonel said not to get him wrong. He loved smart asses but he wasn't everyone. He told me, "You need to be humble. I'm not saying you can't be you -- I'm telling you to be humble 'cause you don't need to wave your flag. It's big enough for everyone to see." I thanked him although I have managed to ignore his advice pretty much the whole of my life.

I don't know if you're a fellow smart ass, Con. But I do have some advice. 'Humble' is not a word you associate with Hermes while 'insipid' is what a designer I know calls Vineyard Vines. If you want something with Hermes gravitas while following my colonel's advice for humility, try Ferragamo. Not the shoes. They're not humble. The ties. As elegant as Hermes but not nearly as in-your-face assertive, the Ferragamo tie walks a fine line of understated style and restraint. Grown up but not middle aged. They're not cheap ($170) but women love giving them as gifts while old farts like me will hate you just a little less.

Update: I have just been advised the colonel retired a major general. I'm guessing I should've taken his advice.

That all came together nicely.

signed,
always a smart ass and never the good soldier

Definitely my favorite kind of tie! Perfect for a 26 year old.

I think Hermes and Ferragamo ties are a phase you go through. I've literally given all mine away except for a quietish Hermes number with grey nuts and bolts motif on red ground. I'm not sure it has a lot to do with smart assery more to do with growing up. I recognize some Napoleons of finance never grow up (tiewise)...that's why they are Napoleons of finance.

-Wow Brummagem, that prose was almost TinTinesque in its insight! Well done.

Separately Tin Tin, is it possible for this blog to accommodate a message board. I'm exhausted trying to find decent shoes (non Asian made [Central American OK-grin-]). I'd appreciate hearing what other readers have found suitable for different work environs. Kcaj.

PS- RE Duckhead comment, simply over written, under edited (after a few too many Schaefer's -grin-). Still curious to learn the price of a back-from-the-dead trademark.

Oi, I am from London. Gi'us all your ties now. Consider yourself looted.

As always, you make me laugh.

That old colonel would kick your ass if he knew you spent $500+ on those 3 ties.

Dear Con, Just go to Marshall's or Ross and buy some Jones NY or Brooks Bros. or RL ties you can find on their racks....11.99....'cause your just gonna get Russian Dressing on'em anyway eating on front of your Computer screens or have 'em clipped by some wench at Scores when out entertaining clients...

Beautiful ties, but absolutely useless for those of us above 5' 10' - even with a four in hand knot.