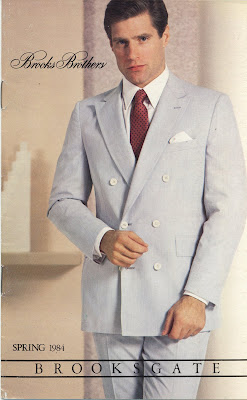 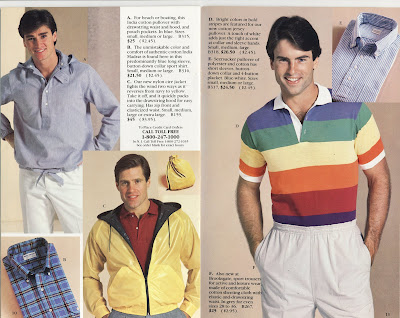 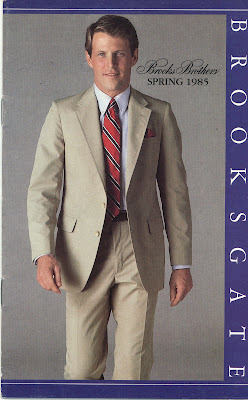 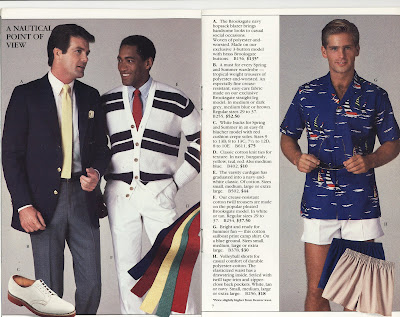 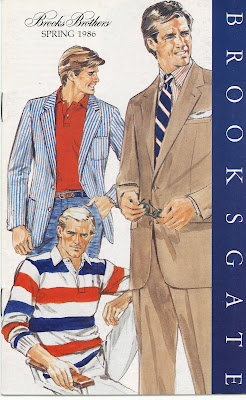 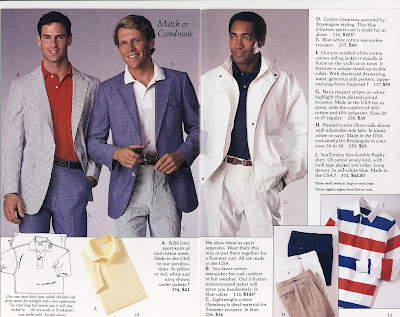 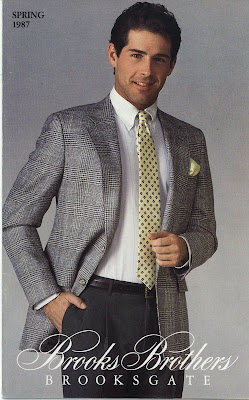 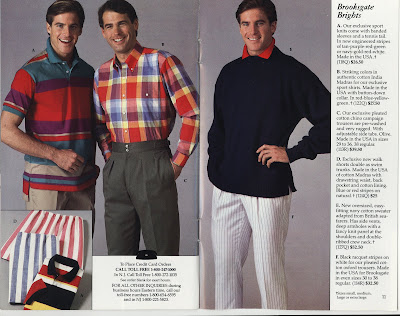 I haven't heard the expression 'B-Squared' in probably 20 years. I'd like to remedy that.

Brooks Brothers closed the doors on it's authentic University Shop in the mid-70s but the idea, and it was a good one, hung around. An entry level line cut trimmer and cheaper for the starving young man of the '80s. Lets face it, in 1984 the $500 Brooks Golden Fleece worsted suit with its 6" drop would look pretty silly on a 25 year old with a 32" waist, a 40" chest and a razor thin wallet.

Brooksgate offered a 8" drop at half the price of Fleece. In short, it was a 'two-fer' and it was hard to walk away from two suits for the price of one. I bought three. Solid navy, navy pinstripe and grey pinstripe. Not a fan of Brooksgate shirts. Too thin with a short collar that caused the B-Squared roll to go MIA. However, outerwear was a steal. A Brooksgate duffle coat was half the price of a Brooks duffle and I'll be damned if I could tell the difference.

Brooksgate even had a catalog. Half the size of B-Squared and filled with photos rather than drawings. They have a certain '80s cheesiness - not unlike a Duran Duran video - that I find comforting and easy to dance to. Some great classics are mixed in with best forgotten designer train wrecks. I love the DB pincord with peak lapel on the Spring 1984 cover while Spring '87 looks like a cover from today's two-fer king, JoS. A. Bank.

As promised last week, the Trad archive deaccession continues with Brooksgate and women's wear catalogs at auction this Sunday. Realized prices last week were moderately surprising to me while jaw dropping to the Golf Foxtrot. To that end, a quick shout out to the boys in creative at 650 --Hey, this is like stealing candy from a baby -- but then, you guys already knew that.
Posted by tintin at 10:07

Thanks for posting this, Trad. I've been hanging out at the Brooks Brothers store on Madison that last few days during lunch breaks. The Regent cut is great for the Brooksgate physique you mention, but, dangit!, not as easy on the wallet.
Maybe they'll bring back a Brooksgate in the future?

Even though the db pincord only has a button hole on the left lapel? It's possible it may have a center vent, too.

Actually these pages don't look terribly different from today's BB catalogs. All these pics were taken before the disastrous M & S aquisition which happened around 1988 as I recall. They tried to turn it into a pseudo Gap and all The Trad customers fled. Ultimately Marks and Sparks ended up losing at least $700 million. Del Vecchio has essentially returned it to The Trad flight path albeit with some fluff and way too many sales.

As addendum to the above comment there's an interesting piece in this weeks New Yorker about buying mens clothes which comments on the glacial pace of change in menswear.