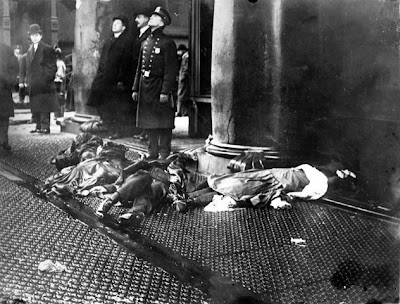 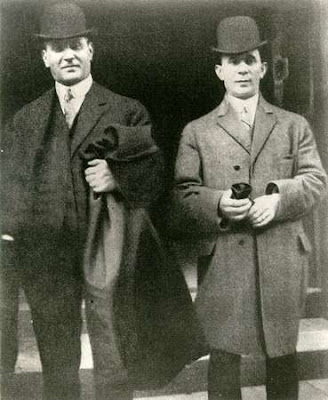 Just before 5PM, a fire broke out in the Triangle Shirtwaist Factory at 245 Greene Street. 146 garment workers, mostly women, lost their lives when escape was prevented because of a locked fire door. A police officer at the scene said that he didn't think he would ever forget the sickening sound of the women hitting the sidewalk when they jumped from the building rather than burn.

Max Blanck and Issac Harris were the owners. They stood trial and both were acquitted. They paid the families of the dead one weeks wages and later settled with 23 families for $75 each. Their insurance company settled with the owners for $400 for each of the 146 families. Blanck and Harris netted a $325 profit for each life lost. Two years later Issac Harris was fined $20 for locking a fire door.
Posted by tintin at 10:20

at least the shirts were made in the U.S.

The survivors interviews are interesting and horrifying.
http://www.ilr.cornell.edu/trianglefire/primary/survivorInterviews/FrankRubino.html

A never identified man for some time stood and the street beckoning the girls to jump....and they did.

Two survivors claimed the fire was started by a cigarette tossed by one Morris Goldstein, described as a Gorilla or Schtarke. Look it up.

Well done. I went a couple years to the FDNY ceremony every year where they raise a ladder to the Sixth Floor of the Brown Bldg, which is only how high the ladders rose in 1911.

I saw a special about this on tv - the great granddaughter of Max Blanck has found all the names of each victim and has embroidered their names on shirt-waist material and I believe, it is now a traveling exhibit in their memory. DMW

More commentary about this tragedy at last week's issue:

From those ashes rose the Unions...

There is a good special running on cable this month about this tragic event...either HBO or Showtime.
Horrible...

Dallas- Ok. I'll bite. What kind of asshole are you?

I learned about this watching Ken Burns NYC documentary. Worth watching if you haven't seen it.

unclelooney- This is from the Museum of the City of NY,

"Max Blanck and Isaac Harris. They were acquitted. Harris was again accused of locking factory doors in 1913 and paid a $20.00 fine. I have some New York Times articles from their archives but the Kheel Center at Cornell is the best bet for anything Triangle related. Start here:

There's tons of info as you know. I thought the lawyer for Harris and Blanck, Max Steuer was an interesting story but what I really wanted was to find out what happened to the two owners. They disappear after 1913.

Also found that Harris and Blanck lived at 324 West 101st St. That was buried in the transcript of the trial.

EVT- Wish I could make it down there today.

DMW- Yes, I saw her too. She mentioned five relatives died in the fire but I've read there were only three.

Main Line- I tried to get the premiere of the HBO special here in NY but couldn't make it. I'll have to wait for the DVD.

Wing- I did catch it. Check out the transcript of the trial for Steuer's cross examination of Triangle employees. With very little tweaking it would make for a riveting play or film.

There is a good special running on cable this month about this tragic event...either HBO or Showtime.
Horrible...

In your accounting Tin Tin you left out the payoffs Blanck and Harris probably had to make to get these verdicts. But nothing much changes. I saw there was a story in this morning's NYT where Wal-Mart just lost a case where they have so far spent $2 million defending themselves against an OSHA fine of $7,000 over one of their employees who was trampled to death in a black Friday dash. They're appealing.

Caught the documentary on cable last night....horrifying..yet I couldn't stop watching it in my disbelief. Oh, and Dallas=Dolt.

"Dallas- Ok. I'll bite. What kind of asshole are you?"

Is there more than one kind?

Joe- Good point about the pay offs. And a better point that not much has changed since then.

There's was a very good book written about the fire a few years ago. The American experience did a corresponding episode(as it often does) soon after. I also remember a made for TV movie from the late '70's early '80's.

There but for the grace of God......my grandmother was that age and lived in NYC. It struck very close to home when we studied the tragedy in school.

This event sparked an international "day of the woman" in Europe.... I learned of this tragedy here wher it is remembered with a demonstration and the yellow mimosa flowers that bloom toward the end of winter...
pity it's not remembered in the states...