For those of you who missed Andrew Dolkart's lecture Wednesday night - have no fear. I'll share my notes. I realize it's late on Friday but based on my Site meter there are a few of you who check The Trad out after work. This is also a senior level class. The penny and the Ray Bans? That's for Freshmen. If you're really clothes mad -- Follow me -- The garment infantry. 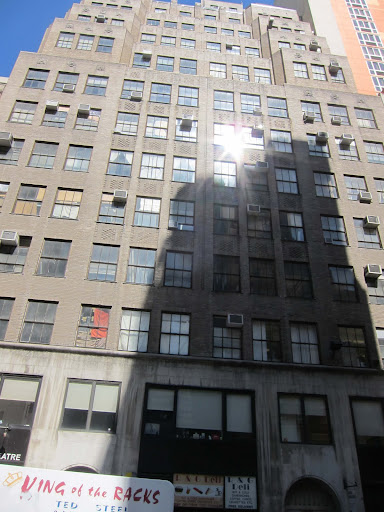 Garment workers and their bosses were moved north from lower Broadway and 5th Avenue over a 30 year period at least three times. The reason? Too damn many of them. At lunch the streets were jammed with workers -- more or less just hanging out.

Retailers couldn't stand them (there's irony for you) and were instrumental in shoving the industry further north and west to it's final resting place today -- Roughly 5th to 9th Avenues from 34th Street to 42nd Street. For me, the sweet spot is 34th and 36th between 7th and 9th Avenues. 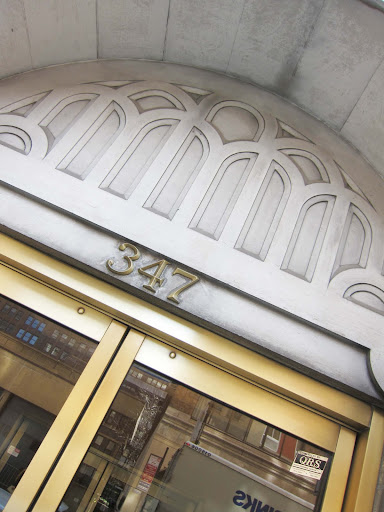 Buildings were concrete with large windows to allow light for sewing and cutting. One and sometimes two freight elevators were located at either end of the building. Lobby's were small (where's the damned lobby picture?) and narrow. 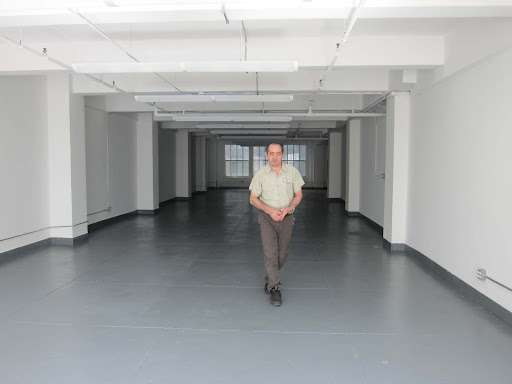 Loft space was set up for cutting and sewing tables with men who were cutters closest to the windows for the best light. 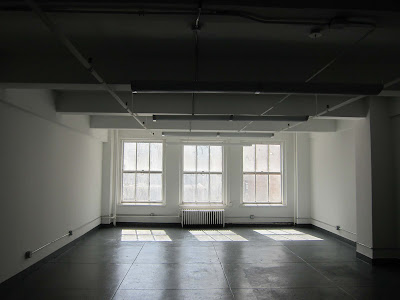 Sewing machines would be back here in the dark but each machine had it's own light. A clue to identify loft buildings still used for manufacture are really filthy windows. Which is how I found this building. 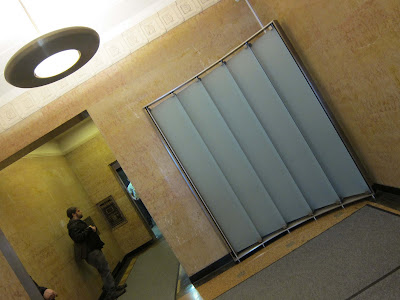 Ok, here's the lobby. See? Real small. And this is common in almost all of these garment buildings. 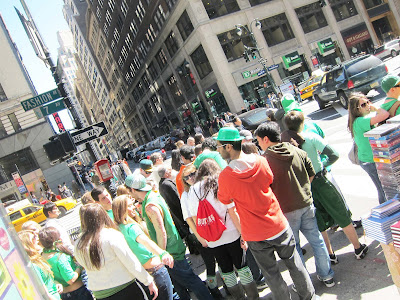 I made the mistake of researching the district on St Patrick's Day. 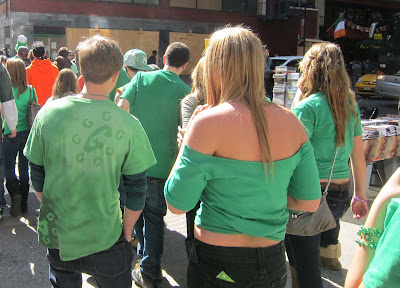 Mostly hammered high school kids. I assume their parents think of them as 'best friends' which explains why they're wandering around Manhattan drunk when they're 16. My dad didn't tell me he liked me as a friend until I was 44. 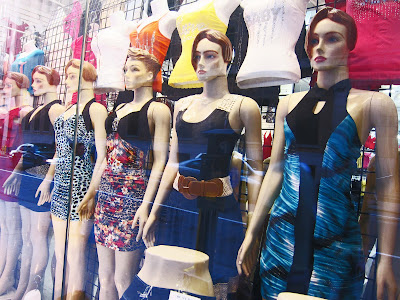 Many garment buildings included space for ground level retail. These mannequins were far more animated than the high school kids. 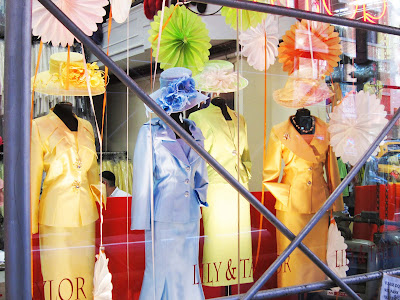 There's a huge variety -- Some of it I don't understand 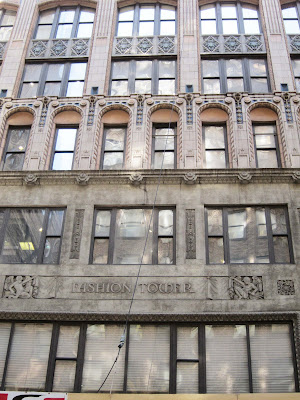 The Fashion Tower located at 135 West 36th Street is the only building with details unique to apparel. 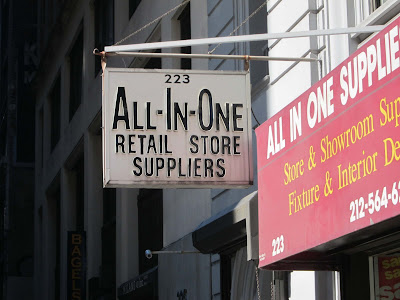 Most of the retailers serve the trade. I have a buddy who found Tiffany blue boxes in one of these stores and uses them...Never mind. 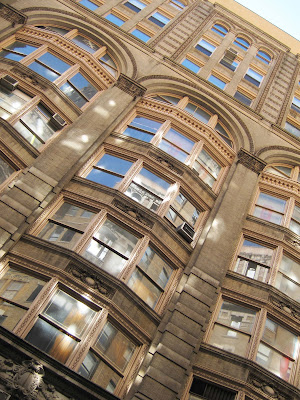 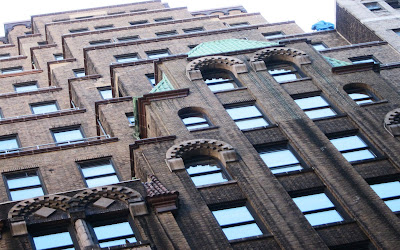 So is 225 West 34th. Fair warning...staring up at these buildings can get you run over by any number of push carts coming down the sidewalk. They're still around. 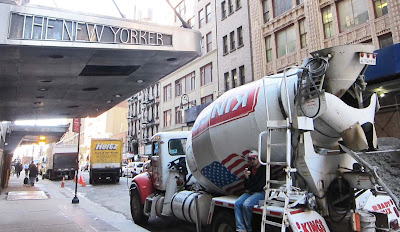 Hotels housed the buyers in the day. Right out their hotel door they could visit a huge array of manufacturers while saving time and shoe leather.

The '20s and '30s are everywhere in the district. And not a spec of it is phony. That's the amazing thing. 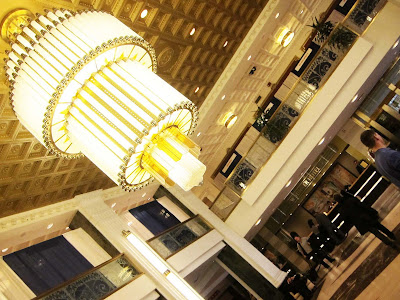 You just have to know what you're looking for... 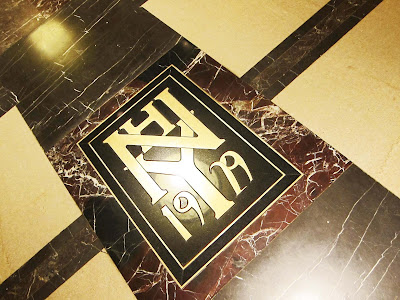 and where to find it. 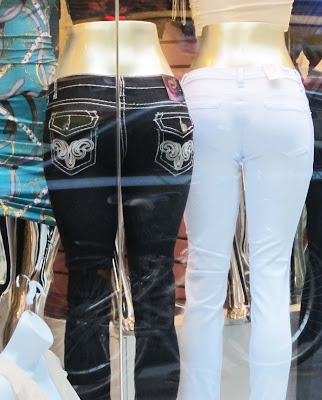 I love it down here.

ah, the New Yorker. Beautiful old hotel, riddled with bedbugs, owned by the Unification Church. Probably wouldn't stay there if I were you.

Your photography is wonderful!

Thanks for the tour of those wonderful buildings. That they all haven't been converted years ago is astounding.

"I assume their parents think of them as 'best friends' which explains why they're wandering around Manhattan drunk when they're 16. My dad didn't tell me he liked me as a friend until I was 44." -- BRILLIANT.

And couldya dig the fashion on those kids? Yeesh.

Why do parents feel obliged to think of their kids as friends? Who sold them on that line?

Kids drain your money, time and your relationship...WORSE they're thankless! Send them off to boarding school. Costs too much, you think? Believe me, you'll save in the end. The draft was good for beating discipline into thier heads at no charge. Why not bring it back?

I was in my mid forties when my father said something similiar. But then when he was passing away he admitted he couldn't stand me. He told me he never liked the fact I had better taste in clothes. He was great.

Girls are different. And we have to resist the temptation to be a friend. Now I know.

Thanks for the tour. I'm a West Coaster that has never been in NYC, so thanks again!

Thank you. Wonderful peek into that world...And your thoughts on the pathetic need parents today have to be "friends" with their offspring is dead on. If your kids don't tell you they hate you at some point between 13 & 19, you're not doing your job.

Your old man actually told you that he liked you as a friend at 44? What kind of new age, touchy-feely, hippy dippy household was he running?

Just kidding, I am sure there is plenty of middle ground from being "friends" with your kids to the upbringing that many of us had.

Hammered kids. Dig the fashion on them. Boy the pomposity meter is jumping today. Kids dress crazily and do stupid things. It's to be expected. You just hope not too stupid.

It was very popular to skip school on St. Paddy's day in 1970s Ridgewood NJ. I never did. The teachers like giving pop quizes in honor of the patron saint of the ould sod. Most did not get bombed, maybe a little buzzed.
It's tough to fill out your Harvard application when bombed.
Manhattan seems so different.
In 1978 you felt like you were in a Lou Reed song. I remember walking through Battery Park. The drug dealers would swarm around like llamas at a petting zoo. Yuck.

Love this post! I also particularly love the facades of 260 West 35th Street and 225 West 34th... I may have to venture down there.

March 25th is the 100th anniversary of the Triangle fire.

Tin Tin,
When you mentioned the filthy windows I was reminded of accounts of the factory.

I remember learning about the Triangle Fire in school, so haunting, those girls locked up in that building.

I wandered around Manhattan drunk in high school one St. Pats, but the drinking age was 16....oh wait, no it wasn't, oops.