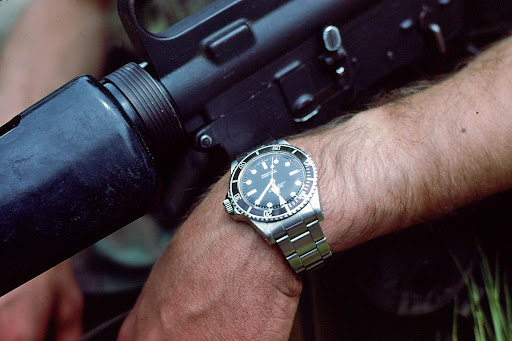 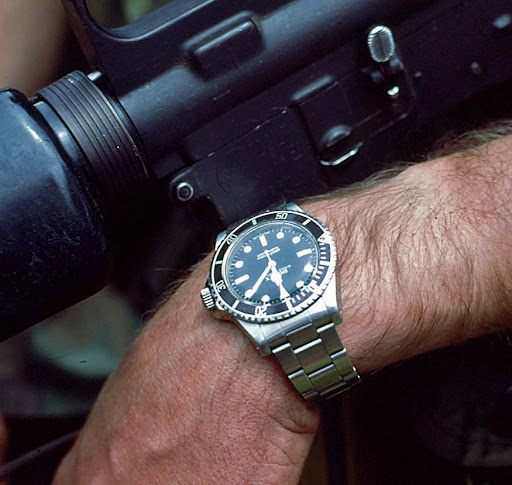 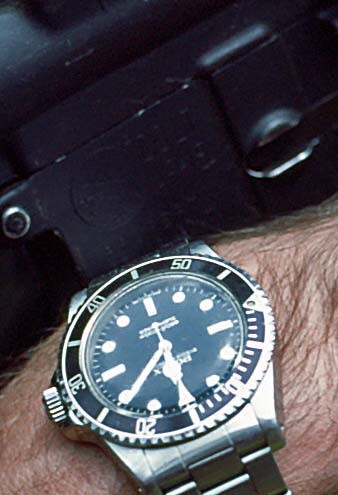 "This is my rifle. This is my gun. This one's for shooting. This one's for fun."
Pardon me while I dig through old boxes of slides but I'm amazed how well they scan. These were taken in the army. That's not me but it's my watch. I had all the instincts of Madison Avenue as a buck sergeant. I shot these with a P.X. purchased Olympus OM-1. Sgt. Murphy was the model and while I thought I was too creative for the army - - Sgt. Murphy was an artist.
As sergeants we carried .45s in the field. Problem was they were a pain to clean after 30 days in the woods. Depending on how big a jerk the guy running the arm's room was - you could spend a life time cleaning the damned thing before it ever passed inspection. This caused great anxiety because all you wanted to do was get a hot shower, change into civies and head into town for lemonade and cookies at the Methodist church social.
Almost everybody wrappped their .45's in OD green plastic and stuffed them in the holster. We were playing war in the woods of North Carolina so no one really cared. Murphy had a brilliant idea that. It involved the purchase of a Daisy BB gun from K Mart ($19.99) that was a dead ringer for a real .45. We'd wrap it in the same OD plastic and no one was the wiser. Plus, we had he added enjoyment of shooting at each other with BB's or playing darts with a board we took to the field (the Daisy fired pellets and darts as well as bbs).
When we got back to the barracks after the exercise we'd run up to our rooms, unlock our lockers, take the real .45 out and swap it for the BB gun. Run downstairs and turn it in while the arm's room guy wondered how it had been kept so clean - or was cleaned so fast. Like I said, Murphy was an artist. God, I hope men like him are in the army today.
Tomorrow - Murphy's Law: The Tank
Posted by tintin at 09:37

Nice watch. Nice Photo and nice story. That's a M16A1 though, ain't it?

You might call it Murphy's Law (Anything that can go wrong will go wrong.). And he wisely used it to his advantage.

Colt 45s were notorious for jamming and malfunctioning. My father found one "in theater" in Korea and stuck it in his ammo belt. While instructing troops he put his hands on his hips and...it fired. The round split the heel of his boot. He said that had he not been so thin it would have shot his a** off. I liked field stripping them though because they were sort of like a Chinese puzzle.

That Sub is probably the only big metal watch I'd ever wear. Like a 1960s Corvette Stingray, it's just iconic.

You'll shoot your eye out.

That may be a Colt but it's certainly not a .45

Tintin are you still a shooter?

And more importantly, is an AK Trad ?

I wish I'd shot nothing but Kodachrome back in the day. Somehow I lacked the imagination to foresee high resolution scanners.

ME- He was partial to Browning (12 gauge and 9mm auto). I remember really pissing your father off when I showed him how to break down his Mini Ruger rifle. He had bought it from a Bubba of his and there were no instructions.

DB- For some unknown I'm pretty good with the .45 but can't hit a barn with 9mm. The Browning Hi Power auto 9mm is the best looking auto I've ever seen. But I'm so much better with a Colt. I like Murphy's law. I'm changing the title due to the confusion.

Jimmy- Yes, a bb gun in the army. WE were primed and ready for WW III.

KA Adams- The M14 is J Press. The M16 is Brook's Bros and the AKM is Men's Warehouse. I'd add the Swedish K is Orvis.

LWing- I shot 5.56 but always preferred 7.62. I do have a lotta Ektachrome in the archives but it doesn't stand up to the kodachrome.

A really great post. I think there is a Murphy in every army in every era. At least I hope so.

Good story as usual. I'm a lifelong civilian, is it a smart idea to wear a big shiny watch into the field?

What kind of watch is that?

M Lane- I think you may be right. The environment breeds it.

Nick - It is when you're armed with a Daisy BB gun and you're fighting a war outside Ashville, NC. Rolex Subs and Explorers were (still?) very popular with military units world wide.

Same was being done as late as 2001. We used hard plastic replicas of 9mms...well worth the price. E-5s with pistols, that's ridiculous! I had a hard time getting one as an O-3!

Foster- It was fun playing darts.

Essex- What can I say other than corps headquarters. I was a lucky mo-fo.

Tin-tin's phred/dad
RE: Various weapons:
On Field Exercises I usually carried a Colt Woodsman .22 caliber semi-auto pistol. In a plastic bag, stuffed in an issue GI holster, it was undetected. It was good for picking off turkey, quail, pheasant, etc., and jazzing up the menu a bit while playing war games. Same pistol was used in VN, with rat shot, to get rid of rats, monkeys and other critters.
In combat areas, I carried an issue .45 cal M-1911 pistol and M-16 rifle. (When your ammo resupply is standard issue just kicked out of a 1st Cav chopper, you can't be picky -- safer to use what they do.)
At times, I also carried a Browning high-power 9mm auto pistol. Didn't like it: too bulky and underpowered.
My VN body guard/gun bearer carried his rifle plus my 12-gauge shotgun and 40mm grenade launcher. Felt sorry for him carrying all that junk but later found he felt good to be so well armed. So it goes....

Dad, I remember the Woodsman. I had no idea their value had soared. A nice little .22 that won't break the bank on the range.

I remember the ammo for that S&W Model 19 was terribly expensive. I think all I ever shot out of it were wad cutters that came 50 to a bag.

Hi - Found a link to your blog on ChapelHillMemories.com and have had a blast reading through this! Talk about degrees of separation! I grew up in Chapel Hill (CHHS'71) and joined the Army (74-76) and was stationed at Ft. Bragg (I know, join the Army and see the world...) I was a field radio operator (Morse code) in 1st MI Bn (Aerial Recon support) and my ex was in 5th SF, my dear friend was married to a medic with 7th SF. After returning to UNC for Nursing School, one day I decided to become a Helicopter Pilot instead, and after graduation from Embry-Riddle and was commissioned and was an Instructor Pilot at Ft. Rucker for 6 years. And yes, being both enlisted and an officer - WOW what a difference. Being an Army IP gave me enough flight hours to land my first civilian job, flying in the Northeast corridor (Boston to Washington), out of NYC…at Lincoln Harbor, in Weehawken, NJ, right at the Lincoln Tunnel (across the Hudson from West 40th St Heliport) where I have flown around Lady Liberty a zillion times. And over Governors and Ellis Island. Parallel Lives…
I have one story for you pertaining to weapons and Field Training exercises. Somewhere in the bowels of the Ft Bragg sand hills, we were out for an FTX to get prepared for “Gallant Shield 76”. Our “Top” was Coley Davis, one hell of a SGT! But in the middle of the night, during a simulated fire fight, we came out of our GP small tent for the third time that night, running into the pines. Me, without my M-16. I knew that a soldier NEVER goes ANYWHERE without your gun, oh I mean, weapon. Here comes Top! I’m in deep Kimchee! So I reach down, grab a big pine branch, strip off the limbs and hold it up to my shoulder, and his eyes saw what was supposed to be there. What a save.
During college, our ROTC unit had our Summer Camp at Bragg. And as the Cadet Commandant as a senior, I found many underclass-lings without their weapon on our many FTXs.
As a 2LT, I stopped by Ft. Bragg on my way to Ft. Eustis and saw Top and related my sin. He just laughed and saluted me as I drove off. He sure did make me pick up a lot of cigarette butts in my time at Bragg.

Trish- I usually get russian spam on old posts so it was so refreshing to see your comment was not only legite but so interesting. While my memory is hazy on the many company commanders I had during my brief four years -- for some reason I remember all the SGMs I had. Thank you for your wonderful comment! And you may well have run into Sgt. Murphy at Ft Rucker. I think he went through in the fall of 1980.