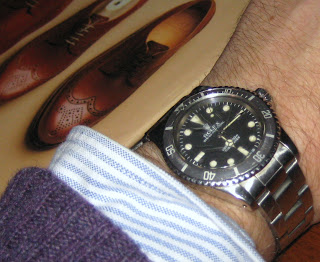 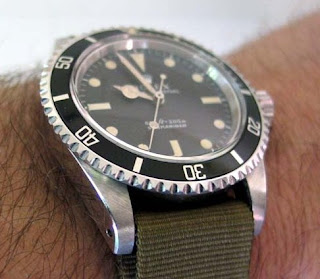 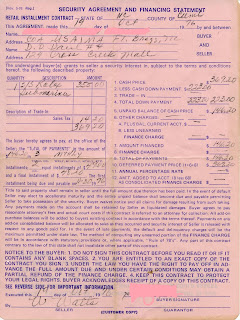 Michael Williams of a "A Continous Lean"turns 30 today. I was thinking that my watch and perhaps some of my boxer shorts are older than he is. I bought my Sub, like so many others, while I was in the Army. It was required if you were in Special Forces. The Sub was cheap back then. I would'a sprung for the Explorer but it was on the high side. I think $50 or $75 more. Trad Dad paid $225 for his Explorer in 1967 while serving in Vietnam with 5th Special Forces Group. A few years ago he admitted to getting pissed off with his watch, taking it off his wrist and slinging it out into the middle of the New Mexico desert. So much for my inheritance.

I've owned two Subs. The first one was left in a Hardee's bathroom in Fayettville, NC after helping an Army buddy change a motorcyle chain in the restaurant's parking lot. I took it off to wash my hands and left it in the soap dish. Didn't notice until I got back to my barracks. I had this very odd feeling in my stomach just before I had the desire to kill myself. I lied to Trad Dad and told him I lost it on a night jump over St Mere Eglise Drop Zone at Ft Bragg.

A couple of days ago I was in Bergdorf Goodman and saw a Sub just like mine (model1530) and a Explorer like Dads. The Sub was $10,000 and the Explorer was $12,500 or there abouts. I know my Dad reads this blog from time to time and I can only hope he isn't feeling that stange feeling in his stomach. Jeez, you couldn't do better in stocks or real estate.

PS- The middle photo is a Sub like mine but not mine. I've added a photo of mine and am ashamed to say it's overdue for a servicing. It's had four services in the 33 years I've owned it. The book is "Handmade Shoes for Men" by Laslo Vass. I'm not a fan of what I believe to be a heavy Hungarian style but the book is mindblowing.
Posted by tintin at 18:21

What I said about Abercrombie & Fitch a few posts ago, I could say about Timberland (isn't there a rapper named Timbaland), and also Rolex. You're not secretly making the rounds of Trad icons co-opted by gangstas, are you?

Absolutely beautiful Sub, from when it was universally recognized as the "Deadliest looking watch ever made". No chrome rings around the indices, no crown guard, and little in the way of superfluous writing on the dial. And best of all: no date.

That is one fine piece.

That is one fine timepiece. ENJOY!If you were a girl, this purchase would be worthy of a "Life of a Southern Belle" award!! VERY impressive!

Nothing beats a Rolex on a non-metal band. My old boss had one on a worn brown leather band that his wife (then girlfriend) bought for him in 1964. He was a great bass, but I would have killed him for that watch.

These days I don't wear a watch. I figure you either have a Rolex, or else rely on public clocks. No in between.

Incidentally, your Rolex is a month and a half older than I am. Good work.

Seriously, with the state of the economy the way it is buying expensive watches is the only way to invest these days :)

The birthday was grand! So fun!!

I'm sure that in a few years I'm going to regret getting rid of my Sea-Dweller.

Beautiful watch. I enjoy my Sub and Datejust.

I would have given anything to have one back in '76! But alas, I was hot for an SLR camera.

Before it became just a watch in which to put James Bond-type spy items, a Rolex WAS a James Bond spy item. Rent "Dr. No" and see for yourself. -DB

Let me mention that this very watch survived a nasty little motorcycle accident in the
early 80's. The watch got the better end of that deal!
Amazing how good it looks today. ME

Ben- Now that you mention it - - I was a big fan of Courvoisier VSOP while in the Army. Took it on field exercises in the winter.

Belle- Thank you and you gave me a great idea. Life long purchases. Things you never have to replace. In this world of J Crew, Ikea, Gap crap stuff it's a novel approach to life and a break to the dump.

Giuseppe- Sorry. That wasn't my watch with the OD green band. Although, the stainless steel bands are a major pain. The one my Sub (the 2nd one) came with was a huge piece of crap that I paid $75 for the expandable divers band.

At one point in college I was too poor and wrapped black electrical tape on a link for a fix that lasted three years.

Porter- Great meeting you and your sis. Hope you guys had a great night. Long live Norway and girls from the midwest.

Tucker- The one you complimneted for it's patina was not mine - - although I like the patina on mine.

It endured numerous jumps from planes, the Panama jungle, diving certifcation, 20 hours in a Piper Tomahawk, two auto accidents, one motorcycle accident, a drunken night with James Crumley and most recently a drunken bashing competiton with a Seiko. Like I said, 33 years...I could never let it go. Unless it doubles in value. As Pike Bishop said, "$20,000 cuts a lot of family ties."

LBT- Congrats on your recent wedding and welcome back. Get to work on that Surf Trad blog.

Anon-DB, Atlanta bound soon. You know it was you and that Rothman's cigarette ad ('77?)you sent me from Europe that made me, MADE ME! go out and buy another Sub. Remember? The close up of a Sub on a Tuxedo'ed wrist shifting with the left hand a Jaguar manual? Man, would I love to find that ad.

Anon-ME, I'll always have fond memories of that motorcycle accident. I don't think the watch ever stopped ticking despite the sumersault over the car roof and hood. I can't drive by O'Steens without looking for the spot.

Anon- They tell me the old ones are much more valuable than the new ones. Instant patina I guess.

What a wonderful post, especially the visual aids! The credit agreement is a stitch. When it comes to a wristwatch, the old "We have seen the enemy..." most assuredly applies to yours truly.

The Hardee's story and concerns about your Dad reading this also hit home. In our case it was the strand of pearls and my Mother.

Hope the week ahead is stellar,
tp

A Great watch and hey! Where did you get those long lasting boxers? My $10.00 Hanes are dropping after two years wear...dammit..Cheers, Homer.

This was forwarded from Mrs. E. . Might be my new plan since I overhauled the Datejust....

Based on the above, the best current investment advice is to drink heavily and recycle.