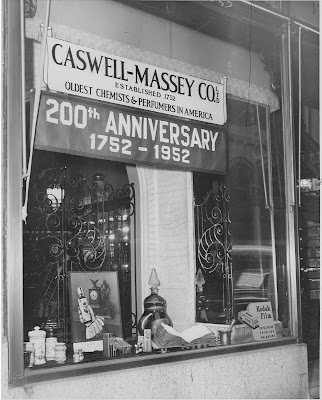 Started in Newport, Rhode Island in 1752 by Scottish pharmacist, Dr. William Hunter. Now this isn't some company that went outta business in 1857 and was started back up in 1976 by some cretin Wall Streeter who was marketing ersatz heritage. Caswell - Massey has been going non stop since 1752.

Hunter sold drugs and imported perfume to the 18th century version of today's high-net-worth. He also mixed his own scents and numbered them one to twenty which is where the No. 6 comes from. I tried to draw a cartoon of me asking George Washington for a bar of soap in an army barracks shower but it didn't turn out so hot.

Washington was a fan of No. 6 but I don't know if he knew Dr Hunter was loyalist. Not that it made much difference. Hunter died in 1777 while treating British soldiers. After the end of the war Hunter's wife transferred ownership of the shop to an employee and the loyalist connection was lost to history.

Caswell - Massey opened their first NYC store in 1833 and operated as a pharmacy as late as 1990 in their current location. Sadly, they are departing the current location after 84 years. Word is a bank is going in their old space. Well, NYC certainly needs more banks and the Intercontinental Hotel needs more rent dollars. If you want to see this remarkable space you better hurry. 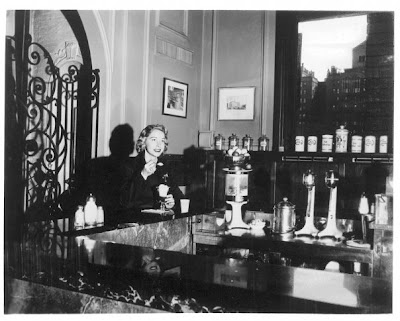 The soda fountain removed sometime in the 1950's.
Upon entering the store, you can still see a discoloration of the tile floor where the stools were. This is where a 19 year old Lauren Bacall insisted upon meeting Humphrey Bogart (45) for the first time before they made the 1945 picture, 'To Have and Have Not.' Apparently Bacall felt safer in a soda fountain with Bogart. Soon you'll be able to use an ATM on this very spot. 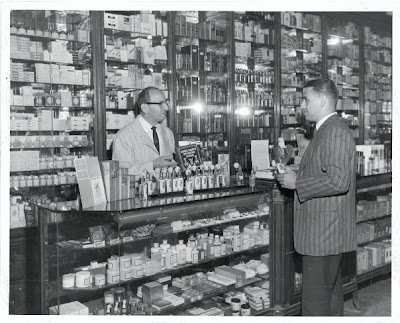 I swear the man behind the counter looks like Leonard Rossiter.
These B&W photos are from the archives of Caswell - Massey. I'll go into further detail about my visit there tomorrow but wonderful people. You'd have thought they'd throw me a sample or two. But who needs samples at these prices?

Caswell - Massey was never much for advertising. The marketing was mostly word of mouth and some very famous folks enjoyed just stopping in. Of course, I always enjoy just stopping into a bank.
It is nice to know I share the "I didn't buy anything" guilt trait with Greta Garbo. Every time she stopped in Caswell - Massey on one of her long walks she felt guilty if she didn't buy anything and would always purchase a tortoise shell comb. I know just how she felt. 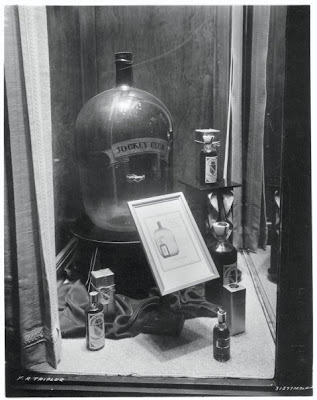 John F. Kennedy's favorite cologne was Jockey Club. It's an intense scent that's very masculine. Both Canoe (1935) and Old Spice (1938) were originally formulated for women with Old Spice being tweaked for men by some added citrus - - but you could learn that at any bank.
Tomorrow: Your Caswell - Massey - New Stuff & New Digs
Posted by tintin at 16:44

Read somewhere long ago that Jack Dempsey was at the main store or factory, and told them he always wore their Red Jasmine. Nobody was about to tell him it was marketed as a women's scent only, and they quickly got out a Red Jasmine men's cologne

I was just there the other day on a day trip to NYC. Wonder what will happen to those beautiful wooden built-in cabinets?

....Speaking of Leonard Rossiter, and yes he does, I lived in Britain for awhile in the 70's when he appeared in an hilarious whimsical comedy series as an ice cream salesman so maybe it is him.......Rossiter's finest hour has to be as the cowardly strutting army captain in Barry Lyndon.

NC Jack- It's a great looking bottle. We'll have a lot of bottles posted later today.

Charlotte - They're not staying - That much I know.

Old Tweed- You can't learn this stuff in a bank. I swear, the shop should be made an Historical Landmark. It should be a site within the National Park Service based on some of the "historical' homes of unknown vice presidents.

I think I've watched B Lyndon at least 100 times and quote it often though the quotes never seem to go over very well.

tintin: Reggie Perrin and his boss "CJ"....he was also in another very funny series called Rising Damp where he was a seedy landlord.....I love Lyndon too....one of my favorite movies along with The Third Man, Lawrence, Double Indemnity, The Prisoner of Zenda (1937 version), Yellow Ribbon and The Cruel Sea....Most people simply don't understand Lyndon

This is a wonderful series of posts. Great work.

Too bad we can't get real tortoise shell anymore--well, not in America, anyway.

Seems there ought to be some way to farm them... but what to do with the meat? I can just see it now: a national chain of tortoise soup restaurants. "Mr. Turkle's Tortoise Soup--now with 10% more meat!"

I miss the store already--and I've never even been to it!