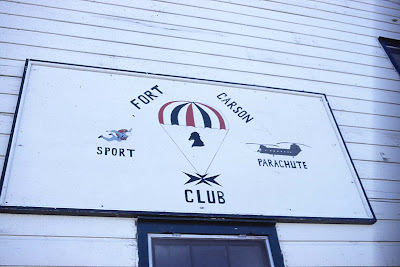 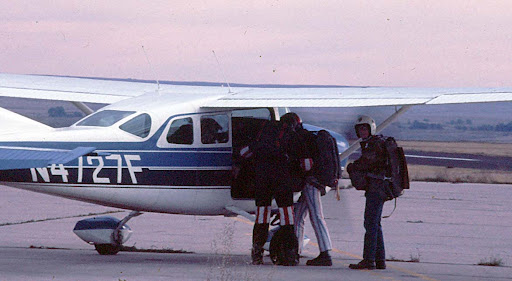 The club used this Cessna and a U6A Beaver 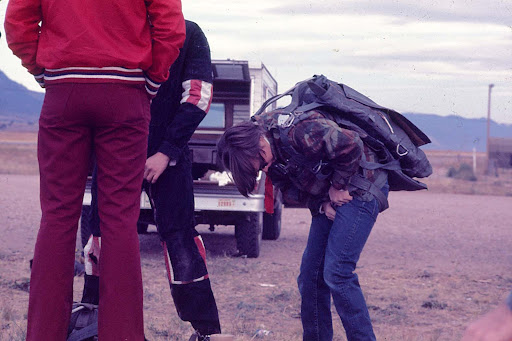 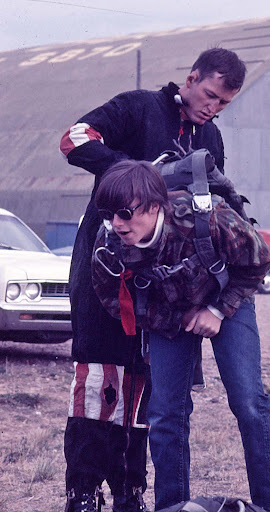 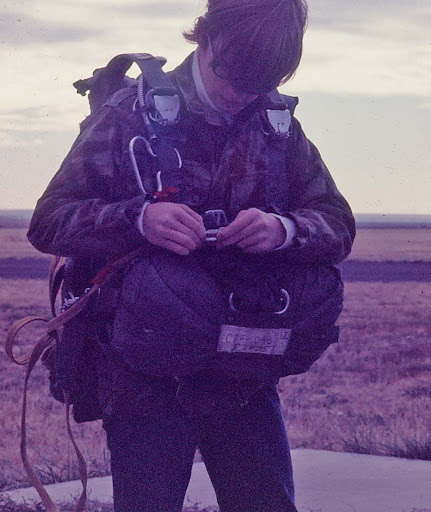 Checking to see who packed the reserve 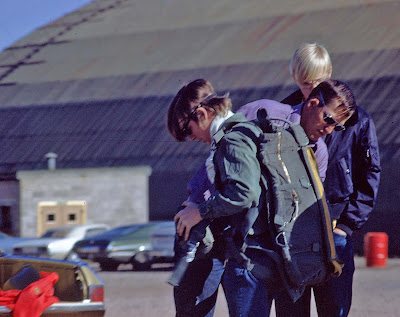 Gordie checks me for the second jump 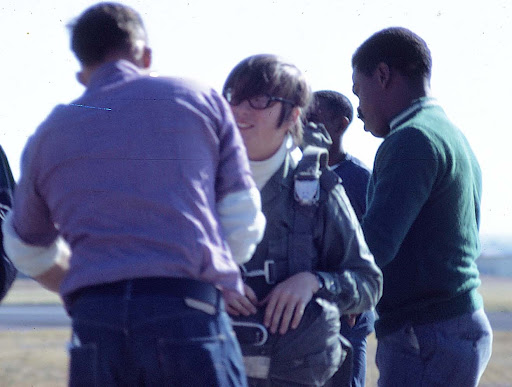 Gordie's giving me instructions or he's telling me about a nurse 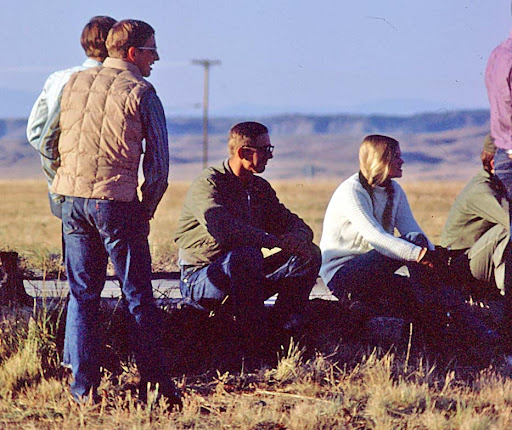 Classmates waiting their turn
When I turned 16, I was old enough to drive and jump out of a plane. Because I failed driver's ed the first go around (I'm proof it's possible) I would jump before driving. I remember the first was the easiest. Mostly because you have no idea what it's like. The following jumps (when you know what it's like) are much harder.
These were taken by my father (w/a Topcon Super RE) and this is what it took to get his attention. Gordie was my jump master. He had spent considerable time in a hospital for severe burns from napalm in Vietnam. He had not been out long when these photos were taken. Gordie would tell wonderful stories about having sex with the nurses. At 16 and still a virgin - Gordie was my hero.
I had it in my head that if I jumped from a plane - - I would finally lose my virginity. You know? Having sacrificed life and limb - I would've earned it. I'm last in line loading into the Cessna. The others were making a very rare 60 second delay at 12,500 feet. They were dumping me at 3,000 with my static line.
Just as Gordie loaded me on the plane, this very attractive army nurse who was in the club, I think she was a 1st lieutenant, approached us and yelled over the engine noise, "I'll take any one of you behind the hangar and give you the best sex of your life if you don't go on this jump." She said it a little more direct than that but you get the idea. I certainly did and pushed myself out of the plane and headed to her only stopping when she pointed at me and said, "Anyone but you." I wish I had pictures of that. By the way, none of the guys jumping at twelve five took her up on the offer.
That camouflage jacket was loaned to me by my father. A rare French Foreign Legion Para Jacket he picked up in Vietnam. I loved that thing. I was 40 before he gifted it to me. I took my father's sterling silver jump wings on my first jump and three years later he pinned the same wings on my uniform when I graduated from army jump school at Ft Benning.
After winter, I made a few more jumps with the Carson club and in the Spring I jumped with a club in Littleton, CO. To be honest - I could live without it. The jumping that is. But I sure would like to hear Gordie's stories again.
Posted by tintin at 11:55

I sort of had a similar experience, except the foxy nurse said "I was hoping it would be you". That was when I was 13.

There's something about nurses.

I cannot get over the clarity of those photos, they are so beautifully clear. As for the lieutenant, might have saved you a gift that kept on giving.

What a cool cat! Great story and photos, as usual. I'm imagining the army nurse as looking a little like Loretta Swit. (Aside: Did you know that Angie Dickinson auditioned for Hot Lips/Loretta's part in MASH?!) Anyway, I could never jump out of a Cessna - too scary - so, like the fondue thing, this is another experience I'll enjoy through you.

Sean- You had me going.

At 16, I could've cared less what she had. I was on a schedule to lose something and I was running (according to my peers) very late.

ME- The old man wasn't too shabby.

Cathleen- Never a fan of Loretta. BIG fan of Angies.

I never knew - or forgot - you jumped at 16. You looked such the teen stud. Kinda surprised that the old man allowed the hair. Yep, I'd wear that parachute honor on my face around the gals if I had the confidence. Which I didn't. So it's moot.

Did get my SCUBA certification at 17, though.

A perfect combination: skydiving, sex, French Foreign Legion, Africa, and sunglasses. Does it get any better than that?

"...and three years later he pinned the same wings on my uniform when I graduated from army jump school at Ft Benning..."

I'd pay money to have a father-son memory like that.

ADG- That was a very interesting day. I'll have to tell you the story sometime.