Off My Back: The Shirt With Everything But The Girl 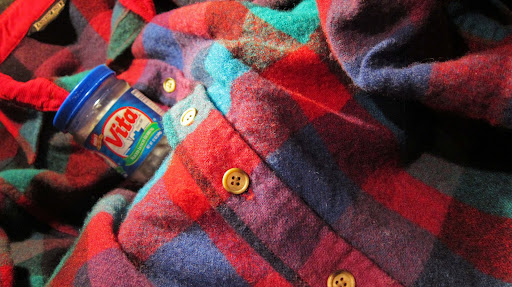 It's not Ralph Lauren 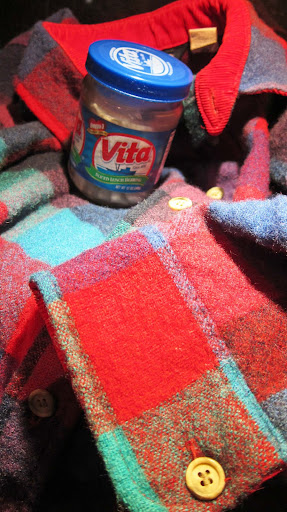 It's not LL Bean. 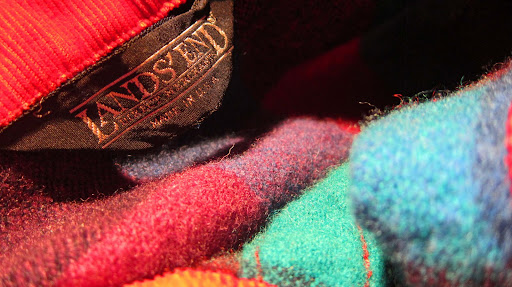 It's vintage 80's Lands' End - Made in USA
"They're such beautiful shirts." Daisy
The Great Gatsby
At 80% wool 15% nylon 5% corduroy, I doubt Daisy Buchanan would give this shirt a second glance but it has enjoyed more female compliments in midtown Manhattan than any suit, Hermes tie or Turnbull & Asser shirt I own. It's beautiful, comfortable, humble and perfect for eating Herring.
I loved Land's End. In college they made the Cacafuego shirts for my dorm boat. I also owned their wet weather gear. Amazing quality for the price. Lands' End was the poor man's LL Bean in 1984 and I was a very poor man.
In the 90's, I was working in Chicago and was a fan of the Lands' End Hyde Park shirt. A heavy oxford that after a few washings starched up thick like card board. As I made a little more money the idea of spending $20 for a dress shirt seemed unwise. Probably because I didn't have children.
I tried Brooks Brothers, J. Press, Britches of Georgetown and Polo. Then a steep climb to the ampersands on Jermyn Street, Turnbull & Asser - Harvie & Hudson - Hilditch & Key. Stripes, gingham, brushed twill, broadcloth and candy stripe batiste.
Casual Fridays in the late 90's turned into casual everyday by 2002 and those ampersands didn't cut the sartorial mustard with chinos. They were Grey Poupon and I needed French's. I ventured into Sears to look at the Land's End department for my old friend, the Hyde Park. Good looking from a distance but not so much up close. Paper thin and a plastic feel to the cotton. Had Hyde turned into Jekyll or had I been in the tall cotton for too long?
But I have this simple Lands' End shirt from the mid-80's. Something special and today - very unique. Over the years the wool has turned as soft as Tracy Thorn's voice and I like to eat Herring when I wear it.

Labels: EBTG, Lands' End, Music, Off My Back

That is the power of a great garment. It captures a time and place and carries it forward in a grand way.

Herring, eh? Fantastic stuff. I prefer the pickled but the creamed will do. Just the thing for my Norse tastes on a cold day and certain to disgust my Irish wife.

I was so sidetracked thinking of herring that I forgot to say this was a great post re Lands End. It was one of my favorites too. All my dress shirts when I first started working were Hyde Park.

I find these posts highly educational. Your descriptions are brilliant!

Another great song! You have British music tastes. . . Or did people actually listen to Everything but the Girl in America back in the 80s? I really like pre-EBTG Tracey Thorn in Marine Girls, and especially the Plain Sailing single.

M Lane- Herring. Sardines. Smoked salmon. They all put me in a good place. Someone should start a fast food franchise for smoked fish. I love it all - except for that Whitefish. Can't handle that.

Alice- Thanks. Just wait for the Meyers of Keswick post next week. Although you won't learn anything -the Yanks will.

Scott- Actually, I'm all over the board. But I love the UK stuff and it reminds me of working in London. Pet Shop Boys. ABC. The Specials. The Jam. Style Council. I have a Thorn's, Distant Shore on vinyl. Haven't listened to it in years. I gotta get turntable.

Nice shirt. I like it. It's the sort of shirt I'd wear to the beach on a windy day in winter.

I'm also partial to LE. As I remember it, among the crowd I knew back in the 1980s, Bean was considered too self-consciously preppy, apart from a few special items such as the Norwegian sweater, duck boots, and field coat, so LE came to provide the everyday workhorse items (khakis, OCBDs, socks, polos, etc,). This was true for young students as well as Ivy-educated executives (I'm thinking of a few local families I knew at the time in CT).

A nice shirt for eating herring or cutting trees down.....for the office....naaah....although I can see why people compliment you on it.....the comments about LE in the 80's are on the money.......I'm looking forward to the piece on Myers....I'm addicted to their sausages

Ahh, Tracy Thorne. Thank you for that. Had the great good fortune to see EBTG about ten years back.

Tintin, you must listen to this, my favorite. I still regret not requesting it at the concert:

nice i recently came across an amazing old made in america Lands End rugby with perfect color and stripes... that old stuff was definitely quality

I remember purchasing polo shirts at the LE outlet in Schaumburg back in the 80s. I don't believe ever purchasing a Hyde Park shirt back then. I do have a current Hyde Park and am very pleased with the quality for the price. LE polos are also a great value at $19.50. Glad to see Sears expanding the LE presence in their stores.

who cares what sears does with land's end, the brand is dead.

with our luck they'll revive some "american sportswear renaissance", "heritage", "authentic", "made in the USA", off shoot that faithfully tries to reproduce what it once had but in the end wind up looking like every other generic revival faux luxury diffusion brand

i hate sounding pessimistic but i've become very cynical as of late about this recession cash in on american clothing. whatever. as long as its made in the USA, I guess.

Mis-read the first paragraph and was under the impression you habitually wear this shirt with an Hermes tie... Wow! Was momentarily very impressed - not even Our Man in Old Town would go that far - give it a try - please!

Fan of both shirt & herring.

My Dad loved Vita Herring "cocktail". I'm a foodie... and I can't bear to even look at it!

Nice shirt, get a girl.

I love Lands End, and still find their quality excellent. It's an easy way for me to get American Trad up in the great white north without gassing up the car and schlepping to Niagara Falls and dealing with eternal waits at the boarder. I finally walked through Brooks Brothers Toronto store - beautiful, but yikes! The prices! I can see how LE might be a disappointment after sampling Jermyn Street's offerings, but a Chevy would be quite a let down after driving an Aston Martin...

Love, love, love EBTG. Hadn't heard this single before, it looks early. Thanks for the memories!

I like LE's current crop of Madras short-sleeved shirts. If you want to wear them untucked, you'll probably have to have them hemmed

Good thing you already got a girl 'cause that shirt's uglier than pootin' in Church.

LBT- LE was very popular in the Florida coastal community where I attended college. Cheap sailing duds kept the locals from hitting their booze budget.

DB- SOS! Loved her hair on the Break Out vid.

Sam- It's amazing to see the difference. I spoke to a rep at Lands' End who did not get back to me in time for this post (and I didn't give him much time) but he admitted that even when the same machines are sent to Mexico you don't get the same quality. Having said that. I'm reminded of the quality of Italian apparel in the 80's vs Made in the US. I wasn't a fan of the Italian look but did appreciate the quality. A shame they never had that in their auto industry.

Nat Shoulder- I had a friend in college from Madison, WI and he always wore LE button downs with other people's monograms. He got 'em for $2 or $3 at the outlet.

1- An awareness of US made and a search to find authentic makers who charge affordable prices.

2- A marketing ploy of hype and bullshit where simple oxfords and chinos are selling for $150 and up.

I have all the time in the world for number 1 and no time at all for number 2. This has nothing to do with going to the bathroom.

Anon English Femme-I suspect he's the only thing left in his house that he hasn't had his on-retainer framer frame. But I love him like a brother.

TRVS- There may be a future a marketing tie in I'm not aware of.

Paul- It's an aquired taste. Try it with gin...Gin makes everything taste good.

Nice shirt, brilliant song. I've been a huge fan of EBTG since a friend of mine played me their first U.S. release in 1986. And Tracey is witty these days on Facebook. One thing you do see in that video: her lifelong loathing of lip-synching. She wasn't even trying.

I find Lands' End's quality still high. For basic oxfords and chinos you won't do much better, especially for the price. And among even more basic basics, I'm partial to their boxer briefs and undershirts.

John J- I've always admired the intelligence of EBTG not to mention Tracey's voice. The impatience with the BS is just all the more reason to love 'em.

I would hope that LE could source a better cotton but it is what it is. And that's not to say it doesn't have a market. But I've been spoiled and not really by the expensive stuff. But the US made, oxford with the right collar roll is gonna set me back $80 and I can live that. I don't need more shirts. I need better shirts.