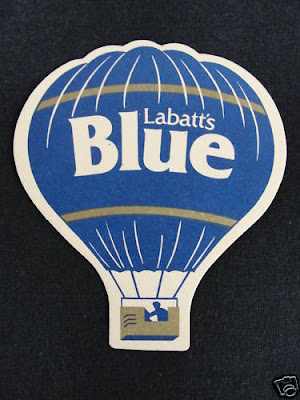 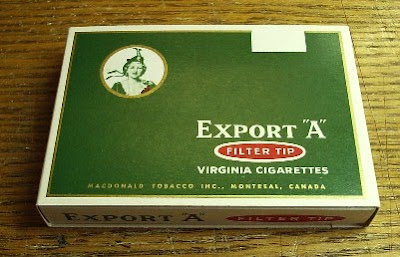 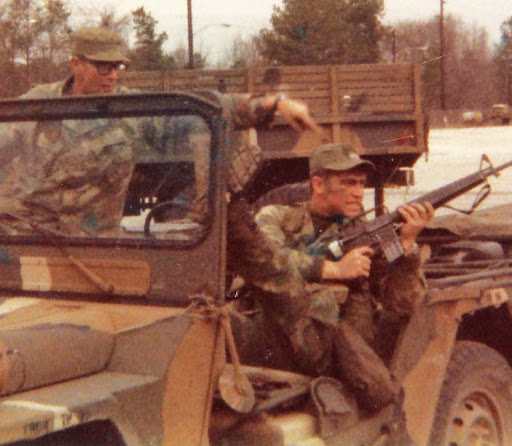 Big John & Tintin - 1980
My last year in the army was a joyous one for many reasons -- the biggest being the count down to getting out. I would spend hours in the main library on post going through issues of Advertising Age and pondering a civilian career as an ad man (or better, photographer) on Madison Avenue. I told my army superiors that I was going to college, ROTC and would be back with a commission in four years. I half believed it myself.
My immediate superior was a master sergeant (P) who had been a Golden Knight and a Green Beret in Vietnam. Big John was also a very tall Canadian. He invited me to his home to meet his wife and his children and we all became good friends. A few years earlier I had gone through Canadian jump school and was forever spoiled by the people. Their good humor, kindness, and love of beer, cigarettes and SCTV bonded me to the Great White North. For years afterward, I would search out Labatt's Blue and Export A's buying great quantities of both whenever I could find them.
A brigade or a battalion, I can't remember which, of the Canadian Army came to Bragg and after a joint exercise a hockey game was held at the Cleland ice rink between the Canadians and the US Army. Something that still goes on to this day as seen here. Big John was a referee and I attended the game with some Canadians I had gone through jump school with back in Edmonton.
Standing and cheering on the Canadian side in a US Army uniform was interesting. Lots of back slapping from the Canadians. Lots of US soldiers shouting at me from across the ice, "Fucking traitor!" I'm sketchy about what happened after the game.
But with CinemaScope clarity I remember the Canadians winning and Big John skating over. He stopped in front of me kicking up some ice from his skates and I saw the sweat pouring down his face. "Here," he held his hand over the barrier and smiled at me, "...take this." and he dropped the game puck in my hand.
It meant everything to me then and even more today. Sadly, the puck is long gone for reasons I'll never forget but unimportant today because I have that memory. Last night I smiled as the Canadians scored the winning goal and in my mind I held a game puck one more time.
Posted by tintin at 09:23

SCTV and Labatt's Blue, it doesn't get much more Canadian than that!
A proud moment yesterday for us Canadians, so nice of you to share it with us!
Great post!

I love Canada and my Canadian friends are some of the great people anywhere.

Can't be mad at Sid the Kid, besides, some of that Canadian prowess is what brought the Stanley Cup back to Pittsburgh last year.

I lived in TO for a brief time after college for job training. Lived with a nice crew of Canadian university students - I recall being lifted up by their polite behavior and good humor.

Traitor. I love it. What a great story. But aren't you glad now that you didn't go back for that commission. You're a writer. We really are, down deep, what we are born.

I never understood the 'Canada Love' until now. Thanks!
Whatever happened to your Canadian jump school sweater? ME

Lily- I'm happy for you and Canada - - and I'm rarely happy for an entire country.

M Lane- I found a good place for back bacon next time your in town.

DB- I could be retired. Have PX and Commissary privileges. Free healthcare and dental versus writing?

ME - It shrunk. That was a sweater I swapped with a guy from the 22nd SAS who went thru Canadian jump school with me. It was too small for me when I weighed 135 pounds.

Point taken, I stand corrected. We don't always have to "do" what we "are." I'm used to being with creative types who had the good fortune to make (somewhat of) a living at it. But case in point: I have barely inched above breaking even, and there are many times I wish I'd stuck to the left (analytical) side of my brain and gone into the sciences. Better to "create" on your own time.

Class 6 base stores have their up side, too!