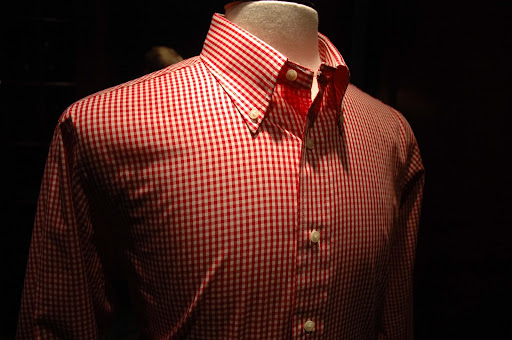 Sayat Nova is an Armenian restaurant in Chicago just east of Michigan Avenue on Ohio. Got that M. Lane? Armenian. I'm a fan of the raw Kibbie but have been known to eat anything put in front of me at this place. It was popular (and cheap) for lunch so my boss liked to take three or four of us for what he called, "a feed."
We'd get there at 11:30 on a Friday and nine times outta ten we'd see Studs Terkel there with his radio producer. And nine times outta ten Studs was in a red gingham shirt, a blue blazer and khakis. And nine times outta ten Studs ordered a martini before lunch. When I saw this gingham in the sample book I thought of Studs.
I also thought of Morley Safer who's a fan of gingham. I saw Mr Safer in a restaurant bar, I think it was the Copper Beech Inn, some 20 years ago. He was by himself sipping a martini and smoking a Marlboro. And he was in a red gingham shirt, blue blazer and khakis.
Hmmm, red gingham and martinis? Seems to be a connection.
It's a shirt best worn without a tie but with a blue blazer and khakis. I decided to skip the popover here and keep it simple. When I wear it this Friday I'll order a dry Beefeater Martini (up) at lunch and think of Morley and Studs as I take the first cold sip. And if someone wants to put a place setting on me that's OK too.
Posted by tintin at 09:02

"I saw Mr Safer in a restaurant bar, I think it was the Copper Beech Inn, some 20 years ago. He was by himself sipping a martini"

.....I've sipped the odd martini in this place myself.....Safer lives up the road in Chester so it's probably still his local watering hole

Your photo is great, but this shirt is just way too loud - like watching "Hee Haw" with the volume all the way up. I would prefer navy or green.

Seriously, I think Roy Clark wore this shirt on Hee Haw in the 70's. Unless you are auditoning for the Buckaroos,I'd pass.
Still love ya though! ME

Loud? This shirt is perfect. It's a shirt that can be worn with just about anything - and can be toned down wonderfully with a solid-ish navy tie (if one is so inclined).

Wear it well, Tin Tin. Don't let a soul tell you it's too loud, because frankly, they're wrong.

I will submit that a trifecta of gingham in red/green/navy is most enticing.

I picked up a red gingham from Press once but haven't really known what to do with it. Until now. Blazer and khakis. I've got those too.

Too loud?.....it's just fine and as Chris points out can be worn with a lot of stuff....I sort of agree with Tintin that it's vividness means that when worn with a blazer it's probably a good idea to skip the tie but that doesn't invalidate the shirt's universality.

Joe - That was my impression. He had a couple and left. No one screwed with him. That's usually the case in nice restauarants.

Cathleen- Hee Haw? I don't see any pearl snaps on this shirt.

ME- Roy Clark? Honey, you watched a lot more of that growing up than I did.

Chris- I gotta yeller one too.

Joe- Right. Although I should keep my red, white and blue Martin gee-tar far away. Anyone have a recent photo of Barbie Benton?

Once again TinTin, well done - you prove to be a man after my own heart. I have two large-pattern gingham dress shirts [spread collared, significantly bolder than the shirt pictured], which I refer to affectionately as "The Morleys." The hold a special place in my heart, right next to Bombay [non-sapphire!] martinis.

The man, and his shirt, in action:

Bold yes, but not too loud.

With regard to Mr. Safer you are spot on. I had noticed his penchant for gingham in the past as well. This photo of him is a sort of official portrait where he clearly shows his tastes. Another good shirt.

Wish you'd not commented on Morley Safer. He was an ass hole in VN and still is.
Gingham shirts? What's going on here? The Little House on the Prairie.

Tintin: love the shirts. I've been mulling going with IAG shirts for awhile, and you've helped me make up my mind. One question, what collar style do yours have? I really like it.

Nige- It's a University collar (3 3/8"). A bit larger collar than standard BD. Better under a sweater.

Mr. Tintin,
Do you recommend J. Press gingham shirts? The one in the photo looks like a Press. I recently purchased a blue one from them.

Anon- The one in the photo is Individualized. A NJ shirt maker who does Made to Measure for Brooks, J Press, Bergdorfs and most likely your local haberdasher. This one was $120. I like Press a lot. Hard to go wrong with anything there unless it doesn't fit. Does it fit?

It is somewhat too broad in the shoulders for my slender build. Perhaps with more laundering it will shrink somewhat over time to fit better.

My J. Press seersucker sport coat arrived last night and I modeled it for a lady friend at home with me currently. She literally freaked out claiming that with the stripes not aligning on the back the quality of the piece has much to be desired. Additionally, I am undecided as to the sleeve length of the coat. It appears to have been shortened too much to accommodate for the brand new shirt I had tried on with it for their tailor. Please kindly advise as to the proper sleeve length and quality to consider in purchasing a seersucker sport coat.

Thank you for your helpful blog.