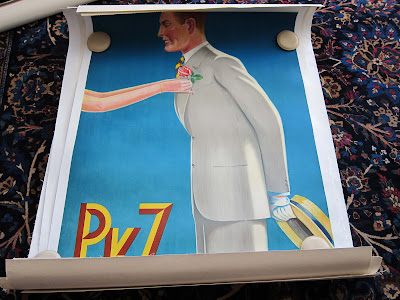 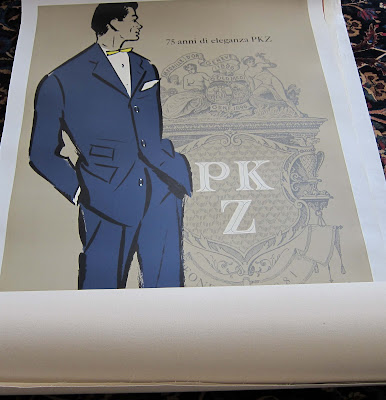 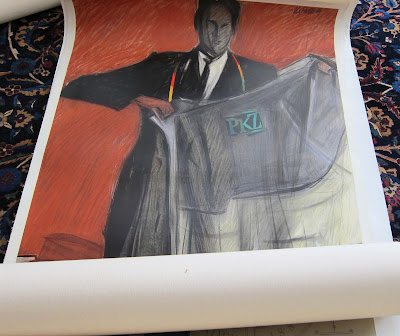 Swiss posters have a certain character to them that's hard to describe. I had a client who spoke fluent Swiss German and she would translate posters I found for sale on the internet. There was a poster for an insurance company of an umbrella leaning against a wall with the copy, " Ist das Ihr einziger Schutz?" She translated, "Is this the only protection you have?" and suggested I hang it over my bed.
PKZ, as I'm sure my client knows, is a clothing store with locations in Switzerland. I don't know beans about 'em but they started off in the late 19th Century and are still in business today. I've always had a thing for their posters but the early 20th Century stuff is north of $10,000 while the more approachable (see above) run between $1,000 to $2,000.
I snagged the middle poster. Not because I liked it but because the Golf Foxtrot did. The top poster was my first pick for the color alone. GF thought it too affected. I liked the bottom poster because there was movement in it. An old art professor told me to always look for movement. She thought it was too retail. And she was right. One like it is hanging in the Ralph Lauren department of Bloomingdales.
So the middle got the nod. Printed in 1956, the ticket pocket and bow tie give it an 'American in Europe' look I've always liked. Is that suit jacket even darted?
Posted by tintin at 06:23

Fluent Swiss? Was she also fluent in Canadian?

Fluent Swiss German which is a unique language to the Swiss and not standard German.

The bottom one would get my nod. It's not to retail - they're ALL retail. Anyway, something about the sketchiness and the subdued colors. And it channels Modigliani, of course, so hey. The fedora at the bottom clinches it. But I'm surprised you didn't go for the PKZ fox or Photo Concours posters...

My mother likes to tell this story: When she was on a bike hostel tour of Europe in the early '50s her girlfriend wanted to know directions in a certain Swiss city. She anxiously shouted to a local gentleman, "Excuse me, sir, do you speak SWISS?" That was back when Europeans could be merely amused by eanest Americans. Don't know if he actually spoke the German, French or Italian languages with the regional Swiss spin "dialect." Most likely all three. Probably not Romansch, though. That's a separate Swiss language, too obscure, a little TOO local.

Hope you had a good New Year!

DB- No more Fox stuff. Although it is the best by far. I have an email into my client for a detailed explanation of the language. HNY to you.

I love these! I also prefer the top one but I'd LOVE to have seen the one with the umbrella. I endorse the suggestion of hanging over your bed. Your client sounds like a woman with a good sense of humour.

Alice- "...sounds like a woman with a good sense of humour." She did. I hope she still does.

Great posters all.....I've not come across them before although I have been into a PKZ store years ago in either Geneva or Lausanne (I can't remember).......sartorially the Swiss are roughly in the same place as the Austrians in my mind......uber neat suiting in rather ordinary styles.....some great ethnic touches like loden coats or those short braided jackets in rough wool and some nice shoes.....overall the populace achieve uniformly high standard of appearance but with few standouts.

PKZ posters are great-and expensive. Hermann Scherrer was a Munich based sporting tailor. The Holhwein posters for Scherrer's business are incredible as well. Here's my favorite one.... http://www.internationalposter.com/poster-details.aspx?id=GEL16237

The top poster is perfect--clean and elegant with great color.

ADG - just checked the link you posted.
That is a great one.
Of the three on display here, I like the top one best.
Who are you, Trad?
Where do you live?
What is your current work, if not hopeful screenwriter?
stephanie
thosetricks.com

Joe- A quick cruise around the PKZ web site shows lots of Hugo Boss and very much what you observed. Lots of black 3 button. Actually it was a reader here who pointed out Hugo Boss designed the SS uniforms. I wonder how many agents in LA know that?

ADG- That's not a poster. That's a post card. Do you still have that framer on retention?


Things is- It's a stunning piece. But I gotta go along to get along.

stephanie-
You're the inquisitive one.
I'm nobody.
I live in NYC.
I write insurance.
I told you I was nobody.

ADG said...
"Hermann Scherrer was a Munich based sporting tailor. The Holhwein posters for Scherrer's business are incredible as well."

Tintang...yes that ONE is a small version. The poster sells for about 20k.

ADG- Your buddy Puerto is featured.

Oh, we're ALL somebody, tintin.
stephanie

Lovely posters! I'm told that the nickname of PKZ is "Papa Kann Zahlen" which translates as "Daddy can pay".

Seems you are the owner of a (I suppose) rare PKZ poster printed in Italian.
As a Swiss, I'm sure that that poster is more intresting than what PKZ offers today. Unless you aren't looking for Hugo Boss or for their in-house copy of RL. Still, I sometimes find some of their old products in thrift stores, which are welcome additions in my pretentious, poor student wardrobe

My wife and I almost bought the top poster in a vintage poster store In Hawaii for 5K, it was perfect, the blue so deep. We regret it now, but would like to find a cheap print of it. Any ideas where I could find a copy?