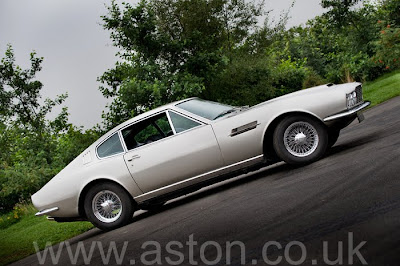 The Aston Martin DBS 6 was considered by the cognoscenti as - - Well, as a piece of crap. It was slow, heavy and not a DB. 15 years ago I found one in St Louis for $10,000. It was hunter green with a tan leather interior and had a 5 speed stick. It was the cheap ticket to an Aston. Hell, a JB Aston to boot.

A friend in London suggested I call a friend of his in the trade, Gregor Fisken before pulling the trigger. I talked to an employee who was painfully honest. Once he was aware I had the money to buy the car but little extra for upkeep he gave me a suggestion.

Good advice it was a clunker.....Aster's equivalent of the Jaguar Mk X....if you're not a skilled mechanic and coachbuilder yourself all classic cars are a money pit of unlimited depth.

I only buy Japanese sports cars. All others are only for admiration from afar and private guffawing at the repair bills.

I once crapped in my pants in an Aston Martin (I was 26 and there are were other people in the car, including women).

Joe- The DBS 6 has soared in value but who knows how they're doing today. I was warned about the hand made body panels and the strong but tempermental 6. I was told to buget 1,000 pounds a year for upkeep. That was $2,000 back then.

Anon- How'd that work out for you?

How'd that work out for you?
I didn't get laid that night.

tintin: I still think it's a clunker but more important my brother who is something of an expert having owned and restored several Jaguar XK's/Mk II's, Triumphs, Volvos and special bodied Healey 3000's thinks so too. My own classic car via dolorosa revolved around a RR Silver Dawn and believe me it was going to cost you a lot more than 1000 green ones to keep that sucker running....they are a nice dream but best to leave tham that way unless you have mechanical body shop back up!

Anon- I assumed that. I was wondering how one exits the vehicle. Or were you just tossed out?

Joe- When I asked the fella at Gregors for a reliable and cheap classic he suggested an MGB. I told him I had already owned a B (a '67) and had no desire to go down that road again.

I don't know why i brought up this story. We were stuck in traffic. Bad traffic, like George Washington bridge on a weekend traffic. I thought i could hold it in...my muscles just gave out, even before I could just open the door and shit in the middle of the traffic jam.
It was a LOOOOOOOOONG ride after that.

Tintin:
"Joe- When I asked the fella at Gregors for a reliable and cheap classic he suggested an MGB."

.....you could have looked at the earlier MG's which aren't off the charts in price, fairly low tech and don't have acres of expensive bodywork.....and people will still look at you as you drive by!....my brother has a fantastic special bodied 3000 that looks nothing like the regular Healey but much more like a 30's race car....I'm envious.

Lord spare us these mid-life crises. Let's just nip this in the bud right now, shall we?

Here's what to do: Buy a plane ticket to the south of France, rent a Ford Fusion and drive the Riviera. Fast. It's cheaper by a mile and you'll return home, assuming you survive the drive, free as a bird from the headaches of endless maintenance and monthly payments, not to mention the cost of garaging the beast. You might even meet, even at your age, a young woman who'll sit next to you, holding tight to the seat in fear.

Because driving the Riviera in a Fusion only once beats driving an Aston on the Long Island Expressway daily, any day. At least in my book.

Joe- The MGA looks great but it's just a TF with a tarted up body. I've been in love with the TC since I first saw one when I was 10 years old. I've lusted after it ever since but am certain I don't deserve it.

DB- I always wanted to rent an Alfa in Italy and do Lucca, Montefalco, Tuscany. But you know best.

There are a few 'Rent a Classic' dealers in the states now. I first saw them in London. You pay a yearly fee and are charged points depending on the car, the day of the week you rent it, etc. It's the only possible way in a city like NY. And while a drive along the Hudson up to West Point ain't the French Riviera...it ain't bad.

tintin:I've been in love with the TC since I first saw one when I was 10 years old.

....the source of my love affair with the RR Silver Dawn was a childhood memory...my father knew a guy with one and I used to drool everytime he came by(the leather smell inside was erotic)....TC's in good shape can be had for around $35k I believe.

tintin: late model (after 2003) 350Z. Be sure to get the manual tranny since the automatic has no pickup.

The 300ZX years were when my father had his midlife crisis and bought a used Ferrari BB512. That was a fun car; when you stepped on the gas it felt like an airplane taking off. But the $1000 tuneups put me off European sports cars forever.

As a student in '69 I almost bought a Goldfinger Coffin Grey (dark blood interior) '59 DB4 that hand been languishing on the original Beck's (or was it Dyer's?) lot out Independence Blvd.(TT knows the locale). Beck's/Dyer's at that time was just a gravel lot at the current Hendrick Lexus' location. The AM had a cardboard box of Massey Ferguson parts in the back. (yeah, I know, David Brown, but it was an MF box).