The Friday Belt: A Foggy Day 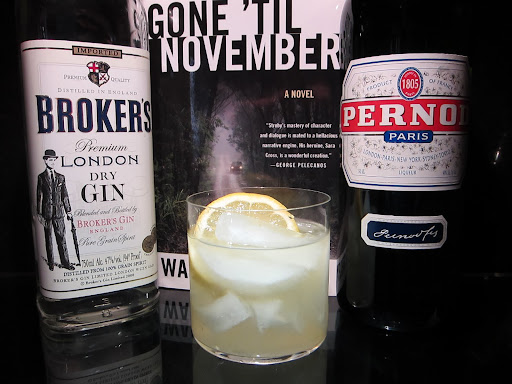 I had the gin. I always have the gin. I needed lemons and Pernod. I never keep Pernod.
Last night I cracked open Wally Stroby's new novel, Gone 'Til November. I was surprised to see my name in the acknowledgments. Why'd he do that? He also has this annoying habit of putting people's thoughts in italicized font. I finished the book and was struck by how Wally captured Florida and it's people. And the fog.
Am I making any sense? I've never seen fog like the fog I've seen in Florida. Maybe it's the elevation, the humidity, the swamps. I dunno. But it's thick and damned near impossible to drive through. Wally has a scene in the fog that's absolutely terrifying. It's bad enough dealing with mother nature in Florida but throw into the mix some heavily armed thugs from Newark, NJ and a parcel of stoned Haitian drug dealers with Soviet AKs and things get interesting.
And this morning I thought of the Foggy Day. An ounce and half of gin. A quarter ounce of Pernod. An ounce of water and a quarter ounce of lemon juice. Stir and throw in a slice of lemon. It's foggy to look at and if you have more than one -- I suggest you stay far away from I-95 between Jacksonville and St Augustine on a foggy morning. You never know what you'll run into.
Posted by tintin at 13:01

......You obviously never encountered British smog circa 1960.....it was unbelievable.....you literally couldn't see something four feet away.....can't get too excited about the pernod/gin mix cocktail in circa 15 degree temperatures.....I'll stick to the the martini or Dewars and water I think.....I actually like Pastis very much in the summer.....incredibly refreshing but without the tendency to encourage downing four which is easy with something like G&T or Campari and Soda

Last time I was in St Augustine I was five and watched a man willingly put his head in an alligator's mouth. I'm happy to say I'm far enough from these reptiles to risk attempting the same feat - likely after a half dozen Pastis.

Just started Wally's newest. Grabbed me right off! As usual.

Joe-
Re: Fog. Not in the 60s. I didn't come along to London until the late 80's. Never saw much fog in the city but do remember it in Seven Oaks one night after a wedding reception. Terrifying.

Trousers: They do push the envelope but they're all in good fun. Only pair of pants that got me a free drink in an airport bar.

Stew- The Alligator Farm. Wally did a story for the college paper on the farm and asked me to help with photos. We were allowed into the pit and I got into the prone position to take a picture of a huge gator. The employee said, "I wouldn't do that if I were you." I looked up at him, "Why, 'cause he'll attack me?" "No," he said. He'll want to mate with you."

Dad- He only used one 'K' turn, he go the weapons right but he screwed up on hand cuff keys.

Those Tricks- I thought it was in Iceland? Who cares where it is - I like the idea as well.

"Only pair of pants that got me a free drink in an airport bar."

....Probably thought you needed a handout....ho.ho.ho.

Joe- It was a week before Christmas. I was told I was festive. So they got that going for 'em...which is good.

"Only pair of pants that got me a free drink in an airport bar."

for those trousers and that belt, a Mount Gay & tonic might be nice

tintin:"I was told I was festive."

I'll read anything Wally writes. And the drink looks good. I usually prefer the gin over vodka myself.

So you're saying you got through the whole book in 1 day? Didn't the gin-pernod affect that?

Like the pants and cocktail, but lets focus on important recent events.

WASP101 has called you out! He is beating his skinny little pale chest saying you would not call him names to his face.

My dough is on the former deputy sherrif and Army man. Anyone want to take ol Richard's side? How can we make this happen?

Boy, I wish that little gem had creeped into your thoughts before my feet ever hit the swamp in Jax...

Right;
It finally jit me this morning, King Cole bar at the St. Regis;
having an epithany this a.m. while watching the Devil wears Prada,
remembered the infamous mural!
Leslie