Friday Belt: A Sucker for Color 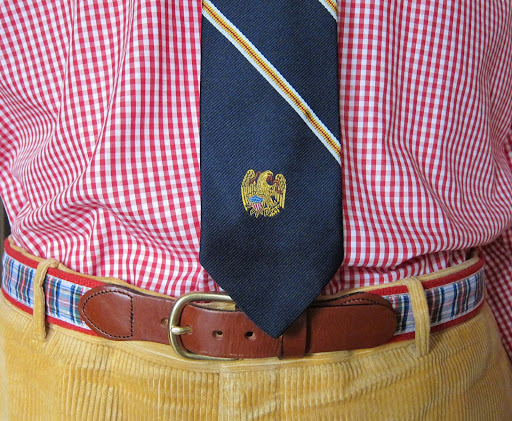 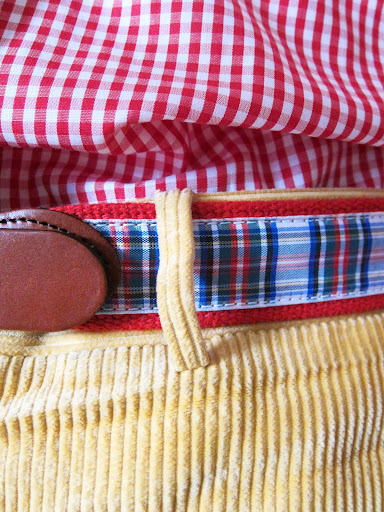 The pattern matching is off on that belt loop 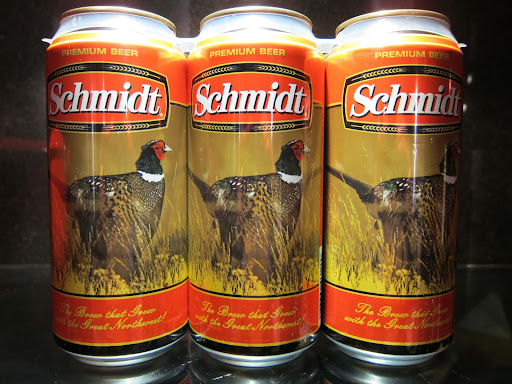 A 6 pack that belongs in MOMA
In Jungle Expert School we tried to lure spider monkeys from the trees with shiny c- ration can tops in the hope of fresh meat. If I were a spider monkey in Panama I would have been dead a long time ago. I like bright and shiny.
Friday's belt is a tartan from Leather Man. They're a surcingle belt and cheap as all get out. Less than 30 bucks and you're still getting something very original. You pick out the ribbon and the backing from plenty of options. That's a Dress Stewart ribbon on red cotton webbing.
We went into Colon and I was introduced to legalized prostitution and nasty Panamanian hooch. One outta two ain't bad. There was a local whiskey that tasted like tea and their beer was horrible. You could say the same for Schmidt but is that can a work of art or what?
It has a sour/tart after taste but it's crisp and drinks well when it's really cold. Take one out of the fridge and pop it into the freezer for five minutes. I would imagine pee tastes good that cold but I'd prefer to imagine. $14 a case. I hear you can find it for $11 a case in some places. And sitting among today's most boring packaging, beer bottles and cans, it really stands out with a nostalgia I like.
Cheap beer and cheap belts. You couldn't ask for more. Except maybe cheap prostitution which takes us back to Panama.
Posted by tintin at 06:07

Here is a distributor locator:
http://www.schmidtbeer.com/locator/
for any motivated drinkers

....yes but you get away with it because of the large solid of the cord pants and the strength of the red gingham relative to the belt plaid....the only marginal bum note is the eagle on the tie but overall it looks pretty good!......I'll ask Mike my local store owner about Schmidt availability.

Sean- Thanks for that. I wish I knew where I could find it for $11 a case.

Joe- Of course your right. It does work but I would say the tie, a $20 Polyester job from the Smithsonian, gives it a regular guy aplomb. Also, the primary colors of yellow, blue and red are keeping it from getting too out of hand.

Schmidt has a slight cinnamon taste that's unique and I like it. It's very subtle and it's probably corn syrup but what the hell do you want for .33 cents a pint.

"a $20 Polyester job from the Smithsonian"

.....I knew there had to be an explanation for the eagle!

I was 2bn(rgr)75thinf in the very early 80s---starting March of '80. Went through the Jungle School twice. Cakewalk, of course. 10 years ago a friend and I went duck hunting. Once we got to the blind he introduced me to a friend of his who was already there. Sometime between killing ducks and a late morning nap this cat told me after duck season he runs his boss's big boat for billfish out of Panama. "Where in Panama?" sez I.
"Colon." "Ahhh, so you're familiar with the girls of El Moro." He looked like he'd seen a ghost. That was a fun place, 3 storey whorehouse, bar on the first floor with an elevator to the 'love chambers.' Had a lot of fun in Panama.

Jeremiah- Did you meet E. Haney or had he already left Rangers for Bragg?

I always feel like I risk looking like a walking table cloth. But what you put together looks nice.

Schmidt beer and blondes go good together. No matter how much you had the night before, the tiny little headache the next morning is worth all the fun you had. I loved that beer, but that's not the can I remember.

Almost perfect, Tin. Pheasant tie would have been almost too good.

Off to score some Schmidt's in Seattle. Will post if I do.

Thanks for a great belt.

CG - The history of Schmidt is pretty confusing and not to be confused with the Philadelphia Schmidts but I know the cans you speak of. White background with animals. In fact, I think it was called animal beer or all animal. Wait, All Animal was the 82nd Abn Div.

Doug- I try not to be too matchy matchy around here.

.....it's all in your mind...but then to be honest a lot of one's clothing preferences reside there....gingham checks of various sizes are an essential part of any shirt closet....carefully chosen they go with anything from cords to blue chalk stripes.....they're particularly popular with architects in my experience....must be all those straight lines.

Keep on posting such themes. I love to read blogs like that. Just add some pics :)

Clearly, you are not getting your booze in Pennsylvania. The only thing that cheap around here is probably Natty Ice, and who wants to drink a beer whose flavor was intentionally sacrificed in favor of higher alcohol content?

My dad called you guys "Snake Charmers." He'd tell me that they dropped you into the jungle with a extra set of bootlaces, a K-Bar, iodine tabs and a safety pin and pick you up a week later.

Hmmm.. gingham and summer maybe. It would be a bit too colonial (no pun intended) in a pop over. Do you get a lot of those done? I've got one on its last legs -- linen and cotton -- great for the beach.

The belt is a deal and a half for an original. I checked, they don't have Mrs. E's tartan.

When I wear flannel, it's vodka martini's, negroni's, Disaronno, and wines...

What you wear is what you drink.

I just wouldn't know what to drink with gingham....

this shirt and belt combo is making us weep with joy. - kat

"initials CG said... I just wouldn't know what to drink with gingham...."

I believe you pulled it off quite dashingly.

RE: Initials CG comment.
"I just wouldn't know what to drink with gingham...."
Answer: SWILL.
RE: Easy and Elegant Life comment.
It wasn't "Snake Charmers". It was Snake Eaters.
RE: Comments on Smithsonian.
Some good stuff there. I'm wearing a VN G.I. issue watch replica for $30 and bought Anne a nice turquoise necklace for $60.
CAUTION! Smithsonian is like PBS. Donate once and get begging emails forever.