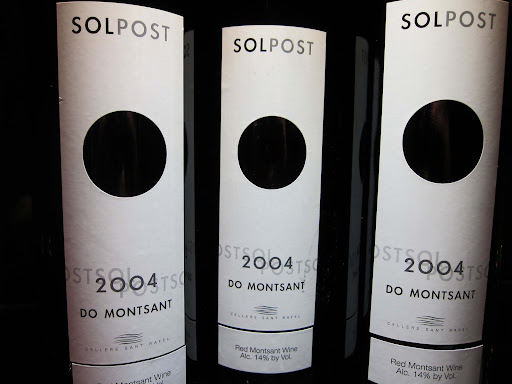 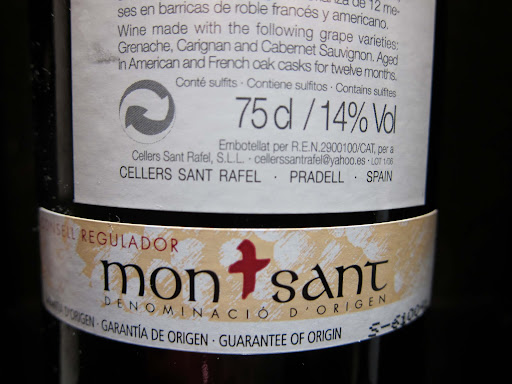 Ask for it by region 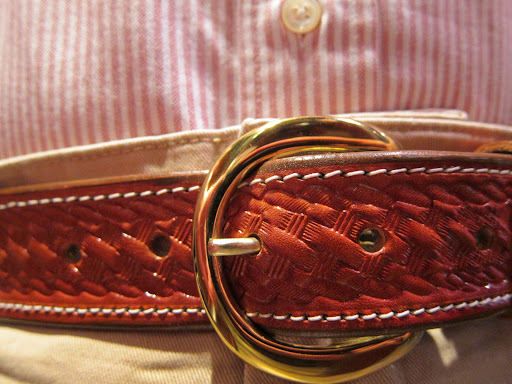 Spain has always had a cowboy image for me. Maybe it started with Sergio Leone and the Clint Eastwood westerns which, while Italian, were shot in Spain. I also like that Spain is regional with blonde, blue eyed bag pipe players in the north and the more standard Spainard in the south. I've never been to Spain but when I go -- This is where I'm going...
Montsant. Remember that. It's an area of northern Spain that wraps around the Priorat region. Five years ago my NYC foodie buddy and client introduced me to Priorat wines. Big mothers that were unique and cheap and perfect for smoked meat tapas. Word got out about Priorat and prices have soared. You find a bargain. Word gets out. The old distributor gets fired. The wine disappears for a year and a new distributor brings it back at four times what you were paying for it.
Montsant is still a secret. Most people who work in wine don't know it but be assured they will. My NYC foodie buddy turned me onto these wines last Summer. Fantastic reds for $15 to $25. Big and earthy and easy to drink. I don't even decant. Like the Priorats, these are bang on with meat. Big steaks, winter stews, smoked meats, bean soups and anything else that lacks subtlety like BBQ ribs and rack of lamb. I recommend calling wine stores and asking for anything from Montsant. Anything! If they know it and have it --you're in luck and not in Ft Wayne.
Basket weave belts always remind me of the Sam Browne rig I had as a deputy sheriff. But basket weave in this tan reminds me of the American west, Justin boots, a gas station in Amarillo with nothing but pancake flat around it. Clint Eastwood's character wore this belt when he stepped off the helicopter on top of the Pan Am building in Coogan's Bluff. If he didn't he should have. $30 for a suede lined belt made by Triple K in San Diego. You can't beat that with a stick.
It's regional to be sure. At home out west or in the south east and just like Coogan it's refreshing to see it here in NYC. Something out of place but telling in it's simplicity and charm. Nothing Gucci 'G' or Hermes 'H' screaming from a man's crotch. Just a simple and quiet, "Yes, ma'am."
Posted by tintin at 08:21

Spain is my favorite country.

Spain outside of the coast is something of an unexplored tourist destination.....they also eat incredibly late in the day.....I've been to restaurants on that enclosed square in Madrid (forget name)at 10.30 pm and they are packed with people just sitting down to dinner....and smoking to beat the devil....I haven't been for a few years so perhaps the smoking Nazis have cut this back....the Spaniards smoke the strongest tobacco in Western Europe.

That's an ugly ass belt. I wouldn't tell Eastwood that but I'll chance it with you TimTim.

I will try this wine. Thanks for the tip on how to ask - wouldn't have known.

Damn. Sounds like what happened with Chilean reds in the early- to mid-90s.

3K is the shit. I have a 3K shotshell bandolero and waterfowl strap. Great stuff.

Eight comments? I take pictures, I research wine domaines - in freakin' Spain! I find a kick ass belt that sells for spit - - turn you people onto it and I get 8 commets in 10 hours? The other day I post something about a 25 year old girl getting wet and I have 8 comments in an hour.

Is that it? Is that what you want? Ok, then. I think I hear you. By the way, I'm not answering your comments anymore. Whoever Anon is with the Washington Irving crap kicked it off. Where's Heavy Tweed? I tell you where ...he's on leave and if I don't get some damned insightful comments with intelligent questions I'm joining him. Not in Japan -- but you know what I mean.

.....face it....girls getting wet is intrinsically more interesting than the architecture of Gaudi!

" By the way, I'm not answering your comments anymore."

More posts like "...Bemberg" and you're likely netting monetary donations.

Whoever Anon is with the Washington Irving crap kicked it off.
.. whoa.. sorry ...
you did say . I've never been to Spain but when I go -
just trying to be helpful... sorry.. won't make that mistake again.

Anon- I don't want to even think about Washington Irving when I go to Spain. I want bull fights and sweaty blonde girls with a passion for red wine, red meat and all American red blooded boys. Washington Irving? Do you work for the National Park Service?

Joe- You're wearing me down.

No, it's not the DeLaurentis funded '80s flick. Yes, Joe's wearing us all down and I just finished my fourth martini... Ho-Jon!

ADG- I almost forgot...there was a show on the BBC about vagina's last night. Perfect timing for you.

Stew- I may propose to you. Cafe Flesh is the real deal and not known to very many.

Dear Tintin,
Sorry I haven't been commenting lately. Lots of drama at the homestead. Just know you are appreciated. D

Eight comments? I take pictures, I research wine domaines - in freakin' Spain! I find a kick ass belt that sells
sweetheart, have you ever considered that your post was not that engaging? effort does not equal quality.. and even if it did, not all good, informative posts = lots of comments.
the weather report is far more useful than a maureen dowd nyt column, but guess which generates more comments?

I want bull fights and sweaty blonde girls with a passion for red wine, red meat
you want argentina, not spain.

tintin:"Joe- You're wearing me down."

Of course there are historical reasons for the fair skin, light eyed people in the north of Spain. So glad you knew that because my grandmother was one! Cool, green Galicia more resembles Ireland than southern Spain.

you want argentina, not spain."

......Actually he wants Italy or Britain

This is a highly dramatic men's lounge. I still plan to try this wine. Tintin, your responses are a bonus, but I post because I want to.

I spent a semester abroad in Salamanca, Spain and I have to say, I love Spanish wine. I was particularly fond of some of the stuff you find in the bodegas. I hope you make it out there someday - it's a fantastic culinary experience.

sunshine,
any stores below 23rd that stock it, what?

Lwing- You want I should do another camera review for you. BTW, where's you blog?

D- Going thru some of that myself. We'll wait for you.

Joe- Not comments so much as posts of their own. I'm not complaining.

DB There are some wonderful images of Christina Sanchez, Spains 1st woman bullfighter. I know we've talked about her before. If I was 15 again I'd have her poster in my bedrooom.

Cathleen- You're comments are always welcome here. I'm just sad because the boys here only want cheap sexual stories. I do too but I can't write them.

Anon 9:53 Nothing a decent hospital in Chicago couldn't cure, TB.

You're right about Montsant, though. Good stuff, none too dear.

^Not many of the west Texas red dirt troubadour genre drop throw-away lines in re theory of relativity.