Robert E. Bryan was the men's fashion director of the NY Times Magazine, the men's editor at W, fashion editor of Men's Wear Magazine and most importantly (to me), fashion director of 'M' magazine. His new book, American Fashion Menswear came out last September. Last week we sat down in the bespoke room of David Chu's townhouse and talked about his life. This is the first of three parts that will run through the week. 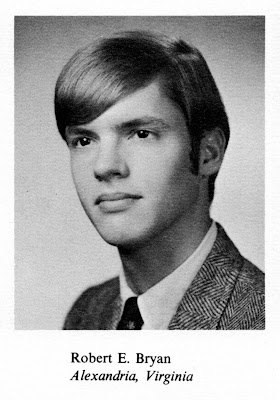 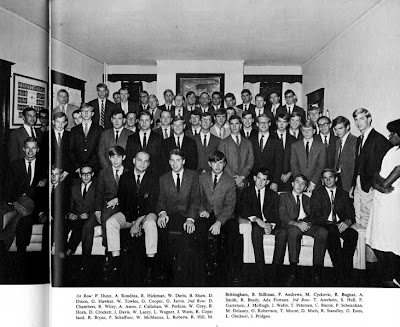 Born in Orlando but raised in Alexandria, VA, Bryan embraced the Elvis greased hair look as an 11, 12 and 13 year old only to give up all style as a loner in high school. Bryan remembers, "I had no idea about fashion and so I was a clean slate waiting to be written upon by ivy style. A 1967 graduate of the University of Virginia and a member of Delta Sigma Phi, "In those days there was a coat and tie tradition. Even if you had on your Bermuda shorts and your Weejuns without socks - - You still had on a coat and tie. "
"I became a very good ivy dresser I must say. I really got into it. It was a natural. As did everybody else there. As I say, it was the tradition and tradition is very big at UVa. " Bryan remembers only one person, a hippie, who ventured outside the norm. "...everybody else was button down collars and club ties and Eljo's to the tee. So, it was the perfect background for, well, for 'M' Magazine for one thing."

In 1968, Bryan moved to NYC and worked for Abraham & Strauss in the Groove Shop and flirted with the Hippie - Carnaby Street style before pursuing 30's and 40's vintage clothing. "There was a group. A very fashionable group in New York who was wearing those very baggy pleated pants in '69 and '70...they had already brought them back." "You mean Oxford bags?" I ask. "They were not that full. Plenty full but still tapered. That's still my favorite silhouette - the short fitted jacket with full cut trouser."
We discuss the Internet fashion forums and posters who argue 60's ivy khakis were baggy. "Well, if you're talking about the early 50's - sure. But not in the 60's. The whole essence of the ivy look was the plain front slimmer pant." Bryan adds, "It's unusual how certain things do stay around. "
When I ask about Thom Browne it's clear Bryan has sympathy for the designer but he's also critical. "He made the suit fashion again - - by shrinking it. Even so, if you can clear your head of the fashion aura of it - it looks ridiculous on practically everyone but skinny 20 year olds. He's made the suit into a costume. Into a funny costume but he's made it fashion. Fashion is about extremes. Going to extremes. And he's taken the suit to an extreme and now I think he's trying to evolve out of that."
I mention the amazing quality and heft of a Thom Browne oxford shirt I own and Ryan agrees, "Truth be known, a lot of the stuff in his line is wonderful. The sweaters, the knitwear, the shirts, the ties, the footwear, all these things, it's just that he has played with the proportions of very classic menswear to make them stand out as fashion today."
I ask if he thinks Kenneth Cole square toe shoes are vulgar. "I just think they're ugly," Bryan says adding, " I think the ugliest idea in fashion that has ever happened is the idea of wearing your pants down around your ankles as you walk around and have to continually be pulling them up. It looks ridiculous, stupid and ugly. I don't know if you can top that."
After two and half years as a buyer at May Company, Bryan interviews and accepts a position as men's fashion editor at Menswear Magazine in 1973. "Menswear, next to DNR, was the oldest Fairchild publication. And then it was decided that Menswear Magazine was competing against DNR for advertising dollars and they didn't need both so they decided to evolve Menswear Magazine into 'M' Magazine."
Tomorrow - Robert Bryan at 'M'
Posted by tintin at 07:07

Great post! I'm looking forward to the next chapter. I also appreciated his comments on Thom Browne.

Wow. Imagine my surprise this morning when I wake up to discover my fraternity in The Trad, and not only that but i find out that Robert E. Brown was fashion director/editor at many of these revered publications.

I'm a 2008 UVA grad, and a Delta Sig myself, so not only is it great to read about a fellow Wahoo, but it's also incredible to learn that he gained his impeccable Ivy style sensibilities while in Delta Sigma Phi haha.

Looking forward to the rest!

WA-HOO-WA! Great post. I miss Eljo's something fierce. great clothes and friendly, helpful staff. I am looking forward to walking through the doors again, during my 10th this Summer.

Ditto on Mr. Browne's apparrel. I am surprised he attracted the attention of the folks at BB, considering his stuff is sold within spitting distance of their display featuring Mr. Lincoln's topcoat at the Madison Avenue store.

Any chance you would be interested in writing a post about signet rings and morning suits? I'm walking down "Memory Lawn" again.

Speaking as a former pompadour man and prep school kid myself... beautiful, just beautiful. Looking forward to reading the rest.

It was a fine magazine. Wish I'd kept them.

Great post and how things have changed. Sometime way back in the late 1970s when I visited my older brother at the Univeristy of Maryland, I was amazed at the the way that he and his fraternity brothers wore jackets an ties on weekend dates.
I was so impressed. I assumed it was a Southern thing.