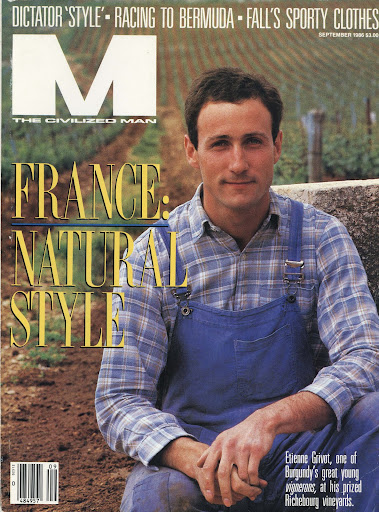 It's fitting to start off Robert Bryan's tenure at 'M' with the above cover.

Publisher and owner, John Fairchild discusses natural style and this specific cover in his book, Chic Savages. Fairchild points out that natural style is achieved by, "...going against the grain, by not following fashion's crowd." That cover was on Fairchild's office wall as a reminder.

That's Mr. Bryan in the brown double breasted suit towards the right. In a room full of 'fashion' Robert's beloved 30's style stands heads and shoulders above the sea of hip. I can find a lot of things wrong with how others dress (as they can with me) but this man's attire is perfect every time I see him. 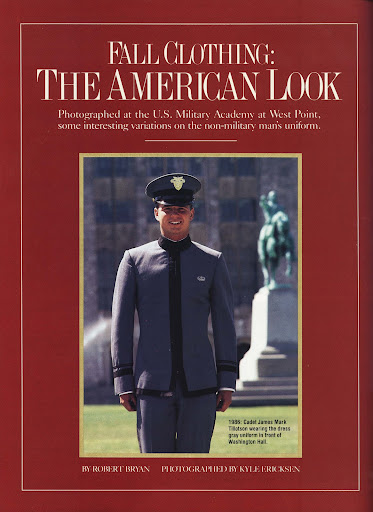 When I asked Robert what his most memorable 'M' was, he told me the West Point issue (August 1986). And for a couple of reasons. Shot by Robert's very good friend, Kyle Ericksen (still at Fairchild Group), Robert explains, "It was the shoot where I nearly killed myself." 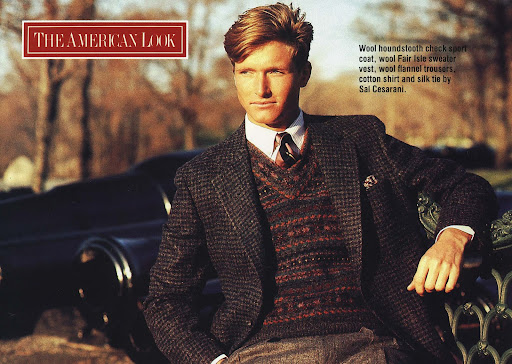 "There was this cannon and in back of the cannon, you know, there's this. Well, you have something to hook onto..." Excuse me. Robert is a brilliant fashion editor and writer. Not so much with artillery. It took a while to figure out he stepped between the cannon and the carriage. I'll let him finish, "I was styling this model who was in some position around the cannon and I just stepped up on it and I was moving so quickly I didn't even look. My foot went right through the thing in the middle and right down to the bottom and I was bruised and cut and could hardly walk the next day." 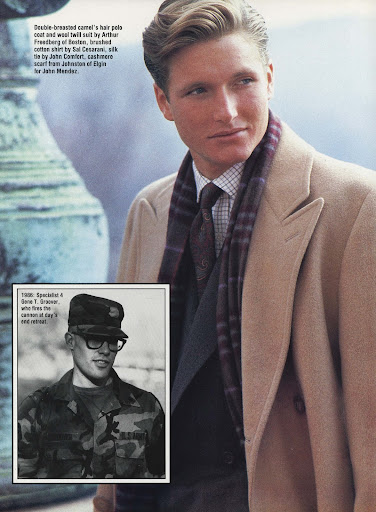 Bryan continued working with Eriksen even after 'M' folded. "At DNR, I usually worked with her on photo shoots which was fun because you didn't have the pressure. It was quick and easy. We just went out and would go to some wonderful architectural location and models would change clothes in the street.We did a lot of that for 'M' too. I don't remember if we ever had a van. Everything was done on the cheap. I didn't have an assistant at 'M' and I had to do everything." 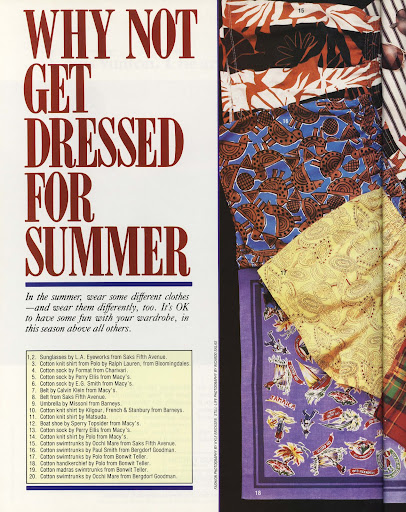 It's a good thing Robert did these still life's. A simple and elegant layout of apparel and accessories in amazing primary colors. 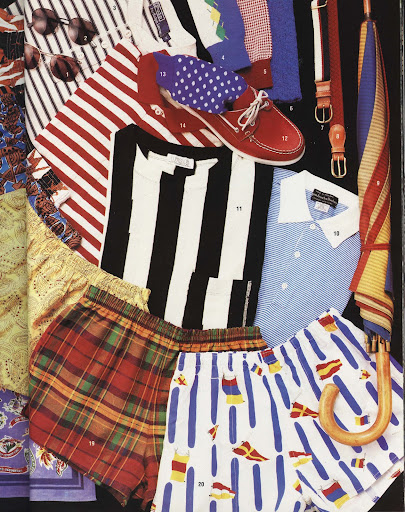 I explain I've never seen anything like these before or since. Robert explained, "I did that at Men's Wear Magazine too." 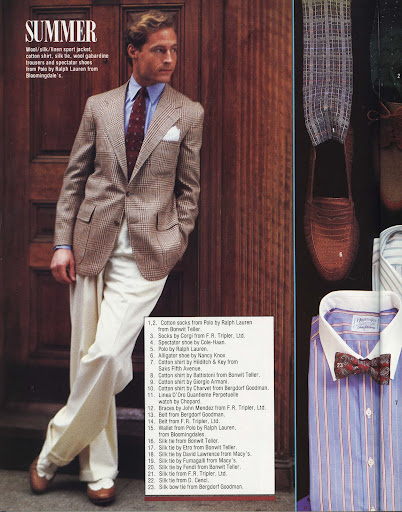 I love this Kyle Ericksen photo of the model wearing spectators. Every Spring I consider pulling the trigger on a pair just because of this picture. I'm betting Mr Bryan sold a lot of clothes at M. 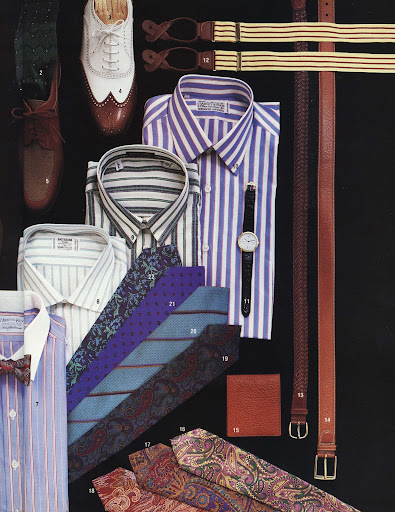 I tell Robert about my love of the shirt labels in the photos. As a park ranger taking home $400 a month, these pictures were as close as I could get to a Hilditch and Key shirt. "I think I should have covered the label in some way," Robert tells me. 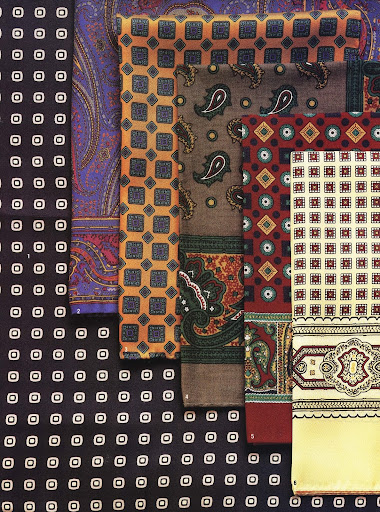 "In the beginning, it ('M') was so conservative that I could not really express my 1930's aesthetic. It had to be more a 50's - 60's ivy league aesthetic. I remember that Kevin Doyle (editor-in-chief) thought a three button jacket was crazy. Just wild. Because two buttons had been worn, well, I guess throughout the 70's and the 80's."
Robert adds, "It was only in the late 80's that the three button jacket started to come back. God forbid I should show a belted back jacket. They thought that was the worse. But gradually as the years went by, 85, six, seven -- I could express more of a sophisticated traditional look of the 30's. More in line with Fred Astaire or Cary Grant and not just this very conservative ivy league aesthetic." 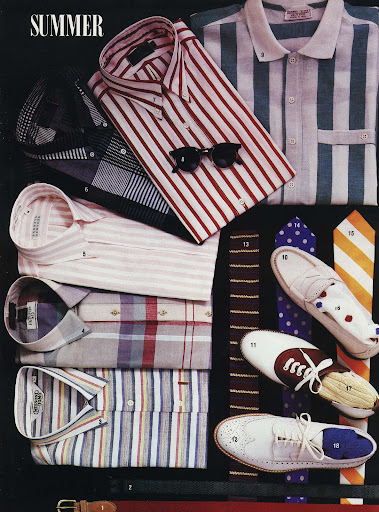 While conservative in dress, Bryan was not in his politics or his life. "M was terribly Republican and the irony was Kevin Doyle was in a rock band and was a Democrat and I was a Democrat." The powers that be at 'M' had great love for the Regans but it was liberals directing the writing and the fashion.
Neither Republican or Democrat was the paper stock. "We used the very best paper available." Bryan tells me. For a magazine whose target readers were the husbands of 'W' readers - I would expect nothing less.
And for the best - Michael Coady (number two to Fairchild and now publishing 'C' in California) believed only the very select should know. Consequently, marketing was by word of mouth. If you didn't know about it - - You didn't need to. Consequently, 'M' never made a profit.
'M' started out as early as 1982 and carried it's name next to Men's Wear with the first pure issue coming out with Prince Phillip on the cover in October of '83. Ironically, 'M' would again carry two names on its cover.

In the September 1990 issue (at 316 pages one of the largest ever) it became 'M Inc.' due to a merger with Manhattan, Inc Magazine. With Clay Felker joining the masthead it's not difficult to understand Robert's misplaced optimism. M Inc. would fold in two years.

Now THIS is an example of when M was batting a thousand.

Someone really ought to bring out a commemorative "Best Of..." edition of this mag.

tintin: I must admit that after some scepticism about your focus on M, I'm impressed when I'm reminded of some of the photo spreads and covers....I remember the shoot with the guy in the light brown jacket and spectators....I went right out and bought a similar set of kit (sans spectators...like you never brave enough)

Very nice. I liked M; clipped most of them up and have since tossed or lost the clippings.

Um, "Reagans" I should think.

Joe- I don't buy outfits but I know where you're coming from.

Jeremiah- The evils of spell check and the public schools of NC.

Dumb question - in the 5th picture, is SP4 Grover also the model in the polo coat?

W Essex- No such thing as a dumb question 'round here...except that one.

No, click on pic and it'll enlarge enough for you to see. By the way, is it just me or does Groover's army issue glasses (we called them 'birth control glasses when I was in) look amazingly hipster?

I'm betting you can get them at Morgenthal Frederics (in Buffalo horn no doubt) for $1,300.

I did enlarge, but still wasn't clear. I always wanted BCD sunglasses (tortise with blue lenses if I recall), but I think you needed to have a perscription. I got out in 2001 and I think they were phasing them out - LAME!

They were pretty bad. My father's in the 60's were even worse.

Was in Morgenthal F a couple weeks ago. They're selling Randolph Sunglasses for $750. Salesman told ne they were vintage 60's. Amazing what happens in NYC.

tintin:"Joe- I don't buy outfits but I know where you're coming from."

....Never bought a sportcoat and pair of bags....you must be unique

OK, someone answer me this. I loved M as well, but why does the GQ masthead say "incorporating M Magazine" to this day?

N.K.'s Goodyear welted dress shoes and Balmoral boots were made in Dublin by Winstanley, long defunct. Winstanley made Paul Stuart's premier line in the early '80s before Edward Green before the current William Green & Son (Grenson).

The H&K London RTW shirts of that era had double-needle topstitched arm seams and an inch of extension cloth tucked within the arm seam - a relative oddity when Mr. Flusser highly praised H&K in his first book.

I like monograms just as much as the next preppy guy, but the little numbers monogrammed on everything (in the photos) is taking it too far. ;)

"Laguna Beach Trad said...
I like monograms just as much as the next preppy guy"

....I was rather put off them after once working with a guy who had an identity crisis....he was rather small, favored POW check DB suits with really broad shoulders... and had three monograms on his shirts...I kid you not....three(waist, cuff and nipple).

Joe- I rarely buy a sport jacket and a pr of trousers together. I try (try is key) to plan a purchase and usually (usually is key) buy a jacket or pant that'll go w/anything or at least a lot. I'm about 74% succesful.

witz- I would imagine it has something to do with the $650 million clams Newhouse paid for Fairchild.

Tater- Man, you amaze me. H&K shirts still are the only reasonably priced (compared to Turnbull) ready made shirts I've found with yoke to sleeve pattern matching. I have a few in the most bizzare color stripe combinations.

LBT- As our culture continues to nose dive, it won't be long before some cretin designer comes out with a monogramed '69' shirt. "For when you're feeling lucky."

Joe- Are you saying 'small' people have identity issues? That's bold talk for someone named after a condom.

.....no....just people with three monograms on their shirts!

tintin:"H&K shirts still are the only reasonably priced (compared to Turnbull) ready made shirts I've found with yoke to sleeve pattern matching."

.....I'm afraid you're wrong about this one tintin......Pink's yokes and sleeves usually match as do the Harvie and Hudson ready mades you were dissing the other day....it's one of the things I always check in shirt stores a bit like I do with ready made pant pleats....do they face front or back.

Joe- I would never diss H&H. Have a number of them and the stripes (and gingham) don't match. Still, they're great shirts, wonderful colors and decent ties for the value. Plus, I love their store on Jermyn St. Right outta the Fast Show's, "Suits You."

Pink? Overpriced and east european made schmata. Don't get me started on how they've bs'ed their customers. Brilliant marketing for cotton that feels like sandpaper. Usually matches means you were lucky you got a match. A shirt maker either matches patterns (Turnbull, H&K) or they don't.

....Oh I thought you did when you said they had never ending sales of cheap shirts.....I've got a few of their tattersall check ready mades that I've bought myself and a few stripes people have bought me as presents knowing I buy custom shirts there......the patterns all match fairly well....maybe some of the tattersall lines are off a bit.... I checked before I made the comment(I am a dedicated HH fan)

.....Pink....agree about them being overpriced and their marketing skills(although not necessarily about the fabrics which vary in quality) but I've got a few as gifts which all match fairly well.....so maybe I was lucky