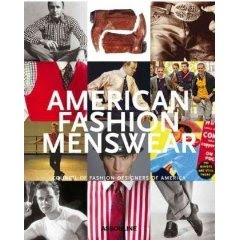 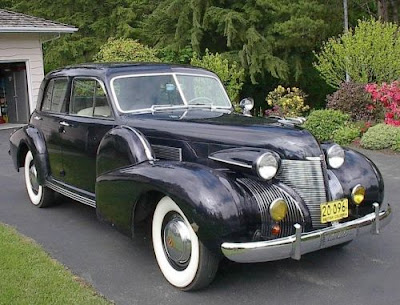 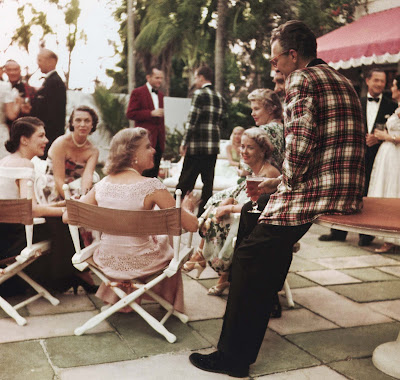 "...daredevils whose audacity is reflected by their clothes." R.E.B. 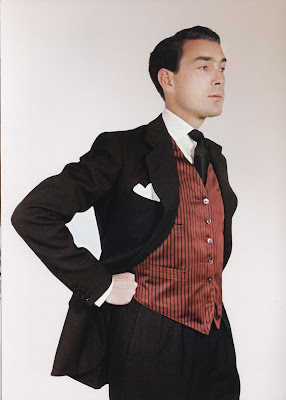 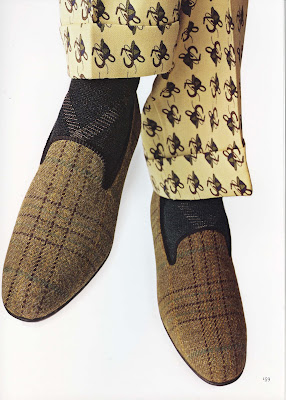 Flusser - "Alan knows his business better than anyone." R.E.B. 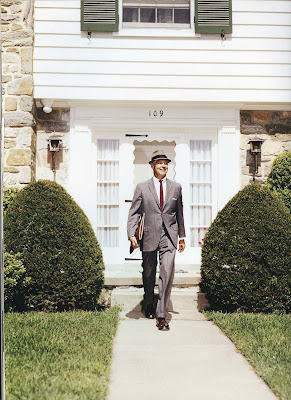 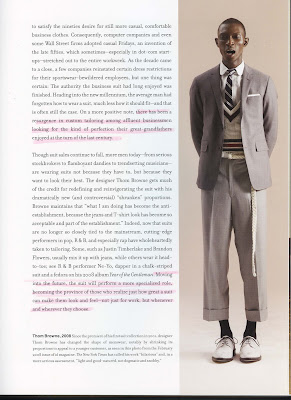 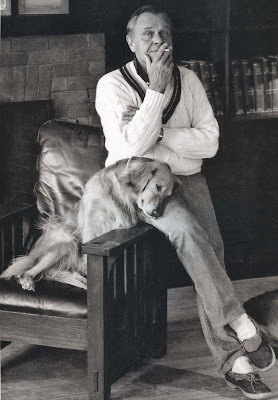 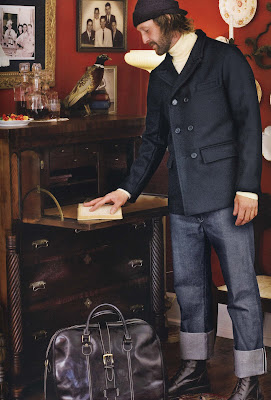 "...would be construction workers who just can't make it to an army-navy store." R.E.B. 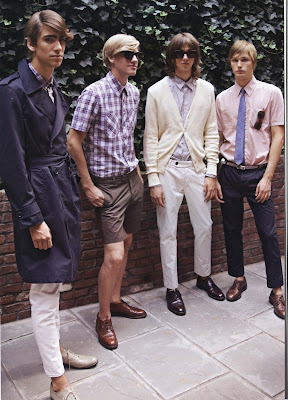 "Whatever creation comes down the runway. Whether it suits them or not." R.E.B. 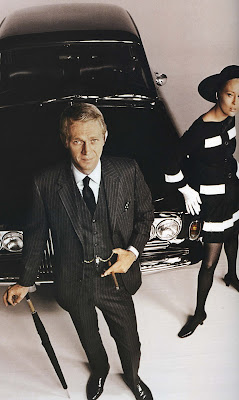 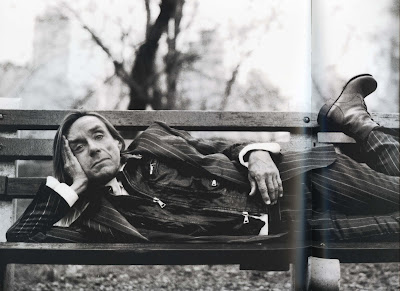 Iggy- Rock Style
Sitting across from Robert Bryan is a lesson in quiet style. David Chu's Bespoke room is out of early 19th century London with the Regency period furniture, chrome and glass tables and Empire chairs with tasteful black and white prints surrounding us. It's done up pretty big.
Robert wears a simple blue blazer, black sweater vest, black and white polka dot bow tie, and a stark white button down with a perfect roll. He's wearing a stone grey corduroy pant and when he crosses his legs I notice brown paddock boots.
The cords are a perfect shade of steel grey and pair well with the black and white. But whats up with the brown boots? I would've thought black. But it works. And it's not predictable. And it's Robert Bryan who wrote in his new book, American Fashion Menswear, "In one hundred years, men's attire has shifted from tailoring to T-shirts." That sums it up nicely.
To get things going I asked Robert a series of questions. He needed no elaboration.
Esquire or GQ? "Yesterday - Esquire without doubt. Today - GQ
Swivel or Link? Link looks so much better but swivel is much easier.
Flusser or Boyer? Alan knows his business better than anyone.
Italian or English? English without a doubt.
Center or Side? Actually, I prefer unvented.
Madras or Batik? Madras.
Brooks or Press? Brooks.
Browne or Bastian? That's cruel. I can't wear any Thom Browne. I can wear all of Michael Bastian. Bastian is connected with the ivy league feeling, the textures, the colors. Thom is more old fashioned and historical. Thom is a creative force. Bastian is much easier to wear.
Stick or Auto? I had a stick. A 1939 Cadillac Series 60 (Black four door). Whitewall tires have disappeared.
Bergdorf's or Bloomingdale's? Bergdorf's! I'm in awe of how beautiful it all is.
Orvis or Bean? Bean. They're both wonderful.
Shawl or Peak? Peak. Shawl is for the young.
Lobb or Green? I've never bought either but I prefer Lobb.
Hackett or Old England? That's a tough one. I guess Hackett.
Waistcoat or Vest? Vest
Frazier or Merkin? I would say Richard Merkin. I met him on occasion but a real character I knew very well was Hardy Amies.
Gucci or Alden? Alden! No question there.
Hermes or Ferragamo? You know, I have such a prejudice against Hermes ties I'll say Ferragamo. Really, I'm not in love with either but I loathe Hermes.
Robert and I discussed the fashion industry and what was happening in that world. Sparing no punches, he calls it, "Pretentiously unpretentious. That is the essence of what style is now. To have this unpretentious aesthetic but to work really hard at putting it...Like, as though you would normally wear jeans with a tailored jacket. You go out of your way to do that and to wear combat boots with that.

After almost 30 years of wearing the same type of clothing, it's hard for me to grasp the following . I mean, I always knew it but I just didn't know where it was coming from. Richard explains, "In general, a lot of them, certainly in fashion, are not really committed because they're trendy. They're fashion for the moment. On top of that they don't have an attention span to stay interested in anything. It's always, "What's next? What's new?" They're not really genuinely committed to a particular idea or look or style or feeling. It's just whatever's in style at the moment. They can't appreciate it until it's on the runway.

I tell stories to Robert. And from listening to the tapes, way too many. But I hear passion on these tapes when Robert tells me about vintage, the 60 series, ivy, pleated pants and his years at 'M.' After almost two and half hours we pack up to leave.

Waiting for the elevator, I see a tartan jacket with a shawl collar laying across an arm of a chair about 40 feet away. I ask Robert, "Is that a dinner jacket?" He squints his eyes, "Nope. Smoking jacket." Now that's what I call a professional.

Of these pics....Blass was the man!.....always incredibly stylish and innovative but never, never, looked like an eccentric!.....Robert's book looks very good!

Wonderful interview. I found myself in agreement with most of his answers to your queries, but I don't understand his hostility to Hermes. I mean, WTF?!

I appreciate the fact these interviews really didn't push his new book with Assouline too aggressively, which somehow makes me want to get it all the more. I did leaf through a copy a couple of weeks ago and it looks fantastic.

I wonder what REB makes of the "workwear" fad making its way through the urban hipster crowd...?

The sight of young college-trained professionals slumming it in work jackets, lumberjack shirts, carefully groomed facial hair, designer denim, and Red Wing work boots, most of whom would probably consider a stroll through Central Park on a sunny Saturday afternoon a dangerous hiking expedition, is almost too preposterous for words.

Loved it too, but really. Vest? Has this man no idea who Rab C Nesbitt is?

"but I don't understand his hostility to Hermes. I mean, WTF?!"

.....There's actually quite a lot of inverted snobbery among the male fashion crowd when it comes to Hermes...god knows why....I'm not personally addicted to pictures on ties but a couple are fine and you can't do better than Hermes who are often quite "tongue in cheek" humorous .....also couldn't agree more about the dangerous hiking in Central Park.....I have never understood the attraction of the bozo look once you pass 20.

Wonder what he'd have said to "Terrier or Retriever?" Probably prefers cats.

fantastic series, truly resonates with me. thanks for this.

Joe- Bill had great taste. The pics of his apt at One Sutton are amazing. I think of all the pics I've seen of him there's only two or three where he doesn't have a cigarette going.

LBT- REB is not alone in his dislike for the Hermes tie. For the Hermes fan (and many are in the finacial world) they are an icon easily ID'ed at 50 paces. I know guys in London who only wear Hermes ties and keep count of how many they have.

REB thinks they're a cliche. I got on the H wagon 15 years ago because I was working in London (in the short yellow school bus of finance) and have a bunch of 'em. I even kept the boxes and ribbon. About 18 months ago I put five (w/box) on ebay and made $400. I put up another five (w/box) and they did about $340. I'll start putting some more up and whittle it down to the few I really like.

I swear, I think the Tintin ties from the 90's are more colorful and they hold a knot which Hermes has never been able to do.

As regards to hipsters in red wings- his call on that is clear. He calls it Pretentiously unpretentious. I dress this way 'cause I really don't care but in reality I do care, I just don't want anyone thinking I do care 'cause that would be so unhip. I saw a guy earlier this week on 57th just west of 5th wearing a very normal sport jacket and tie with sweater vest. He paired it with camo fatigue pants with bloused jungle boots. I'm sure the pants set him back $750 at Bergforfs (see M Bastian).

ELS- Who do you use to translate that show?

Joe- I still think Hermes has the most beautiful sales women. I wonder if they're for sale?

Anon- I think he'd say a retriever is cliche (I know I would) and that the cat comment would be funny if the person commenting had balls enough not to hide.

paul- Glad you're not hiding. Glad you enjoyed it.

"REB thinks they're a cliche."

.....Of course they are a cliche but then are so are lots of other items of haberdashery....they are a financial industry thing and as you observe don't hold their knots too well but there's a place for a couple(but not dozens)....I was in the manufacturing world and had/have a great one covered with nuts and bolts....a company I know even had them make their house ties for them with a play on their logo.....and yes the Hermes girls are all cuties of the first rank.

Bill Blass had great style and a good speaking voice, both of which can be seen/heard on a Charlie Rose clip on YouTube. I also recommend Blass' revealing and enjoyable biography "Bare Blass." He comes across as a real solid-citizen.
-Aaron

Joe- Yup, a couple three or four is what I'm gonna whittle myself down to.

Aaron- I just picked up Bare Blass last week. It's a great read. I can't seem to find the Charlie Rose interview on You Tube. Can you provide a link?

Fuzzy - That means a lot coming from you, ADG.

smilla- Thanks but I must tell you - - you have a mind blowing blog. One of the all time greats. Thanks for stopping by.

Looks like the Charlie Rose interview has disappeared. As an alternative, I've found this in-depth interview with Blass from 1983. Over the course of 23 minutes he goes through 3-4 cigarettes and talks about his life, the industry, and his take on American style. It may even be longer than the Rose interview.
http://www.youtube.com/watch?v=pwaSxkK4bcc
-Aaron

Sluice- Yeah, I caught that this morning. I don't think the interviewer is in the league of Charlie but it is interesting to compare the 'stories' Blass leaves alone (HS football player) versus his confessions in his very honest book.

Thanks for that interview. I very much enjoyed that. Too cool that you did that.

I picked up a copy of Bryan's book in Rizzoli yesterday.....a nice addition to the coffee table assemblage,

A great book and resource. Thanks for introducing the man behind it with an insightful interview. As I love to quote: "That's sense Withnail."