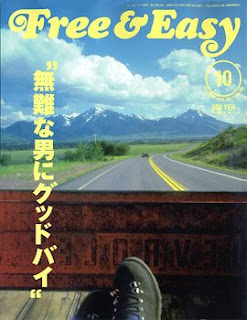 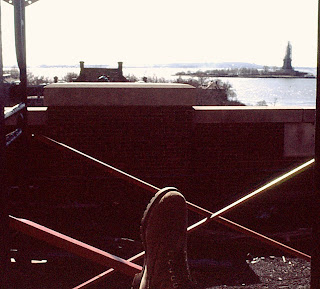 The Free & Easy cover for October 2008 (which features the Abercrombie & Fitch coat below) reminded me of something. But what? After dropping $14.50 for the magazine at Kinokuniya, a beautiful Japanese book store in NYC, I walked across the street to Bryant Park and consumed the images in about 10 minutes. Not much to read and even less if you can't read Japanese.

Heading up to midtown it hit me. My boot shot from Ellis Island. Yes, it would appear I've been taking pictures of my shoes for many years. The shot of my Timberland work boot was taken circa 1985 from a window high above the Main Registry building on Ellis looking at the Statue of Liberty. This image could also be titled, "Free & Easy."

As a National Park Ranger assigned to the Statue and Ellis, I made $12,500 a year in 1985. While the work wasn't "Free" - - it was "Easy" as the above pic testifies. The best and lowest paying job I ever had. I was able to stretch out a one and half pound can of Dinty Moore beefstew over a week thanks to a 10 pound bag of Basmati rice. I drank lots of tap water. I ate a can of tuna fish for lunch...every day. I was 150 pounds, a 30" waist and in the best shape of my life. Better than the Army. But I was poor. And NYC is no place to be poor. "Rich girls don't date poor boys, J. Gatsby." No shit.

I remember the occasional complaint to other Rangers about how hard it was to date (ie:get laid) in NYC as a poor park ranger. I am now told by an old Ranger Buddy my complaints were hourly. He's still with the Park Service and mentioned to me the upcoming Park Service documentary by Ken Burns. I suggested a major film star, Martin Sheen, could read my letters as voice over, describing my lonlieness and desire for female companionship (ie: get laid) while assigned to the Statue and Ellis. My Ranger buddy replied, "Don't you mean, Charlie Sheen?"

When the Statue was closed to the public, I was transferred to Ellis Island and worked as a Museum Technician on the artifact removal. That is, everything on Ellis was packed up and moved to a warehouse somewhere in Manhattan. This allowed me to purchase a pair of steel toed boots courtesy of the federal government. God forbid, I drop something on my foot and file a disability claim for that whopping $12,500 job.

I went to a number of shoe stores and was overwhelmed with just how ugly work boots were. Not that they've changed much. It was in one store I saw the Timberland boot. I fell in love with it. But it wasn't steel toed. So, I bought 'em anyway, submitted the receipt to the Park Service and was reimbursed. I suspect I could've bought a pair of wingtips without any questions.

I still have the same Timberlands 23 years later. They've survived 19 Chicago winters as the only boot I ever wore with a suit. Toasty warm with decent traction on the ice sidewalk in front of the Hancock. Great looking with jeans but something of a statement untied with shorts and a untucked button down somewhere on the North Shore. A wonderful boot with soul - - I can't wear them without a strange desire for some Dinty Moore.
Posted by tintin at 22:00

For those who prefer properly spelled words:

Sadly, where I live, the gangstas have appropriated Timberland as one of their preferred brands.

You write dirty really well...
Moved from NY to SF. This is where San Francisco and the beaches around the bay area (in those days late 70's, early 80's) were bitchin'. Rich girls loved us hard cases in shorts and timberlands...sans shirt working on fire breaks along the coast.

Damn, ..mine only held up 21 years...but due to a really upset ex-wife, instead of poor workmanship. Of many amorous regrets, lost and viciously treated works of American craftsmanship really top the list.

BTW, I bought a replacement pair of Timberlands for the authorized shop here in Rome about 7 years ago. Been wild boar hunting, volcanic thermal bathing (with girls), mushroom and truffle hunting (with crusty old men who still get laid), and they're holding up alright. Guess where these Timberlands were made...Yugoslavia! It doesn't even exist anymore. But those photos of yours bring back so many memories.

That's really cool when you can find a photo you took that reminds you of one that someone else has published. It's happened to me a couple of times, too.

As for the ancient boots, I had a pair of Italian ones that were older than yours! I hiked the Swiss Alps in them. They aged into unwearable rawhide doorstops. I finally got rid of them. My wife was happy. Almost kept the laces, but realized that would be just a little too strange. The things men hang onto...
-DB

Great post! I love the way you write. I love this story and that you still have the boots. Especially "untied with shorts and an untucked button down"!

ten years or so ago, i bought a pair of the yellow timberland work boots from a sporting goods store that was going out of business. i rarely wore them mainly b/c i felt funny doing so considering their ubiquity with hip-hoppers and stashed them away.

recently, i inherited a record collection that included simon and garfunkle's greatest whose back cover has a pic of art wearing a nicely beat-up pair of clarks desert boots and paul wearing a pair of yellow work boots (the year of the album, 1972, precludes timberland i believe). liking the look, i decided to dig out my timbs and lo and behold, mine are made in the u.s.a. from "imported components."