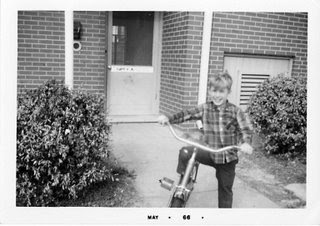 Mom on the Run at http://abnormallynormal2007.blogspot.com/2008/09/dear-neighbor.html had an issue with a rude and thoughtless neighbor. It got me to thinking how Trad Dad resolved a similar issue with a neighbor many years ago. That's me in the picture back in those Madras filled days of 1966. It was on this very spot at Ft Bragg... or was it Ft Bliss. Maybe Ft Sill. Anyway, it's not important. Suffice it to say, we were living on post during the height of the Vietnam War. It was crowded. Quarters were few and far between and even though Trad Dad was a captain we were quartered in senior enlisted housing. One can only hope they have since been torn down. But knowing the Army - - I doubt it.

Early one morning I watched as Trad Dad stuck the first of many little white flags into our front yard. Made from wire coat hangers and a bed sheet these flags, over a week's time, began to fill our postage stamp of a yard so much that it began to look like a putting green. After a couple of weeks Trad Dad invited the next door neighbor over for a late afternoon BBQ. Earlier in the day Trad Dad treated me to a top down drive in the Berkley (a chain driven British sports car that rarely ran) and slot car racing at a hobby track in Fayettville. I remember lusting for a Batmobile slot car but Trad Dad would have none of that. Instead, we raced a blue Ford GT 40 with a Cox hand control. It also rarely ran.

Later in the afternoon the neighbor and Trad Dad are drinking beers on the back yard (4x6) patio when the neighbor laughingly asks, "Hey, what's up with all those flags in your front yard?" Trad Dad slowly turns to him, takes a long drag off his cigarette and replies through exhaled smoke, "That's where your dog shits in my yard." Years later, when I tried to understand "Passive - Aggressive behaviour, I would think back to this story that had turned into a family legend. There you go, Mom on the Run. Sometimes a little Passive-Aggresive is just what a neighbor needs.
Posted by tintin at 18:03

Even though I had heard the story years ago... I am in tears it's still funny. Your dad is the original "piece of work"! ME

I am the queen of passive-aggressive. Sounds like a plan.

Passive-Aggressive requires that you "face" the culprit in some way, not just get even by sneakily tossing crap on their lawn or doorstep.
So, here's another example from many years later:
Anne and I were parked long term in an RV Club affiliated park. I detected the Park Manager's dog running loose and crapping on my doorstep.
I told manager about it in a nice way. He denied it in a nice way. (Real RoVers, as opposed to common RVers tend to be courteous.)
For some days, I then took polaroids of his dog doing the dirty deed, and daily picked up the poop and deposited it in a plastic-lidded refrigerator container 'till I had a full load. I then packed the reefer container in a UPS carton along with the photos.
I taped an "open first" envelope to the UPS box with a note from us (on official Club stationary) with names on letterhead, advising that as paid Club Staff Members, we were not allowed to accept gratuities from members and were returning same so they might be used by others.
Manager read note, then opened UPS carton. Not the brightest light in the string, as he began to open reefer container, his wife warned him not to. He ignored her with predictable results (from an open container of poop that had been in the New Mexico heat for a few days).
Nothing was later said by any of us. Relations remained cordial with no arguments, harsh words or fist fights. And the manager saw to it that the dog's toilet was adequately handled.
Diplomacy works.

This entire mini thread of memoirs has left me stunned. It makes me wish I ha d a lawn, and that my neighbors had a dog full of poop.

This story is a CLASSIC. Loved it. Thanks.

You were at barney's yesterday right? I noticed the shoes...

What did you think of RRL's new roll out?

Your parents wouldn't let you have a Stingray either? What was up with that? My parents were totally anti-Stingray.

What a fantastic idea. Our problem is not our next door neighbors, but our other "neighbors" who walk their dogs on our front lawn. I am going to give it a try. Best, Becs

Passive-Aggressive. Extract from Cecil Adams in straightdope.com (a most valuable site for info on about anything).
"...once you delve into the history of the term, you realize that -- at least in the eyes of its critics -- it's mostly useful as a high-flown way to call someone a pain in the ass."
Important reminder: You need to confront the culprit, but NOT violently. Here's a perfect example:
There's great competition among the various Military "elite" units.
Thus, two Navy Seals board a shuttle flight. One sat in the window seat, the other sat in the middle seat.
Just before take-off, An Army Special Forces Green Beret got on and took the aisle seat next to them. He kicked off his boots and was settling in when the Seal in the window seat said,"I think I'll get up and get a coke."
"No problem," said the Green Beret, "I'll get it for you." While he was gone, the Seal took the SF guy's boot and spit in it.
When the Green Beret returned with the coke, the other Seal said, "That looks good, I think I'll get one too."
Again, the Green Beret obligingly went to fetch it and while he was gone, the Seal picked up the other boot and spit in it.
The SF guy returned and they all sat back and enjoyed the short flight.
As the plane was landing, the Green Beret slipped his feet into his boots and knew immediately what had happened.
"How long must this go on?" he asked. "This fighting between our groups? The hatred? The animosity? This spitting in boots ...and pissing in cokes?"

stingrays were for punks. Ten speeds were for kids who grew into Captain America. I had a stingray, I know.