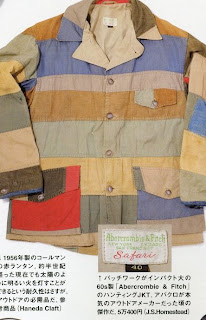 I'm not even going to discuss the A&F of today. Not when there's so much to say about this magnificent and unique coat. I don't know if there are any designers who read this blog but if there are...listen up...I would pay a small fortune for a coat like this. And I'm cheap.

There's an echo of the Hudson Bay blanket coat going on but this is so much its own style. A real statement to say the least. Perfect for fall and wide wale corduroys in a tan or corn or blue or red. Hell, this'll go with anything. We talk about Trad and Ivy and Preppy but it's so hard to describe beyond the simplicity of the sack coat, plain front chinos and Weejun mentalities. This coat speaks volumes to me. Rustic. Not American but North American. This is where Ruff Hewn was going in the 80's. It came close but never anything like this.

A note about who I stole this from...Heavy Tweed Jacket is a blogger from the North Shore of Chicago and who now resides in Japan. He's one of the best bloggers I've run across and has a tremendous archives of catalogs and magazines with an Ivy bent. I swiped this image from HTJ's blog and it's from a Japanese magazine. I must admit to being a big fan of Japanese clothing and shoe magazines. They present American classic attire like no one else. Better than anyone in this country could ever do... which isn't really saying much. Seems as if we're falling apart at the seams. Anyway, check out Heavy Tweed Jacket here. http://heavytweed.blogspot.com/ He ain't Heavy - - He's my brother.
Posted by tintin at 16:58

I remember Ruff Hewn, whatever happened to them? I liked their cords. And Abercrombie: don't get me started.

Cool jacket. Looks kind of like something Ralph Lauren could knock off. Something that would look better after about 10 years.

Hello Tintin, Thanks for your comment, I love the wheelchair part! The coat is not my favorite.
Best, Becs

Also glad that Heavy Tweed is back! Best, Becs

Often the vintage items for display in Free and Easy are actually for sale at a number of vintage shops in Japan. You might be able to get your hands on the actual jacket pictured.

Hunter S. Thompson used to wear that same jacket in his Fear and Loathing period.

Check out the Wikipedia entry on Thompson and it shows a picture of him wearing the jacket in 1971. It obviously goes back a ways.

Oh Hey...
Three thoughts;
I don't know about this jacket.
It kinda reminds me of a cover on canine bedding I once saw in Stafford's....sorry.
Secondly,one would have to ask,"Am I wearing the jacket or is the jacket wearing me?"
Third, HST probablly never realized he was wearing this item!
ME

Anon, Cheers for the compliment. That HST wore the jacket sorta' just seals the deal for me. Besides, having a jacket like that is like having a perfect lie, the right club, the potential for eagle, and there is just a big old tree and bunker in the way. You gotta' 'work the shot.' That jacket is a shot that just gotta' be worked.

Tintin, thanks for keeping the dialog going on this!

Oh, thank you for posting this. We *so* needed it after this particular Monday.

All we can say is that we remember the days when going to A&F meant being frightened of the stuffed bears and other animals in the store. For those who don't know what we are talking about, they really were a store outfitting those who went fishing... hunting... camping... on safari... etc.

Yesterday we hauled out the turtlenecks for the season including our bright red A&F one from this era, still in fine shape to wear. We would probably pay a sinful amount for A&F unused t-necks of this genre. Sigh.

We will live to fight another day thanks to your post.

You should have seen the patch tweed version. I think each had lower back external entry game pockets, not monopoly. Could possibly have been made by W&G for A&F. Buffy.

The stepchild of Rough Hewn was last spotted at Stein Mart a few years ago. Buffy.

Crazy jacket man! I do not think I could carry it off.

But, totally off topic, Tintin, I cannot thank you enough for the tip to Le Veau d'Or. I am going to do a piece on it but there were two couples there last Friday when I arrived and then a table of five came in later. I LOVE that place and I will return there every time I go to NYC. My meal was fantastic. I just love everything about it. I half expected to see you there. Maybe you WERE there.

My goodness, I am amazed. This is so vastly non-Abercrombie and Fitch-sculpted and I just love that!!

funny how many people are still into this kind of thing, yet the companies refuse to hear the cries. feels like nooones willing to make money of this kind of thing, and it always gets me thinking if I had alot of money Id start manufacturing stuff like this!

oldschool- I'm with you. Aside from the Men's Wearhouse customer there must be demand for this stuff. Heck, A&F could do a "Vintage" collection with stuff from their archives. Mark it up huge 'cause the parents who are dragging their 15 year olds thru the place could afford it.

tried to view Heavy Tweed and it doesnt exist anymore!!

any one know if he has a new site?

Tweed should be back soon. I understand he's taking a break.

I just found an original in a friend's father's closet. Do you know where I can sell it?

You can sell it to me. I would love to buy this jacket!!!
email me on:
toxikcandi@hotmail.com