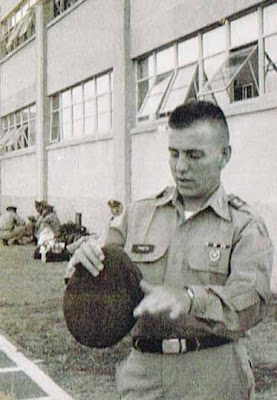 "... You, age 6 or so, had seen me play records, but didn't notice the power had to be turned on. You managed to get a disc on, but nothing happened. You tried turning the disc by hand; nothing. You then continued turning by hand while pressing very hard on the cartridge; nothing except you destroyed the very expensive cartridge and almost the player motor. I think I came very close to driving you 100 miles out in the Mexican desert and dumping you."
FMT

He supposed it was Bliss. He was six and crew cut. His father was 28 and crew cut. One hot El Paso Saturday afternoon, he filled an empty brown beer bottle with water and joined his father and a neighbor on the small concrete porch. Their surprise turned to laughter when he sat next to them and tilted the bottle back. It was the first time he saw light in his father's dark brown eyes.

Little was said when his father came home. He heard the shaking of ice and knew it was a cold gin martini. Always Beefeater. He studied his father's after work ritual of a sipped martini and an inhaled cigarette for years. 44 years later that ritual turned into throat cancer. He would win that battle but lose the war. Too scarred and decimated from the chemo. Too pissed off to quit smoking or drinking. Too proud to allow his children to see him.

His father didn't give a crap what anyone else thought. A salesman sold him a car and threw his arm across his father's shoulders. "Take your fucking arm off me." said his father. Lots of things tried to kill his father -- Quiet pride got the job done but not before there was laughter.

Tintin, this was very nice. I'm sorry for your loss, but the loss is only physical. They're always with us. Their stories become our stories. Here's to your dad.

Sadness seems to have sharpened your writing. Your candid and insightful observations about your dad are refreshing.

I'm sorry that I don't have your way with words. My sincerest condolences.

having just today lost a much loved dad of a much loved ex girlfriend, and also having a brother estranging himself quite strangely- im finding your writing a real balm right now...
keep keeping on... -zamboni

I suspect that choosing words is helping you keep a lid on things even as the air has been knocked out of your lungs, just keep writing, and when you step away for a moment please know that you gave your Dad a lovely memorial long before he died, right here at The Trad you memorialized your father in a touching, elegant manner. We, and he, read what you said, you honored him in life, what a gift that was, what a wonderful sendoff you gave him.

This is really fine writing. I loved it.