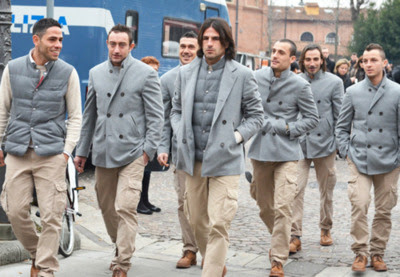 "With Italian Fashion, sometimes you just have to say, "Why not?"...Making sure no one can answer, "Here's why not." Robert Bryan
Posted by tintin at 12:04

Ladies and Gentlemen, The Italian Olympic Curling team modeling their new team uniform for the 2014 Winter Games in Sochi, Russia

Something's going right for em. They get laid more than any of us and don't consider a meal a meal unless it consists of five or more courses.

Are you certain there's not a mixup in pix? Aren't those Bosnian P.O.W.s?

They look like inmates at the Old Navy Prison Camp. Twenty minutes of daily free time in "the yard" and all they do is smoke cigarettes and whine, while the industrious would be digging tunnels and and visually scouring the razor coils for weak spots.

I bet those jackets are 100% cashmere and retail upwards of $1000. I'll do time in the prison camp that outfits the inmates in cashmere.

Tone Loki - Thanks for the image. I think Bryan's quote was better than, "How come all noncomformists look alike."

GSV- You'll have to surrender a lot. To God knows who.

NC Jack- We've concluded they're POWs. Doesn't matter where they're from or who they're following.

Sheik- Just keep your back to the walls in the shower and don't pick up any dropped soap.

people will rather blend to a trend instead of starrting one. It looks and smells like cucinelli! The sad thing about the clothing business today is that everyone wants to look the same. But i get what cucinelli is doing.

Damn italians- even look good when they look ridiculous..sprezzafriknturra -zamboni