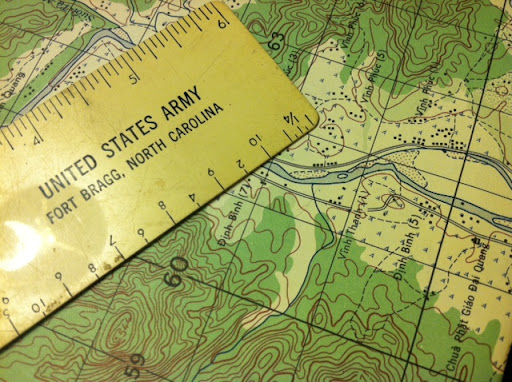 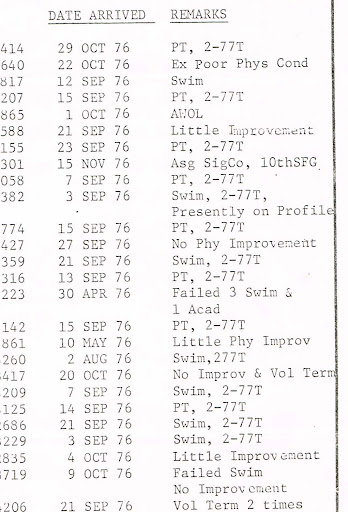 The main post pool was divided into 10 lanes. At both ends were 10 NCOs wearing green berets with the white training cadre flash. The test consisted of two surface laps in fatigues and boots. No kicking off the side. I thought it would be fun to do the laps underwater.

I earned the senior life saving card in high school. I told the old man who promptly suggested if I ever swam out to save someone I should take a 2"x4" with me. "Why?" I asked. "Cause when people are drowning they're gonna look at you like you're the pier." he said.

Half way across the pool my boots and fatigues turned into anchors. What was an easy underwater lap, with air to spare in trunks, was turning into no air with a quarter length of pool to go. I frog kicked harder and swam to the surface breaking water and gasping in front of a sergeant watching my lane. He smiled down at me, "Nice one, smart ass. Now swim back underwater."

My father reached the river that ran by Vinh Thanh and saw two bodies floating on the surface. He knew what happened before anyone said a word. An officer was drowning. A sergeant went to his rescue. The officer took the sergeant down. Two men dead because one man didn't take a swim test.

I nodded to the sergeant and went back down. I made it a quarter of the way before surfacing. I looked back to see the sergeant laughing and side stroked the rest of the lap. Checked off a clip board, I squeaked to the showers for a change into dry fatigues.

He stood in the locker room waiting for me. Parker was a medic and friend from East Texas. He asked if I would wear his shirt and swim his laps. No one would ever find out. I remembered my father's men, told Parker no and walked past him. He failed the swim test and never spoke to me again.
Posted by tintin at 13:11

“TinTin, swimming is not what you do best in a pool” ME